It’s become popular lately to attack the Waxman-Markey cap-and-trade bill as yet another giveaway to Wall Street.  In his recent tongue-lashing of Goldman Sachs, for example, Matt Taibbi warned that trading in carbon credits would be the next subprime debacle:

Instead of credit derivatives or oil futures or mortgage-backed CDOs, the new game in town, the next bubble, is in carbon credits — a booming trillion dollar market that barely 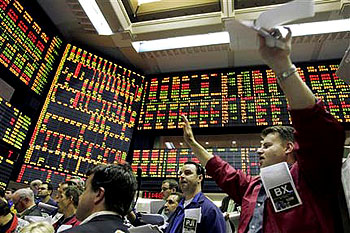 even exists yet, but will if the Democratic Party that it gave $4,452,585 to in the last election manages to push into existence a groundbreaking new commodities bubble, disguised as an “environmental plan,” called cap-and-trade.  The new carbon credit market is a virtual repeat of the commodities-market casino that’s been kind to Goldman.

As you know, I’m pretty skeptical of this.  The market for carbon credits may be big, but it’s nowhere near big enough to cause the kinds of systemic problems that abuse of subprime mortgages did; the derivatives in question are simple ones like options and futures, not CDOs and swaps; and Waxman-Markey has some pretty good language regulating them in any case.  Today Paul Krugman takes up the argument:

Any time you have a market, there’s some opportunity for speculation….So, should fear of speculation lead us to ban trading in wheat? Nobody would say that….Now substitute “emission permits” for wheat. It’s exactly the same story. Why should you address it any differently?

….The prime example of an energy market gone bad is the western electricity market in 2000-2001; and let me say that I have some moral authority here, since I called it when it was happening. That was the real thing — but what made it possible was a combination of at least two factors. First, the demand for electricity was highly unresponsive to prices; second, the relevant markets were fairly small (northern and southern California were isolated both from the outside world and from each other by transmission bottlenecks).

In the case of emission permits, demand will probably be quite responsive to prices — and the market will, as Joe Romm says, be huge.

Read the whole thing. Joe Romm has more here. I’m all in favor of Waxman-Markey containing strong language to restrict fraud and speculation, but there’s no reason tie ourselves in knots thinking that this is another subprime debacle waiting to happen just because it involves commodity trading.  The facts on the ground really don’t back it up.