Sarah Palin is the gift that keeps on giving and giving and giving.  Todd Purdum’s profile in this month’s Vanity Fair was a fairly ordinary takedown with only a little in the way of new revelations, but even so it’s managed to spark a breathtaking amount of vitriol among Republican operatives.  Jonathan Martin reports on what happened after Bill Kristol accused McCain aide Steve Schmidt of speculating during the campaign that Palin’s strange behavior was due to post-partum depression:

Asked about the accusation, 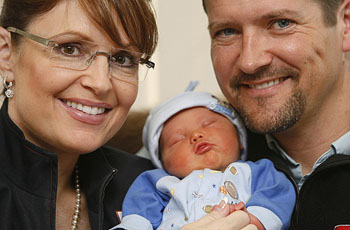 Schmidt fired back in an e-mail: “I’m sure John McCain would be president today if only Bill Kristol had been in charge of the campaign.”

“After all, his management of [former Vice President] Dan Quayle’s public image as his chief of staff is still something that takes your breath away,” Schmidt continued. “His attack on me is categorically false.”

Asked directly in a telephone interview if he brought up the prospect of Palin suffering from post-partum depression, Schmidt said: “His allegation that I was defaming Palin by alleging post-partum depression at the campaign headquarters is categorically untrue. In fact, I think it rises to the level of a slander because it’s about the worst thing you can say about somebody who does what I do for a living.”

But Kristol’s charge was seconded by Randy Scheunemann, a longtime foreign policy adviser to McCain who is also close to the Standard editor and was thought to be a Palin ally within the campaign. “Steve Schmidt has a congenital aversion to the truth,” Scheunemann said.

….Responding to Schmidt’s counterattack, Kristol directly fingered Schmidt: “It’s simply a fact that when the going got tough, Steve Schmidt trashed Sarah Palin, both within the campaign and (on background) to journalists. This was after Steve took credit for the Palin pick when, at first, he thought it made him look good. John McCain deserved better.”

At this, Schmidt unloaded in a lengthy telephone interview, suggesting that Kristol was carrying out a personal vendetta based out of anger over the attempt to fire Scheunemann in the final days of the campaign.

There’s only one proper response to this: Palin/Sanford 2012!  Drill baby drill!