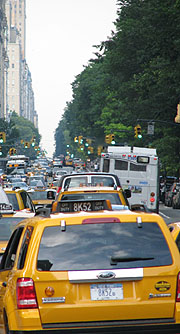 Sarah van Schagen wants to know how to talk to a cab driver about cap-and-trade.  Matt Yglesias responds:

The main point has to do with car ownership. One good reason to take a cab somewhere is that you don’t own a car. Conversely, one good reason to drive somewhere is that having already bought a car you’ve incurred the bulk of the costs involved in driving anyway. So if you nudge people toward less car ownership, you’ll end up with fewer total vehicle miles traveled but more cab riding. It’s win-win. More generally, insofar as people live in denser patterns of settlements (which cap and trade certainly encourages) that’s more business for cab drivers.

Well….OK.  But I’d take this question a little less literally: not “what’s in it for cab drivers,” but “how do you convince an ordinary schmoe that higher energy prices are worth paying”?

Which is, admittedly, a very tough question indeed.  Unlike plain old regulation, in which the costs to consumers are hidden, cap-and-trade brings it right out in the open.  The whole point (well, one of the points) of cap-and-trade is to raise the price of conventional energy so that people will use less of it.  But who wants to volunteer for a higher electric bill or a more expensive fill up?

One tack, obviously, is to emphasize that your electric bill is likely to go up only modestly and that you’d get a rebate check that would cover some or all of the increase.  Another would be to point out that some of the money will be used to subsidize cleaner energy sources, something that most people support.  A third alternative is……

What?  Let’s face it: this is a hard sell.  Global warming is a long-term problem that’s hard to get people genuinely hot and bothered about.  What’s worse, self-interest is far and away the most potent political force there is, and when policies leave the realm of airy rhetoric and enter the realm of kitchen table reality it’s pretty hard to persuade people to vote against their self-interest with only a fig leaf and some righteous wonkitude as cover.

So I dunno.  Just keep plugging, I guess, with the understanding that there are a large number of people who won’t ever be convinced to sacrifice even a small amount in return for a better planet in the future.  For people like this, it’s probably best just to move on and save your energy for someone whose mind is yet to be made up.

Unless, of course, you have a better idea.  Which you might.  I remember once trying to explain something to a group of order entry clerks and having no luck.  They just didn’t get it.  But the manager of the group understood what I was getting at and rephrased it in a way that wouldn’t have occurred to me in a million years.  Immediately they all nodded their heads.  Mission accomplished.  So maybe all we need is the right translator.