Banks that want to exit the TARP program have to do more than just pay back the money they received from the government.  They also have to buy back the warrants they issued as part of the initial deal.  But some bank CEOs are unhappy about this, and Jamie Dimon, CEO of JPMorgan Chase says that the Treasury should cancel half the warrants it holds “out of fairness.” Tim Fernholz isn’t amused:

Are you kidding me? The taxpayers went on the line to bail the banks out during a financial crisis produced by the banks’ own excess, and now they think that debt should be canceled “out of fairness.” Yikes. Luckily, the Treasury seems to be growing into a tougher negotiator after some initial criticism from Congress, and may be thinking about 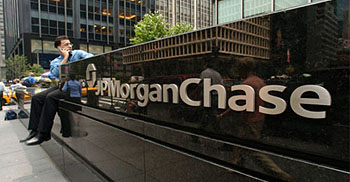 auctioning the warrants to third parties to drive up prices further. Or, if the banks don’t want to buy them back right now, they can remain under stricter regulatory supervision until the entire financial regulation apparatus is overhauled this summer.

Unfortunately, Dimon has a point, thanks to the way that Henry Paulson decided to handle the bailout in the first place.  Instead of pumping money only into troubled banks, he insisted on pumping money into all the big banks, whether they wanted it or not.  Ever since, this has given some of the banks a pretty justified excuse for complaining about the restrictions they were placed under, and this is just more of the same.  Why should Dimon have to buy back a bunch of warrants when he was an unwilling participant and only surrendered them in the first place because Paulson insisted on it for the good of the country?

Now, as it happens, there are some pretty good reasons for going ahead and making JPMorgan pay up.  They may not have wanted the TARP money, but they made (and continue to make) eager use of zillions of dollars in other Fed and Treasury programs.  So shed no tears for them.  That said, we wouldn’t even be having this discussion if Paulson had handled the bailout better.  His excuse at the time for the scattershot approach was that he didn’t want to single out any particular bank for TARP funds since that would advertise to the whole world that they were insolvent and might lead to a market panic.  But no one was fooled.  The market knew perfectly well who was in bad shape and who wasn’t.  And when Citigroup and Bank of America went back to the well a second time — an obvious sign of distress — the markets just yawned.  There was no panic, no selloff, no nothing.  Ditto for all the smaller banks that have accepted TARP money.

What’s more, a more targeted approach would have cost less.  Instead of $125 billion, the first-round tab probably would have run to something like $60-70 billion or so.  It would have been a better deal all around.

But that’s not what happened, so now Jamie Dimon and his pals get to mouth off about how unfair life is.  Thanks, Henry.