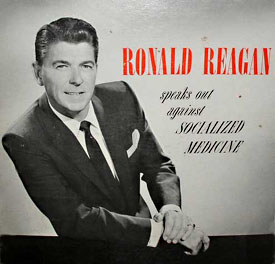 The AMA has announced that it will oppose the creation of a public option in any kind of healthcare reform.  This is not exactly a shocker, since the AMA has opposed pretty much every step toward national healthcare ever proposed — including Medicare.  Remember Operation Coffee Cup?

Still, they really ought to have better reasons than this:

In comments submitted to the Senate Finance Committee, the American Medical Association said: “The A.M.A. does not believe that creating a public health insurance option for non-disabled individuals under age 65 is the best way to expand health insurance coverage and lower costs. The introduction of a new public plan threatens to restrict patient choice by driving out private insurers, which currently provide coverage for nearly 70 percent of Americans.”

If private insurers are pushed out of the market, the group said, “the corresponding surge in public plan participation would likely lead to an explosion of costs that would need to be absorbed by taxpayers.”

The AMA’s love affair with private insurance companies is truly a thing of wonder.  It’s like these guys have collective Stockholm Syndrome.  Or collective battered wife syndrome.  Or something.  Given how much misery private insurers cause for most doctors, I sometimes wonder what they’d have to do to finally cause the AMA to turn on them. Start paying all claims in zlotys?  Demand that doctors have bar codes tattooed on their foreheads?  Insist that all waiting rooms show nothing but reruns of House?

Probably not even that.  Doctors must figure that the more pain private insurers cause them, the more it shows they really love them.  So back to the arguments, such as they are.  (1) A public plan wouldn’t drive out private insurers unless it turns out that private insurers are actually less efficient than the post office.  In which case they’d deserve it.  (2) Nor would a public plan restrict choice — unless the AMA’s members deliberately tried to sabotage it by refusing to participate.  (3) And there would only be a surge in signups if the public plan turned out to be a better deal, which would likely mean lower overall costs even if a greater percentage of those costs was paid for out of taxes.

But who cares?  Honestly, if the graybeards of the AMA didn’t oppose a public plan it would probably make me rethink my support for it.  The fact that they are opposing it just means that all is right with the world.

UPDATE: Apparently the AMA is backing off slightly on its opposition to a public plan. They now say they’re willing to consider “a federally chartered co-op health plan or a level playing field option for all plans” — whatever that means.  Sounds like pretty weak tea to me.  I think we can still safely say they’re opposed to anything that would have a serious chance of being effective.