Ezra Klein writes about the federal response to the banking crisis:

Recently, I asked an administration official which government program we’d remember as making the most difference in averting catastrophe. Where will the history books place the credit?

“It’ll be the Federal Reserve,” he replied. “It’ll be 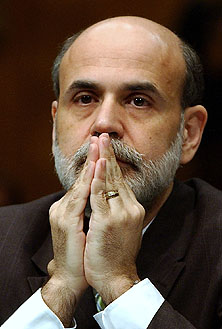 their decision to increase the size of their balance sheet from whatever it was before the crisis to whatever it is now.” The Fed’s decisions, of course, have attracted relatively less press coverage, both because the Federal Reserve doesn’t speak to the press as often as the Treasury Department and because new Federal Reserve policies don’t spark tiffs with the Congress, or the Republican Party, or outside economists. As such, the Fed is a bit harder for reporters to write about. But there’s some evidence that it will be Ben Bernanke, rather than Tim Geithner, who our children — at least our nerdier children, the ones who study the recession of 2009 — will read about.

I don’t think there’s any question that this is right.  Both TARP and the stimulus bill were important, but the trillions of dollars in alphabet soup programs from the Fed have dwarfed them both.  Their relative obscurity in the mainstream media, however, probably has less to do with the Fed’s low profile or lack of political fireworks and more to do with the fact that these programs are just really, really hard to describe in understandable terms.  It’s not impossible to explain the impact of term lending facilities or guarantees of the commercial paper market, but it’s a helluva lot harder than explaining a bank bailout or a hundred billion dollars in infrastructure spending.

Regarding Bernanke, though, it’s well to remember Richard Posner’s pithy summing up of his performance: “He is like a general who having been defeated in battle because of his errors manages the retreat of his army competently.”  I’m still not sure that even the retreat was managed all that competently — there might well be additional financial shoes to drop over the next year — but even if it turns out that the worst is behind us, both of these sides of Bernanke’s crisis management are part of his legacy.  It’s still not clear what the history books are going to say about Bernanke and his Fed.