This is a little embarrassing to admit, but by yesterday I’d gotten so tired of the AIG story that I barely even noticed the details of the House bill to claw back all the bonuses.  But it’s a monster.  Taxing the million-dollar bonuses is one thing — I may be a little ambivalent about that, but overall I don’t think it’s all that problematic — but the bill that passed last night taxes away bonuses from anyone with a household income over $250,000.  That’s a couple of mid-level analysts.  This is likely to hit tens of thousands of fairly ordinary workers who had nothing to do with AIG’s troubles and who simply don’t deserve this kind of treatment. 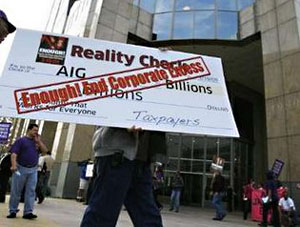 A friend of mine who describes herself as “Marxist at heart” but has nonetheless been trying to convince me all along that the tax clawback idea is a horrific idea, points me to this article in the Post today about how AIG employees are reacting to the death threats and armed security guards in the parking lots:

A sense of fear hung in the room — the palpable, unsettling kind that flashes across people’s eyes. But there was anger, too. No one would express it publicly, of course. Who wants to hear a wealthy financier complain? And yet, within those walls off Danbury Road lies a deep sense of betrayal — first by their former colleagues, now by their elected leaders.

The handful of souls who championed the firm’s now-infamous credit-default swaps are, by nearly every account, long since departed. Those left behind to clean up the mess, the majority of whom never lost a dime for AIG, now feel they have been sold out by their Congress and their president.

“They’ve chosen to throw us under the bus,” said a Financial Products executive, one of several who spoke on condition of anonymity, fearing reprisals. “They have vilified us.”

They say what is missing from this week’s hysteria is perspective. The very handsome retention payments they received over the past week were set in motion early last year when the firm’s former president, Joe Cassano, was on his way out the door. Financial Products was already running into trouble on its risky credit bets, and the year ahead looked grim. People were weighing offers from other firms, and AIG executives feared that too many departures could lead to disaster.

So AIG stepped in with an offer to employees of Financial Products. Work through all of 2008, and you’d get a lump payment in March 2009. Stick around through 2009, and you’ll get paid through 2010. Almost all other forms of compensation — bonuses, deferred payments and the like — have vanished.

“People are trying to do the right thing,” the same Financial Products executive said. “Guys have worked their [tails] off to try to get value for the taxpayer. This isn’t money that’s being advanced to us. People have performed the work and done it exactly as we asked them to do.”

I don’t know what the Senate will do with the House language, but they simply can’t leave it the way it is.  A high marginal rate on million-dollar bonuses at bankrupt companies is one thing, but putting huge swathes of their professional staff in the same boat is another.  If this is where populist outrage is taking us, it’s time for a timeout.