Is AHIP, a health insurance trade group, really in favor of universal healthcare?  They say they’ve had a change of heart and now support the idea, but Michael Hiltzik is skeptical:

As a connoisseur of health insurance lobbying practices, however, I withheld judgment until I could scan the fine print. What I found by reading AHIP’s 16-page policy brochure was that its position hadn’t changed at all. Its version of “reform” comprises the same wish list that the industry has been pushing for decades.

Briefly, the industry wants the government to assume the cost of treating the sickest, and therefore most expensive, Americans. It wants the government to clamp down hard on doctors’ and hospitals’ fees. And it wants permission to offer stripped-down, low-benefit policies freed from pesky state regulations limiting their premiums.

As for universal coverage, which is the goal of many reformers (if not yet the Obama administration), the industry will accept a government mandate to take on all customers, as long as all Americans are required by law to buy coverage.

Who wouldn’t love a deal like that?  Just like Coca-Cola would be delighted with a government mandate that it sell cans of Coke to all comers in return for a government law requiring everyone to buy cans of Coke.  Ka-ching! 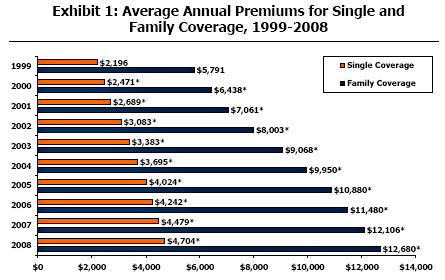 But Ron Brownstein says that AHIP’s members might be willing to compromise here, promising not only to insure all comers, but to do it at a fair price.  Not the exact same price for everyone, but close:

[AHIP’s Karen Ignani] suggested an arrangement in which insurers and the government in effect would divide the cost of insuring the biggest risks through a combination of rating reform and public subsidies. “You have to think about the ratings and the subsidy in tandem,” she argued. For instance, she noted, a pure form of community rating — in which everyone is charged the same premium regardless of their age or health status — would substantially increase rates on young healthy families (while reducing them on older or sicker people). In that instance, “you might decide well then we could subsidize those [young] individuals to cushion that,” she said. Alternately, she said, you might allow insurers to vary rates somewhat based on age, but use subsidies to ensure that say, “nobody over 55 would have to pay more than 10 per cent of income” for premiums — as California did in its reform. More details on the issue are coming: “You will hear a great deal from us soon about rating,” she said.

This all comes via Ezra Klein, who thinks it’s quite possible that insurers are serious about this.  Unfortunately, he also argues that this is the easy part of a healthcare deal: the hard part is dealing with pharma, doctors, and hospitals.  Details here.