HONEYBEES!….I’m back! Not really at a hundred percent or anything, but in good enough shape for blogging. And I have to say that my timing was pretty good: all I really missed was a fantastic amount of teeth gnashing (tooth gnashing?) over Barack Obama supposedly losing control of the stimulus bill. And I admit that my teeth were gnashing too for a while. But I have to say that with the benefit of thinking about this for a few hours rather than a few minutes, it’s pretty obvious that people are overreacting. Yes, Republicans are acting like Republicans, and sure, Obama is going to end up making some compromises. But that’s what he said he was willing to do all along. So really, what’s the big deal? It’s going to work out OK within the next few days, and I’ll bet the Senate ends up adding about as much stuff as it takes out. So chill.

But speaking of Republicans acting like Republicans, Michael Hiltzik has dredged up a good one. Apparently Neil Cavuto has been carrying on for the past week about an item in the stimulus bill he calls “honeybee insurance,” 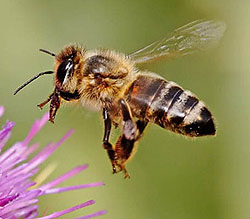 and Mitch McConnell and David Vitter have joined in on the Senate floor to mock this disgraceful waste of taxpayer money. It’s shocking! Now, you will be unsurprised to learn that the program in question isn’t honeybee insurance at all, it’s disaster insurance for all livestock producers. But that’s not the best part. This is:

The provision simply continues a program enacted by Congress last year, overriding a veto by President Bush. In other words, the Senate voted on it twice in 2008 — once to enact and once to override. Connoisseurs of political comedy will see the punch line coming: McConnell and Vitter voted yea both times.

So it turns out that McConnell isn’t really against honeybees. He’s only using them to pretend that he’s got a principled objection to a stimulus plan aimed at pulling the country out of the most severe recession in decades.

Ladies and gentlemen, your Republican Party. Country first, as always.