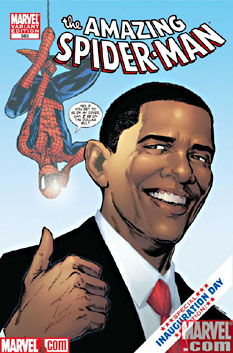 WAITING FOR TUESDAY….Ramesh Ponnuru thinks the Obama celebrations have gotten a wee bit out of hand:

At least one segment of the economy is booming: the market in Obama kitsch. The dedicated supporter of the incoming President need not content himself with a T shirt or bumper sticker. Also available are Obama coasters, lava lamps, jigsaw puzzles, mugs, skateboards, toy trains, CDs, DVDs and, of course, commemorative dinner plates….Marvel Comics is running a special Inaugural issue of Spider-Man.

….There is no recent analogue to the madness — er, hopefulness — that has seized Obama’s fans. Some journalists have been comparing him with F.D.R. and even Lincoln. To find a similar episode of enthusiasm for an incoming President, you might have to go back to 1829….The new President, Andrew Jackson, was his era’s version of change….An unprecedented number of Americans trekked to see him take the oath of office. His Inaugural was a massive party at the White House, one that got so out of hand that Jackson was forced to lodge elsewhere.

I’ll grant there’s something to this. But there’s another side to it: this outpouring of excitement is based as much on relief that George Bush is finally leaving office as it is on optimism about Obama taking over. Obama is obviously a charismatic figure, but if he were succeeding Gerald Ford or Ronald Reagan or George Bush Sr., I don’t think he’d be getting half the adulation he is. But Bush has been a lame duck for two long years now, and public weariness over his chronic and all-too-obvious ineptitude has reached depths seldom seen in a democracy. At this point, people would be relieved and hopeful if Mike Gravel were the one taking the oath of office on Tuesday.

It is both Obama’s good fortune and his bad luck to be taking over from the most hapless president since Hoover. The t-shirts and coffee mugs and other nicknacks may be a little over the top, but they need to be because they’re doing double duty: they’re a celebration of George Bush’s exit as much as they are of Obama’s arrival.