VaR AND THE BLACK SWAN….Joe Nocera has a good piece in the New York Times Magazine today about VaR, the risk model that established a virtual hegemony on Wall Street before the great financial implosion of 2007-08. Nassim Nicholas Taleb, author of The Black Swan, argues that the fundamental problem with VaR lies not in its technical guts, but in the fact that it’s specifically designed to exclude potential catastrophes:

In its most common form, [VaR] measures the boundaries of risk in a portfolio over short durations, assuming a “normal” market. For instance, if you have $50 million of weekly VaR, that means that over the course of the next week, there is a 99 percent chance that your portfolio won’t lose more than $50 million. 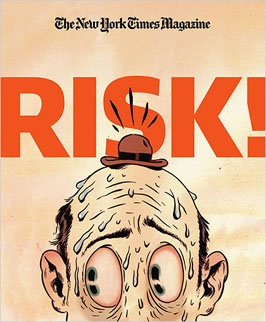 ….VaR is often measured daily and rarely extends beyond a few weeks, and because it is a very short-term measure, it assumes that tomorrow will be more or less like today. Even what’s called “historical VaR” — a variation of standard VaR that measures potential portfolio risk a year or two out, only uses the previous few years as its benchmark.

….Yet even faulty historical data isn’t Taleb’s primary concern. What he cares about, with standard VaR, is not the number that falls within the 99 percent probability. He cares about what happens in the other 1 percent, at the extreme edge of the curve….A good example was a credit-default swap, which is essentially insurance that a company won’t default. The gains made from selling credit-default swaps are small and steady — and the chance of ever having to pay off that insurance was assumed to be minuscule. It was outside the 99 percent probability, so it didn’t show up in the VaR number. People didn’t see the size of those hidden positions lurking in that 1 percent that VaR didn’t measure.

Taleb has been making this argument for quite a while, and obviously events have proven him prescient. But I’ve always had a couple of problems with his critique. First, our current economic crisis isn’t really a black swan, is it? Things like this have happened fairly regularly during the past century (and before), on the order of once a decade at least, and maybe more often than that. Pretending that this was a wildly improbable event strikes me as nothing more than a sophisticated version of “nobody could have predicted.” After all, if the crash of 2008 really was a one-in-a-hundred (or one-in-a-thousand) event, then it really is true that even reasonable people couldn’t have been expected to foresee it.

Second, I’ve never seen Taleb explain what we should do about this. What’s his advice? Here’s Nocera: “Taleb likes to say that, as a trader, he has made money only three times in his life — in the crash of 1987, during the dot-com bust more than a decade later and now. But all three times he has made a killing.” Fine. He’s made money three times in the past two decades. But he knows perfectly well that this doesn’t work on a broad scale. Ordinary trading desks have to make daily trades based on evaluation of ordinary risks. That’s how global finance gets done. So the question is: given the fact that we need ordinary global finance, and not everyone can just sit around waiting to make a killing on black swans, what should all these ordinary trading desks be doing to protect themselves against possible meteor strikes?

Taleb doesn’t seem to say (though maybe he has and I just haven’t seen it), but this is what I’d like to hear more about, especially since he seems to have a lot of interesting and perceptive ideas about the behavioral basis of finance and financial crashes. In the meantime, Nocera’s article is a good read, even if it doesn’t really provide any answers.

UPDATE: Yves Smith pans Nocera’s article here. I’m a little puzzled by a lot of what she says, since it strikes me that Nocera wrote at length about topics that she says he ignored, and in no way wound up “defending a failed orthodoxy.” But maybe I’m missing something.