THE STIMULUS….From the same Washington Post article about the Bush economic record that I quoted below, we also have this:

“The expansion was a continuation of the way the U.S. has grown for too long, which was a consumer-led expansion that was heavily concentrated in housing,” said Douglas Holtz-Eakin, a onetime Bush White House staffer and one of Sen. John McCain’s top economic advisers for his presidential campaign. “There was very little of the kind of saving and export-led growth that would be more sustainable.”

“For a group that claims it wants to be judged by history, there is no evidence on the economic policy front that that was the view,” Holtz-Eakin said. “It was all Band-Aids.”

Agreed — and this is what continues to niggle at the back of my mind. A big stimulus package is all well and good, but suggestions that it should be even bigger and badder than Obama has proposed make me wonder what the end game is. Paul Krugman, for example, criticizes the $800 billion plan on the grounds that it will only make up for part of the output gap caused by the recession, not all of it. 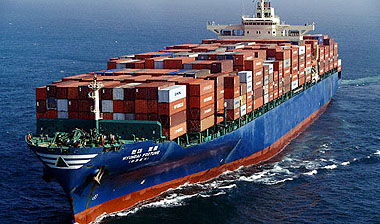 But aside from the practical question of whether we could effectively spend double the amount Obama is proposing anyway, I guess I wonder if we should even be trying to make up the entire output gap with domestic spending. Because there really is some readjustment that needs to happen in the medium term.

For years now the the skyrocketing U.S. trade deficit has been Topic A among economists. The big fear was that the Chinese were shipping us goods and we were shipping them back treasury bills, and this couldn’t last forever. Eventually the Chinese would tire of stockpiling treasuries, the dollar would crash, and all hell would break loose. In the end, that’s not what happened, but it was still the trade deficit that was at the heart of our problem: American consumers went into deep debt to buy all those Chinese goods, the savings glut from China and elsewhere poured into the American housing market, and eventually the music stopped. The dollar didn’t crash, but housing and the American consumer did.

So what’s the end game? Hardly anyone wants to talk about it. And I feel sort of stuck. I’m not an economist myself, and virtually every economist I respect is on board with the idea that the Obama stimulus package is, if anything, too modest. It should be twice as big and last twice as long. Better safe than sorry. That’s hard to argue with, but I still wonder where it’s going to leave us in a few years. With a nice soft landing as the dollar rises but doesn’t implode, or at the top of yet another bubble waiting to pop?