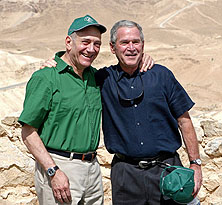 SHOWING WHO’S BOSS….Israeli Prime Minister Ehud Olmert explains how he gets things done when the U.S. State Department is pushing to vote for a UN resolution he opposes:

“I said, ‘Get me President Bush on the phone,’ ” Mr. Olmert said in a speech in the southern Israeli city of Ashkelon, according to The Associated Press. “They said he was in the middle of giving a speech in Philadelphia. I said I didn’t care: ‘I need to talk to him now,’ ” Mr. Olmert continued. “He got off the podium and spoke to me.”

….Mr. Olmert claimed that once he made his case to Mr. Bush, the president called [Condoleezza] Rice and told her to abstain. “She was left pretty embarrassed,” Mr. Olmert said, according to The A.P.

There are, of course, many things you could say about this. But the question that most piques my curiosity is: Why? Why would Olmert tell this story? Sure, he’s bragging for a local audience, but what’s the point? It’s not as if he’s running for anything these days. And he has to know that a story like this will embarrass the American government on a whole bunch of different levels. So why do it? Is he an idiot? Does he just not care anymore? What’s the deal?

UPDATE: The most obvious comment about Olmert’s story, of course, is this one:

“This is terrible for the United States,” said Daniel Levy, a former Israeli peace negotiator. “This confirms every assumption they have in the Arab world about the tail wagging the dog. . . . It’s a story you’re likely to hear quoted there for years to come.”