Both Citigroup and Bank of America are down more than 20% in early trade today, and I imagine that Hank Paulson and Tim Geithner are starting work on yet another weekend deal of some description….I can’t see a solution to this problem short of nationalizing both Citi and BofA, and summarily firing the hapless Vikram Pandit along with the overambitious Ken Lewis.

“Nationalization,” of course, is a dirty word in the United States. We’re a very immature country, after all….But it’s the right thing to do, and that’s been clear for a while now. We can ill-afford to leave the health of the whole financial sector hostage to an ideological distaste for the concept. 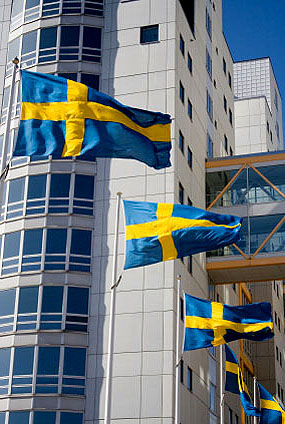 The bandwagon for nationalization seems to be getting up a good head of steam, and whenever that happens it’s worth slowing down a bit and articulating the opposing case. A lot of the sentiment in favor of nationalization appears to be driven by admiration for Sweden’s “quick and decisive” action to clean up its own banking mess in the early 90s, so let’s take a look at what Sweden did and didn’t do. First off, here’s what they didn’t do:

So what did the Swedes do? The main thing was simple: in late 1992 the Swedish government guaranteed all bank obligations throughout the system. They did this immediately for Gota after its collapse, and two weeks later for everyone else.

What else? Not too much, actually. An agency was formed to dig into the portfolios of nearly every major bank, and this resulted in a capital requirement guarantee for one bank that was never used. In addition, the shareholders of Gota and Nordbanken were mostly wiped out.

So what are the lessons for us? First, we don’t necessarily need to nationalize. If we have to, then we have to, but with the exception of Gota that’s not what the Swedes did.

Second, we could consider a systemwide guarantee of all bank obligations, instead of the one-offs we’ve (partially) applied to Citi and BofA.

Third, we still have to take care of the toxic assets clogging up bank balance sheets. The Swedes did this for Nordbanken and Gota by hiving off “bad banks” to handle the valuation and eventual sale of their bad assets. We could do the same thing here, which is basically what TARP was initially intended to do. But whether you call it “TARP” or a “bad bank,” it’s pretty much the same thing, and it presents pretty much the same main problem: figuring out how to value and eventually dispose of the toxic waste. Painful or not, though, it needs to be done, and I never entirely understood the mockery that was directed at this idea back when TARP was initially unveiled. Everyone agrees that recapitalization is essential, but one way or another the other side of the balance sheet needs to be addressed too. This mess won’t get cleaned up until the toxic waste is cleaned up as well.

So is this what we should do? I don’t have the financial chops to say — though certainly government ownership makes the “bad bank” idea a lot easier to implement. But if we think the Swedish model is worth taking guidance from, the path ahead includes systemic debt guarantees, capital injections, a bad bank for toxic waste, and nationalization only as a last resort.