INAUGURATION 7….I’m pretty much aligned with conventional wisdom on Obama’s inauguration speech: It was OK, but not great. The somberness wasn’t the problem. For the most part, that was appropriate. But with a few exceptions, it struck me as a little bit too utilitarian and themeless, sort of a stripped down State of the Union, or even a campaign stump speech. There was nothing badly wrong with it, but neither was it very memorable.

The thing that struck me the most as I was listening to it, though, was the number of shout outs he gave to conservatives. The main thrust of the speech was liberal — building roads, 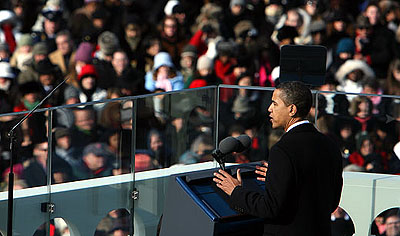 providing healthcare, rejuvenating global alliances, etc. — but there were quite a few spots that seemed specifically crafted to appeal to conservative ears. For example:

For us, they fought and died in places Concord and Gettysburg; Normandy and Khe Sahn.

Nor is the question before us whether the market is a force for good or ill. Its power to generate wealth and expand freedom is unmatched.

We will not apologize for our way of life nor will we waver in its defense. And for those who seek to advance their aims by inducing terror and slaughtering innocents, we say to you now that, “Our spirit is stronger and cannot be broken. You cannot outlast us, and we will defeat you.”

To those leaders around the globe who seek to sow conflict or blame their society’s ills on the West, know that your people will judge you on what you can build, not what you destroy.

To those who cling to power through corruption and deceit and the silencing of dissent, know that you are on the wrong side of history, but that we will extend a hand if you are willing to unclench your fist.

Those values upon which our success depends, honesty and hard work, courage and fair play, tolerance and curiosity, loyalty and patriotism — these things are old. These things are true. They have been the quiet force of progress throughout our history.

I don’t know how long it will last, but so far Obama has spared no opportunity to reach out to conservatives in ways cultural, rhetorical, and political — which shouldn’t be a surprise. After all, it’s exactly what he said he was going to do during the campaign. I wish him luck on this.

Then, after the speech, there was the inaugural poem: Elizabeth Alexander’s “Praise Song for the Day.” Adam Kirsch calls it a perfect specimen of “bureaucratic verse,” and I can’t argue with that. I thought it felt forced and self-conscious throughout. But even worse, it felt like a poem meant to be read, not spoken. The age of thunderous civic verse is long gone, of course, but still: an occasional poem is meant to be heard, not merely studied on a page. This one wasn’t.