FORTHWITH….CQ reports that Nancy Pelosi is planning to limit the ability of Republicans to delay legislation via motions to recommit bills to committee. That would be nice. However, as I recall, Pelosi and Steny Hoyer made noises about doing this a couple of years ago but then backed down. Perhaps they’re more serious this time.

In case you’re curious — and I don’t blame you if you aren’t — here’s what this is all about. Just before the House holds its final vote on a bill, House rules allow the minority party one last motion to recommit the bill to committee. 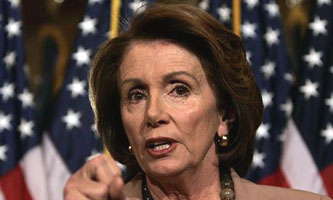 However, if they opt for just a straight recommit, it’s almost certain to get voted down and nothing is accomplished. So instead, they usually move to “recommit with instructions.”

This is where it gets complicated. If the motion requires the bill to be returned “forthwith,” then it’s just a fake recommittal. The bill never leaves the floor, the entire House gets to vote on the amendment immediately, and then the final vote is held.

But if the motion requires the bill to be returned “promptly,” then it really goes back to committee. And given the fact that it’s already probably been in committee for months, and the calendar is packed full of other stuff, this is likely to mean that the bill dies. So the majority party will almost always want to vote down this kind of recommittal.

(Are you bored already with this parliamentary minutiae? Join the club. When Richard Hudson, chief of staff to Texas Republican Rep. John Carter, left the Hill last year, Politico asked him, “What word or phrase do you never want to hear again once you leave?” His answer: “Should this motion to recommit be ‘promptly’ or ‘forthwith’?”)

Anyway. Back to our story. So here’s what happens with these recommittals. The minority party proposes an amendment that will make great campaign fodder. On the reauthorization of the AmeriCorps volunteer program last March, for example, Randy Kuhl proposed language requiring criminal background checks on prospective volunteers. If he were genuinely concerned with background checks, he would have accepted “forthwith” language and allowed a vote on his amendment, which probably would have passed. But he didn’t. He insisted on “promptly” language instead. Why? Because he knew that the majority would resist delaying the bill by sending it back to committee, and that’s what he was really after. He wanted to force them to vote down his motion so that Republicans could all go home and claim that Democrats had voted against background checks on AmeriCorps volunteers.

Dems, of course, would explain that they weren’t against background checks at all, and they would have voted for it if the motion had been written differently, and … and — well, after their constituents had finally roused themselves again after falling into a stupor listening to this, all they’d remember is that….Dems voted against background checks on AmeriCorps volunteers.

So it’s all political gamesmanship. And there’s a case to be made that, after all, the job of the opposition is to oppose, and if they can find a way to use the rules to delay, obstruct, or embarrass the majority party, then more power to them. It’s up to the majority to suck it up and get their agenda passed anyway. However, there’s a better case to be made that the unending search for clever parliamentary tactics doesn’t need to be allowed to go on without limit. Forcing the majority to vote down popular amendments is an ancient and legitimate political tactic, but the “promptly” gambit is a completely empty scam. Pelosi is on firm ground getting rid of it.