MORE ON PROP 1A….You will be unsurprised to learn that I took a ton of flak in comments yesterday over my opposition to California’s Proposition 1A, a bond measure that would fund a high-speed train between LA and San Francisco. My position was primarily based on a generic opposition to bond measures, but since that isn’t enough for most people, how about if we discuss the project on its merits too? That will give you all a second chance to yell at me.

(I also took some flak for supporting Prop 11, a redistricting initiative, because it might dilute the power of the Democratic Party slightly. Actually, based on how redistricting was done the last time around, I’m not sure it would, and I’m OK with forcing both parties to fight harder for their seats anyway. Still, the issues there are more obvious, so I’ll leave it alone for now.) 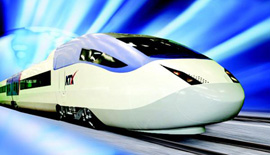 But if we’re going to continue living in the reality-based world, we have to accept that there are both good rail projects and bad ones. And I have some very serious doubts that this is a good one.

In order to be competitive, it relies heavily on a projection that the train will make the LA-SF run in about 2.5 hours. This is almost certainly a fantasy given terrain, trackage, and existing technology. It will probably be closer to 3.5 or even four hours, which would make it almost completely noncompetitive with air travel. It also relies heavily on a projection of 100 million users by 2030. This is fantasy squared. And it further relies on funding assumptions that are practically laughable. Even if Prop 1 is passed, there’s a good chance this train won’t even be built by 2030, let alone carrying 100 million people per year.

There are plenty of promising short-haul rail projects that we should be considering, but long-haul rail is just really problematic. The numbers don’t work out most of the time without heroic assumptions, and the money could almost certainly be better used on other things. So even if California were in good shape fiscally, I doubt very much that Prop 1A would be a good dea.

For more, click the link to read an email on the subject from an extremely dedicated rail proponent. I find it pretty persuasive.

I’d like to suggest you vote “No” on Proposition 1A, the “Safe Reliable High-Speed Passenger Train Bond Act,” on the basis of the following insider, expert information: my dad says it’s a bad idea.

My father, James Mills, spent his entire career in the California state legislature (1961-1983) working to promote public transportation in the state. He was President pro Tem of the Senate for a decade. He was chairman of the Amtrak board under president Carter. Since retiring he has worked as a consultant on transit issues, and in the 1990’s he served on the High Speed Rail Commission for the State of California. My dad is hard-core in favor of rail. If he says a proposal to fund a rail project is no good, then that proposal has to be a real turkey.

1) Prop 1A raises about ten billion dollars in a bond issue. This is a down-payment on a project which was estimated in 2006 to cost 45 billion dollars but will probably cost more if it is ever built. Remaining funding will be sought from the federal government (10-15 billion) and private investors (15-20 billion).

2) The federal government has never invested any amount even close to $10 billlion in a transit project.

3) If private investment were found, the bill says that investors would make money NOT from a the profit of the transit system, but from a percentage of ticket sales. In other words, the profit of investors is guaranteed, regardless of the operating costs of the system. The Legislative Analyst estimates that the OPERATING AND MAINTENANCE COSTS of the system will be one billion per year — the State of California will cover any deficit not covered by ticket sales. It is rare for a public transit system to run in the black: normally, not all costs of the system will be covered from the fare box.

4) Premises on projected ridership are false. The only high-speed rail system in the US is Amtrak’s “Acela” service between NY-Washington and NY-Boston. This system is well established and serves large population centers with excellent public transportation tie-ins to feed it such as subways, and they carry 3 million riders a year. The French have the best high-speed rail system in the world, and their busiest line is Paris to Lyon, again large cities with major subway systems, and it carries perhaps 15 million riders a year. In contrast, proponents of Prop 1A rely on a projection of 100 million riders per year between Los Angeles and San Francisco, a figure provided by a paid consultant that happened to be Lehman Brothers. This projection of patronage is a fantasy.

5) Promises of future extension to Sacramento, Orange County and San Diego are empty in that no concrete plan of any kind is offered other than the unrealistic plan for a Los Angeles-San Francisco line.

Arguments against are signed by Richard Tolmach, President of the California Rail Foundation, of whom my father said “there’s probably nobody in California who is a bigger advocate for rail — or better informed.”