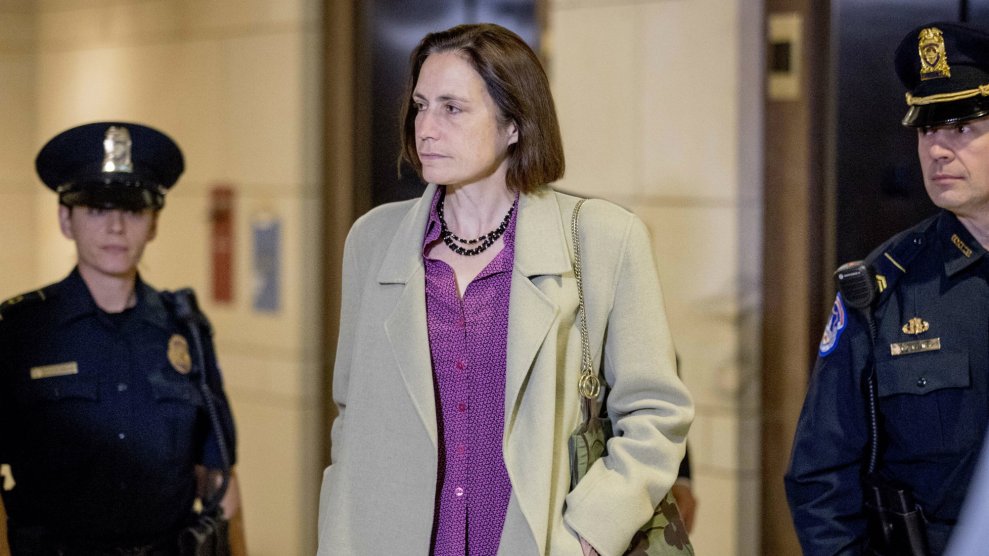 On Friday afternoon, the House committees conducting the impeachment inquiry released the deposition of Fiona Hill, the former top Russia staffer on the White House National Security Council. The transcript is hundreds of pages long and covers many key areas of the Trump-Ukraine scandal.

Our own David Corn has been poring over it and has some instant take-aways. As he notes, Hill’s testimony is significant because it depicts acting White House chief of staff Mick Mulvaney as central to the administration’s efforts to pressure Ukraine to investigate Trump’s domestic political enemies. Hill testified that Rudy Giuliani, who is Trump’s lawyer, was helping Russian disinformation efforts by spreading the debunked (but Trump-favored) conspiracy theory that Ukraine intervened in the 2016 US election. She also told lawmakers that Giuliani and his now-indicted business associates, Lev Parnas and Igor Fruman, mounted a campaign to oust US ambassador to Ukraine Marie Yovanovitch to advance their own business interests—and that she suspected Giuliani might have been involved in criminal activity. And Hill described how she has become the target of conspiracy theories that have led to death threats. More from David:

Fiona Hill in her deposition: Trump's national security adviser, John Bolton, was not told by @realDonaldTrump that Trump had handed key portions of USG's Ukraine policy to @RudyGiuliani. pic.twitter.com/KbyLpOnTdO

Fiona Hill in her deposition: Bolton had no control over @RudyGiuliani's attacks on Amb. Yovanovitch, was pained by that, and called Rudy "a hand grenade." pic.twitter.com/iQLaxU2Jrp

Fiona Hill in her deposition: No one in the NSC or State Dept. was informed that Sondland had been put on the Ukraine beat by @realDonaldTrump. pic.twitter.com/GMCur84037

Fiona Hill deposition: Mick Mulvaney was part of the Giuliani-Sondland effort to hand the Ukrainians a White House meeting with Trump if they would investigate the Bidens. (Hill and Bolton wanted to stop that.) Here she talks about confronting Sondland on this: pic.twitter.com/VJXL7F14Wb

Fiona Hill in her deposition notes that John Bolton saw the Giuliani-Sondland-Mulvaney deal (a White House meeting in return for the investigations) as wrong and improper. Any Republicans want to argue with Bolton? pic.twitter.com/VHFAHcI6bb

Shocker. The TV in Bolton's office was always tuned to Fox. pic.twitter.com/Q0vWCa5UdD

Fiona Hill was concerned that Sondland used his personal cell phone and that his communications were not secure–and could be picked up by the Russians!!! (I know, what about *her* emails?) pic.twitter.com/Y0LabN2E2c

Wow. Fiona Hill schooled the Republicans when they questioned her, noting they (and @RudyGiuliani) were enabling the spread of disinformation that would help the Russians mess with the 2020 election! pic.twitter.com/hctG9kMCJh

Fiona Hill worried that @rudygiuliani — @realDonaldTrump's personal lawyer — was working with low-lifes and might have been committing crimes. pic.twitter.com/SmRutDhVHB

Fiona Hill says that @rudygiuliani and his associates (Parnas and Fruman) pushed to fire Amb. Yovanovitch to advance their business interests and to deflect from the conclusion that Russia attacked the US election in 2016. pic.twitter.com/AsQ03TkwFa

Fiona Hill in her deposition notes that @RudyGiuliani has been helping Russia and Putin by pushing the conspiracy theory Ukraine intervened in the 2016 election. (In previous decades, Rudy might be termed a "useful idiot" for such action.) pic.twitter.com/5unnhZiKD2