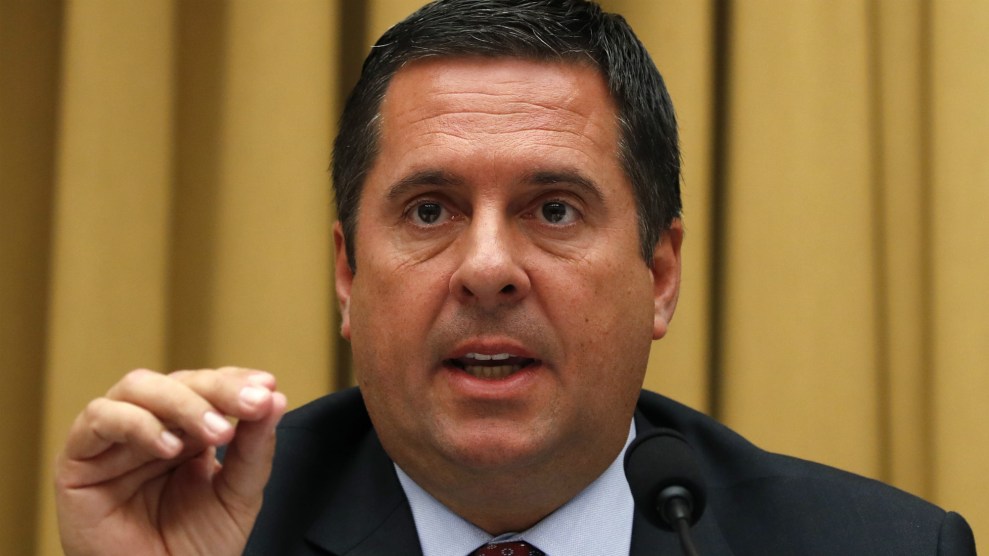 House Republicans released a wish list Saturday morning of witnesses they’d like to see testify when Congress holds its first public hearings on President Donald Trump’s “perfect” call with Ukrainian president Volodymyr Zelensky next week. Not surprisingly, most of them have nothing to do with the impropriety of the call itself.

House Democrats control the impeachment inquiry process but asked for Republican input on potential witnesses last week. Rep. Devin Nunes (R-Calif.), the highest-ranking Republican on the House Intelligence Committee that will be leading the public impeachment inquiry, sent the list to Democratic chairman Adam Schiff (D-Calif.), along with a lengthy letter complaining about the unfairness of the inquiry to Trump. Nunes, who has long been one of Trump’s most ardent defenders, described the process thus far as “opaque and unfair,” writing, “Your actions have great damaged the integrity of the Intelligence Committee and any legitimacy of your ‘impeachment inquiry.”

While House Democrats have said they want to hear from key diplomatic personnel who may have been involved with the quid pro quo arrangement, in which Trump tried to use the threat of withholding American support for the beleaguered nation in its ongoing dispute with Russia in exchange for the Ukrainian president promising to investigate the son of former vice president Joe Biden. After initially objecting to the notion that there was such an arrangement, the GOP has now more or less acknowledged it occurred but insists that it was not improper. Nunes’ proposed witness list seems designed mostly to make the case against Hunter Biden and, of course, Hillary Clinton.

The whistleblower might make an obvious witness, given all he knows about the phone call, but Nunes’ reasoning is in keeping with the general Republican talking points in defending Trump.

Most noteworthy on the list is the anonymous whistleblower whose concern after hearing Trump pressure Zelensky pushed Democrats into pursuing a possible impeachment. The whistleblower might make an obvious witness, given all he knows about the phone call, but Nunes’ reasoning is in keeping with the general Republican talking points in defending Trump. He states the president should be “afforded an opportunity to confront his accusers”—an allusion to the Sixth Amendment, which covers criminal prosecutions and not impeachment inquiries. Nunes also cites the whistleblower’s alleged “bias” against the president, the evidence of which is apparently that he is a registered Democrat (his attorney denies any political bias). Rather than grilling the whistleblower on Trump’s actions, Nunes’ main interest seems to be changing the subject.

Nunes also wants to hear from Alexandra Chalupa, a former employee of the US Embassy in Ukraine, who was also a former Democratic National Committee staffer. Conservative news outlets have pushed the somewhat muddled theory that Chalupa, while working at the embassy, was researching Paul Manafort’s activities in that country in the early 2010s and may have improperly passed that information to Hillary Clinton’s campaign in 2016. Chalupa has denied any wrongdoing, saying she did no opposition research for the DNC. The DNC has also denied any wrongdoing, noting that Democrats were investigating Trump and Manafort’s ties to Russia and Ukraine long before Chalupa was hired.

Without any hint of irony or further explanation, Nunes cited questions about what Chalupa did or didn’t do in 2016 as the reason she was needed to testify about Trump’s July 2019 call with Zelensky.

“Ms. Chalupa is a prime fact witness who can assist Congress and the American Public in better understanding the facts and circumstances surrounding the Ukrainian involvement in the 2016 election,” Nunes wrote in his letter, highlighting a topic that is notably not part of the impeachment inquiry.

Nunes’ list also includes Biden’s son, Hunter, and Devon Archer, a former business partner of the younger Biden. Both sat on the board of Burisma, a Ukrainian natural gas company, that Trump was pushing Zelensky to investigate as corrupt. Nunes wrote in his letter that testimony from the two men would “assist the American public in understanding the nature and extent of Ukraine’s pervasive corruption, information that bears directly on President Trump’s longstanding and deeply-held skepticism of the country.” Biden and Archer would seemingly fit into a strategy of not denying Trump took steps to pressure Zelensky into investigating a political opponent’s family, but rather excusing and contextualizing Trump’s behavior by arguing that the president’s actions were thoroughly justified because of Ukraine’s history of corruption.