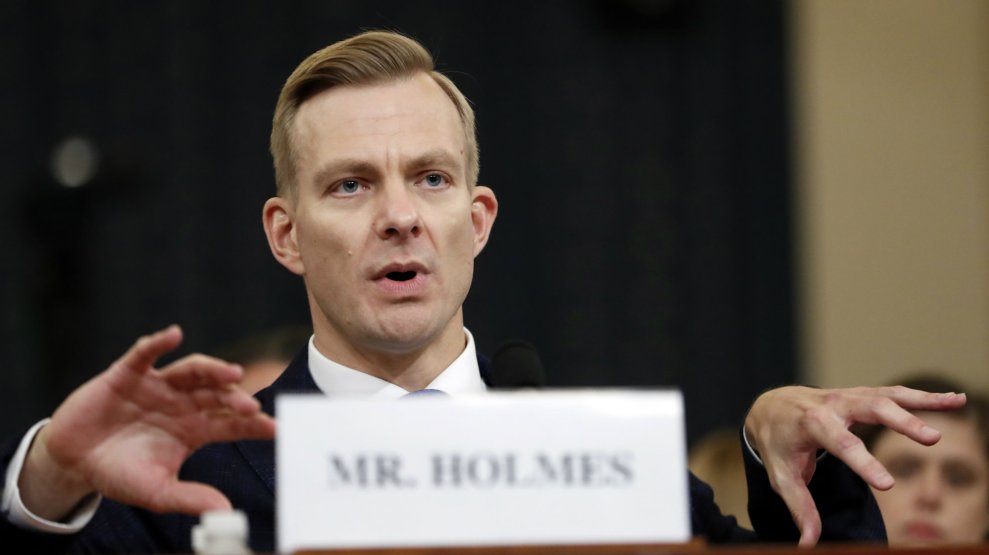 One of the biggest bombshells on the first day of the House Intelligence Committee’s impeachment hearings came from Bill Taylor, the top US diplomat in Ukraine, who testified that a member of his staff overheard a phone call between President Donald Trump and US Ambassador to the EU Gordon Sondland. During the call, Taylor said, the president had asked Sondland about “the investigations,” referring to investigations into Trump’s political enemies that he was pressuring Ukraine to conduct.

David Holmes, the staffer who overheard the call, just described that phone call during Thursday’s hearing. According to Holmes, he heard Trump ask, “So, he’s gonna do the investigation?” Holmes said that Sondland replied that Ukrainian President Volodymyr Zelensky was indeed “gonna do it.”

David Holmes testifies that in a phone call he overheard, Sondland told Trump that Ukrainian President Zelenskiy "loves your a–." "I then heard President Trump ask, so is he going to do the investigation? Amb. Sondland replied that he's gonna do it." https://t.co/gSTHH3SBBD pic.twitter.com/XwZC9nL34P

Holmes described easily overhearing the phone call, which wasn’t on speakerphone, because Trump’s “voice was very loud and recognizable,” so much so that Sondland had to hold the phone away from his ear. Like this:

David Holmes demonstrates how he said Ambassador Sondland "winced" and held the phone away when President Trump was talking loudly on their call, so Holmes was able to overhear their conversation on Ukraine https://t.co/cUEuNWc5zj pic.twitter.com/nfOrHdDhjG

Holmes testified that after the call ended, he asked Sondland “if it was true that the president did not give a expletive about Ukraine,” to which Sondland agreed and said that “the president only cares about ‘big stuff.'” Sondland then explained that “big stuff” meant the investigation Trump wanted into the Bidens and Burisma—not the war Ukraine is fighting with Russia.

"Amb. Sondland stated that the president only cares about big stuff," and later explained, "he meant big stuff that benefits the president like the Biden investigation" https://t.co/Q5w6PVVxew pic.twitter.com/MHXg3r50Q7

Holmes also testified that on the call, Trump and Sondland discussed the situation of A$AP Rocky, the American rapper who at the time was jailed in Sweden:

WATCH: David Holmes, political counselor for the U.S. Embassy in Ukraine, describes Amb. Sondland's efforts to get rapper A$AP Rocky out of a Swedish jail. pic.twitter.com/ZoUfD26beT

Holmes said that when he returned to the US embassy, he “immediately briefed” his supervisor, as well as others, about the call between Sondland and Trump. He said that he “repeatedly referred to the call” in subsequent meetings where Trump’s interest in Ukraine “was potentially relevant.”

Trump, who has repeatedly attacked impeachment witnesses on Twitter, suggested that it would have been impossible for Holmes to overhear his statements:

I have been watching people making phone calls my entire life. My hearing is, and has been, great. Never have I been watching a person making a call, which was not on speakerphone, and been able to hear or understand a conversation. I’ve even tried, but to no avail. Try it live!

Connie Schultz, a journalist married to Sen. Sherrod Brown (D-Ohio), quickly noted that she, too, had once overheard “every word” of Trump’s comments on a phone call:

I sat in the backseat of a moving car on a busy Ohio highway and heard your every word during your call with the guy I knew sitting in the front seat. You were not on speakerphone, @realDonaldTrump. As my mother would say, your voice carries. https://t.co/awZn8fHn3j

Listen to Washington D.C. Bureau Chief David Corn describe the outrageous partisan theatrics in the impeachment room, and the mounting evidence against Donald Trump, in the latest episode of the Mother Jones Podcast: