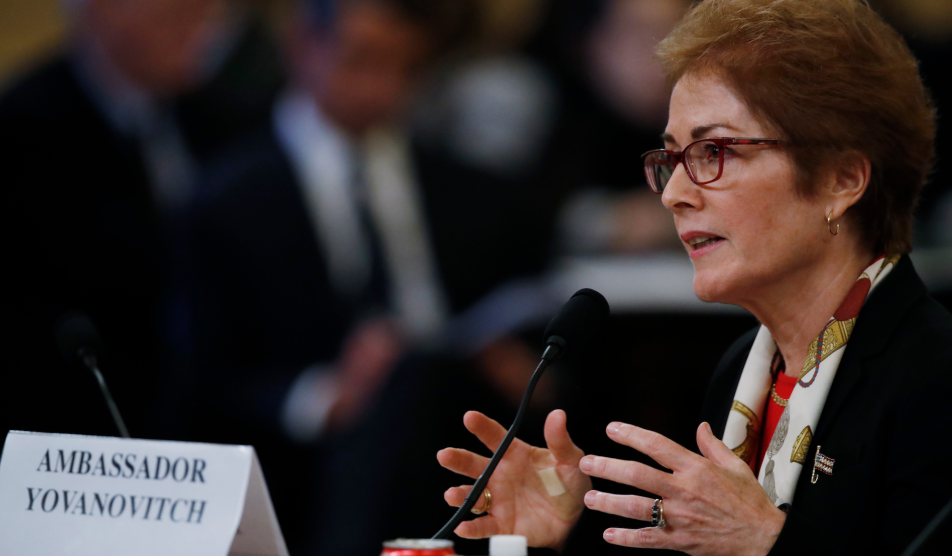 Marie Yovanovitch, the former US ambassador to Ukraine, testified on Friday to feeling threatened after learning that President Donald Trump had told Ukrainian President Volodymyr Zelensky that she would be “going through some things” during a July 25 phone call. But as she detailed her trauma to lawmakers, Trump was on Twitter smearing her again, in a move that both Yovanovitch and House Intelligence Committee chair Adam Schiff slammed as a form of intimidation.

Yovanovitch, testifying in the second day of impeachment hearings this week, said she was “devastated” after reading that Trump had described her as “bad news” on his call with Zelensky. “The color drained from my face,” she said. “I think I even had a physical reaction.”

Yovanovitch’s moving testimony laid bare the emotional and personal consequences of Trump’s efforts to coerce a foreign government into interfering in the 2020 election. But as Yovanovitch spoke, Trump took to Twitter to launch a stunning attack on the former diplomat:

Everywhere Marie Yovanovitch went turned bad. She started off in Somalia, how did that go? Then fast forward to Ukraine, where the new Ukrainian President spoke unfavorably about her in my second phone call with him. It is a U.S. President’s absolute right to appoint ambassadors.

Schiff, a Democrat from California, interrupted the proceedings to inform Yovanovitch that the president was attacking her in real time. “Would you like to respond to the president’s attack that everywhere you went turned bad?” Schiff asked after reading the tweet.

Schiff asks Yovanovitch to respond to Trump's tweet, posted during her hearing, claiming that everywhere she worked "turned bad"

Yovanovitch: "I don't think I have such powers" https://t.co/qNx16IztcL pic.twitter.com/xmAEkTJGpD

“I actually think that where I’ve served over the years, I, and others, have demonstrably made things better, for the US, as well as the countries that I’ve served in,” Yovanovitch said, describing the president’s new attack against her as “very intimidating.”

“Well, I want to let you know, ambassador, that some of us here take witness intimidation very, very seriously,” Schiff said.

The extraordinary moment was even recognized on Fox News, where Bret Baier suggested that it could add another article of impeachment to Democrats’ case against Trump. “This whole hearing turned on a dime when the president tweeted about her in real time,” he said.

Wow. Fox News’ Bret Baier says that Trump’s tweets attacking Yovanovitch could be construed as witness intimidation and hence “adding essentially an article of impeachment in real time as this hearing is going on.” pic.twitter.com/7IiDQ1xriP