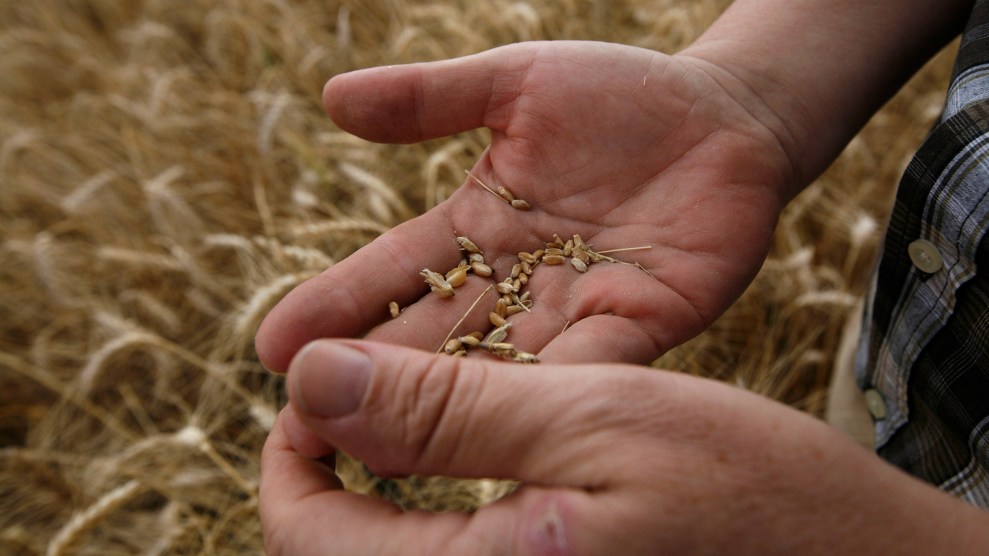 It’s late afternoon, and the farmhands are shaded by wide-brimmed sun hats as they work in an experimental wheat field in northern Mexico, preparing the wheat flowers to be cross-pollinated in a couple of days. For each pollination, both wheat parents have been selected by crop scientists for desirable traits such as fungus resistance, photosynthesis efficiency, and yield.

It’s a quiet scene, but the stakes increase every year as concerns grow that our food system is not ready for the climate crisis.

Scientists at the International Maize and Wheat Improvement Center (CIMMYT) in Sonora are focused on developing wheat varieties which can better cope with drought, rising temperatures and excessive rainfall. In other words, wheat that can thrive under the extreme and unpredictable weather conditions farmers are experiencing globally due to the rapidly warming planet.

“We’re trying to stay ahead of climate change and give farmers everything,” said breeder Leo Crespo as he inspected new varieties planted last winter in meticulously divided micro-plots. Some are lofty and green with open leaves, while others are dry and stumpy.

The diversity is the crucial to breeding resilience and adaptability, which is why scientists are turning to wild and forgotten wheat varieties from across the world to search for those with temperature- and drought-tolerant traits such as deep roots, waxy leaves and stress hormones.

“Breeding is a continuous process. We have to keep the evolutionary wolf from the door.”

But it’s a complicated, never-ending race against time, as global heating drives climate disasters and the emergence of new, adapted or more aggressive pathogens. “Breeding is a continuous process. We have to keep the evolutionary wolf from the door by breeding varieties which are resistant to a wide range of diseases and improve yields even if there’s drought or heatwave,” said Crespo, 39.

Wheat is the most widely consumed grain globally, accounting for a fifth of our carbohydrate and protein intake, and is farmed in every inhabited continent to make bread, chapatis, pasta, couscous, noodles and pastries eaten by billions of people. The wheat we eat today can be traced back to wild grasses domesticated by Neolithic farmers in western Asia and northern Africa, coming to Mexico relatively recently with Spanish settlers.

Wheat does best in temperate climates, but no matter where humans took seeds, wheat adapted to the local ecosystem, evolving over generations as each variety or landrace developed good and bad quirks.

Diversity was the norm, and before the second world war thousands of landraces were being cultivated across the globe, often side by side with other crops—which partially buffered communities from ecological disasters such as disease epidemics and extreme weather. But yields were often low as many wheats were tall and gangly, and would be harvested too early or else tumble in windy conditions.

Global wheat production tripled after the Green Revolution in the mid-20th century after Norman Borlaug, an American plant pathologist deployed to Mexico by the Rockefeller Foundation, used a semi-dwarf gene from a Japanese wheat to create shorter stem varieties which when farmed with fertilizer and water improved yields beyond anyone’s dreams.

This was the birth of extractive industrial agriculture and Borlaug’s discoveries in Mexico changed the way the world farmed wheat, rice and many other crops.

Uniformity, standardization, and fossil fuel-driven technologies became the gold standard and Borlaug was awarded the Nobel peace prize as malnutrition declined. But the loss of diversity in crops, ecosystems and traditional sustainable practices came at a huge environmental and human cost. And now the climate crisis is making us pay.

“After the Green Revolution the focus was on breeding high-yield disease-resistant specialists for different regions, but the mega-varieties were not bred to cope with unpredictable climate conditions. Now we need generalists, and there’s enough diversity to cope with unpredictable climate events—we just need to find and exploit it, but funding is an issue,” said Matthew Reynolds, head of physiology at CIMMYT’s wheat program (which Borlaug led until his retirement in 1979).

CIMMYT is an international research organization that develops new maize and wheat varieties as “international public goods” for national food programs and the private sector. Its funding comes mostly from government development agencies and foundations like Bill and Melinda Gates and the Carlos Slim Health Institute, but with some direct and indirect private sector money—and influence.

The end goal is to create varieties that can adapt to and thrive in unpredictable conditions without expensive and ecologically damaging fungicides that commercial seeds are designed to require.

It’s a painstaking, never-ending process. Every year 5,000 newly bred lines or varieties are tested between November and April, in four different environments: severe and intermediate drought, late season heat and optimal conditions. Simultaneously they are tested in Kenya for stem rust, a fungal disease and serious threat to wheat.

At the end of the season, some of the best-performing wheats are selected as parents for the next generation of crosses, while others are taken to Toluca to evaluate their susceptibility to other diseases. (Zinc and protein composition—which determines the grains’ end use—is also measured.)

In the end, about 1,000 make it through to the second year, when two further test conditions are added, and so it goes on until year five, when the best performers are sent to 100 or so countries to grow and test in their nurseries. This is critical, as wheat is grown on about 544 million acres worldwide, from hot and humid conditions in Bangladesh to the arid heat of Nigeria and the chilly mountains of Turkey.

“No one is getting rich selling drought-resistant wheat seeds in Africa, so we need public programs to develop diverse seeds.”

After six years, the program ends up with 50 or so new wheat varieties which countries can take and test before releasing to their farmers. The goal is to shorten the breeding cycle to four years to help farmers with few resources better cope with the rapidly changing climate and emerging disease threats.

“The private and public sectors are not in this together. No one is getting rich selling drought-resistant wheat seeds in Africa, so we need public programs to develop diverse seeds and reach small farmers who are not served by commercial seed companies,” said Luigi Guarino, director of science at the Crop Trust.

About 70 percent of the world’s wheat can be traced back to seeds developed here, yet just four transnational agrochemical companies control 60 percent of the global seed market. The big four focus on yield, and produce most of the world’s fungicides and pesticides, which degrade the environment and reduce biodiversity, making farms more vulnerable to climate change shocks.

It’s unclear how many wheat varieties with useful climate- and disease-resistant traits have been lost as a result of the industrialization of our food system, but there are about 800,000 unique wheat seeds stored in gene banks globally, of which nearly a quarter are at CIMMYT. The collection includes wild grassy ancestors, landraces and obsolete varieties that developed disease susceptibility but may contain useful traits such as deep roots, which are good at finding water during drought, or the ability to delay stress-related premature aging, which affects photosynthesis.

About a third of the CIMMYT seed collection has undergone genetic fingerprinting, which allows physiologists to identify which previously unknown diversity might be helpful. Once tested in the fields, promising varieties end up in the breeding pipeline, with some eventually fast-tracked to be tested across the world as part of a bigger climate change project.

But in order to breed new seeds that can adapt to the rapidly heating planet, scientists must figure out what’s happening at night—an under-researched area until now.

A 2007 study found that for every 1C increase in night-time temperature there is a staggering 6 percent drop in wheat yields—a steeper decline than hotter days. The climate crisis is triggering record-breaking day temperatures, but night temperatures are increasing significantly faster.

This is potentially catastrophic and “makes understanding plant night-time responses to temperature so important to researchers, breeders and farmers,” said Lorna McAusland, a wheat physiologist at the University of Nottingham collaborating with CIMMYT.

In one field, heaters are installed over micro-plots growing eight popular or elite varieties in order to better understand how higher nocturnal temperatures reduce yield.

Drones take thermal images which help scientists on the ground measure things like canopy temperature and water loss or transpiration—the plant’s internal air conditioning system. It’s long been thought that plants rest at night, conserving water for photosynthesis and to transport nutrients. If the air conditioning is overworking at night in order to keep cool, the plant could run out of water, get dehydrated and stop growing or die.

Initial results found that some varieties lost more water than others, so now researchers must tease out the genetics to help breeders improve nighttime heat tolerance in future seeds. The aim is to outpace human-made global heating and breed climate-resilient varieties so yields do not collapse, as worst-case scenarios predict. “Researching night-time temperatures is the new frontier,” said Reynolds.

Agroecologists, regenerative farmers and others would say that diversity in farmers’ fields—plots with different crops and diverse varieties—is crucial to build climate resilience and minimize the ecological footprint of agriculture.

Still, the diversity in these experimental plots is striking, given the uniformity of commercial wheat fields. Crespo said: “Diversity is essential in breeding but not all diversity is good, and that’s the challenge.”