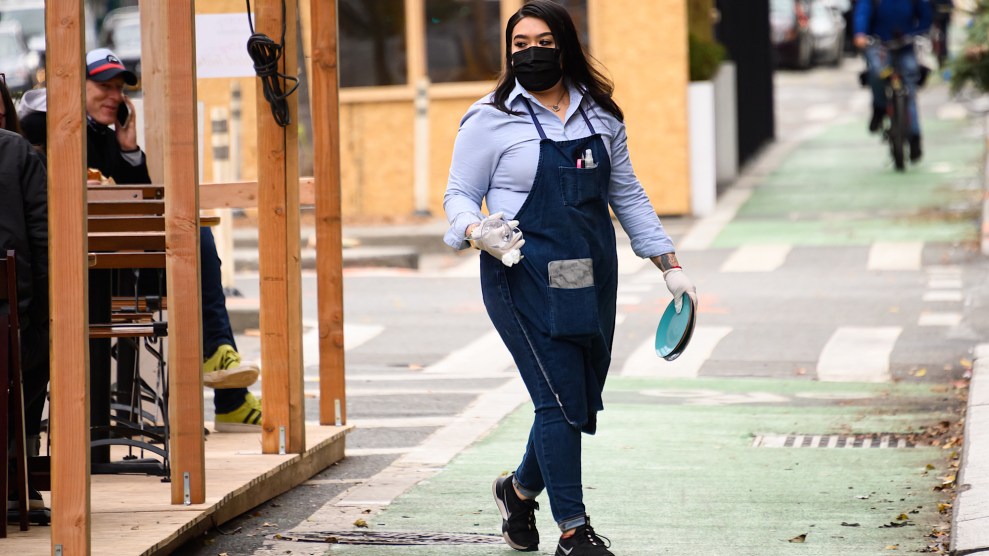 As the restaurant industry struggles to fill jobs cut early in the pandemic, some media outlets and politicians, like Rep. David Rouzer (R-NC), are pinning the labor shortage on unemployment benefits. People are lazy, their thinking goes; government assistance turns people into welfare queens who don’t return to work because they’ve grown dependent on handouts. Others are pointing out that wages must be pretty low in order for someone to consider living on unemployment instead. The debate has even become a Twitter meme: A recent post by political commentator and Twitch streamer Hasan Piker had replies ranging from a Yu-Gi-Oh! image to the bike fall meme.

“We’re not short on workers, we’re short on good jobs.”

In reality, according to a new report by nonprofit restaurant advocacy group One Fair Wage, most restaurant workers had trouble even accessing unemployment insurance: “they either could not access these benefits or earned much less than they should have and than they needed due to the subminimum wage for tipped workers and complications with their tips not being recognized as income.” Even if they did access the benefits, a study by Yale researchers done earlier in the pandemic found “no evidence that more generous benefits disincentivized work either at the onset of the expansion or as firms looked to return to business over time.”

The reason servers and cooks and dishwashers are leaving restaurants en masse, the One Fair Wage report It’s a Wage Shortage, Not a Worker Shortage found, isn’t because they’re being paid to sit on the couch: It’s because restaurant jobs by and large offer dismal wages and terrible working conditions, especially for women.

In online and phone surveys conducted from last fall to this month, more than half of restaurant workers said they are strongly considering leaving the industry, with 76 percent saying the reason for that decision is low wages, One Fair Wage researchers found. Other workers cited concerns about COVID-19 safety, desire to transition to a different industry, and concerns over hostility and harassment from customers, and also from coworkers or management. The report also addresses how mothers have faced significant obstacles during the pandemic; 91 percent of mothers reported decreased tips during that time.

On a call with One Fair Wage on May 5, Jillian Melton, who’d worked at a restaurant for seven years up until last year, talked about her experience in earning the tipped minimum wage (which restaurant workers earn in many states) in Tennessee. As a mother of five, she said she can’t afford to hope she makes enough in tips during a shift only to earn less than expected. “We’re not short on workers, we’re short on good jobs,” she said.

Carisa Shade, a former bartender and mother of four who lost her job early in the pandemic, shared a similar perspective. “It’s not just emotional or physical or germs,” Shade says, “it’s the toll of all the complexities that are put together.” While she hasn’t made plans to return to bartending, she has talked to her husband, a chef, about starting their own restaurant. She said their decades of experience would allow them to recruit the best workers and offer better treatment.

“We can provide them with all the things that other companies fail to realize,” Shade said. “Like, you’re a person, you have to eat, you need to go to the bathroom, you need to take off because you’re having a baby.”

Rep. Judy Chu (D-Calif.) also spoke on the call, saying the “She-cession,” a term that emphasizes how the economic downturn negatively affected women, has been felt especially hard by restaurant workers. Chu is a cosponsor for the Raise the Wage Act, a House-sponsored bill that would phase out the tipped minimum wage (a racist practice born after slavery) and incrementally increase the minimum wage until it reaches $15 an hour. The bill has the potential to chip away at the pay gap that disproportionately affects women of color in the restaurant industry.

“Because of the pandemic, these are some of the riskiest jobs in the nation,” Chu said. “No one should have to risk their life for a job that doesn’t pay the bills.”