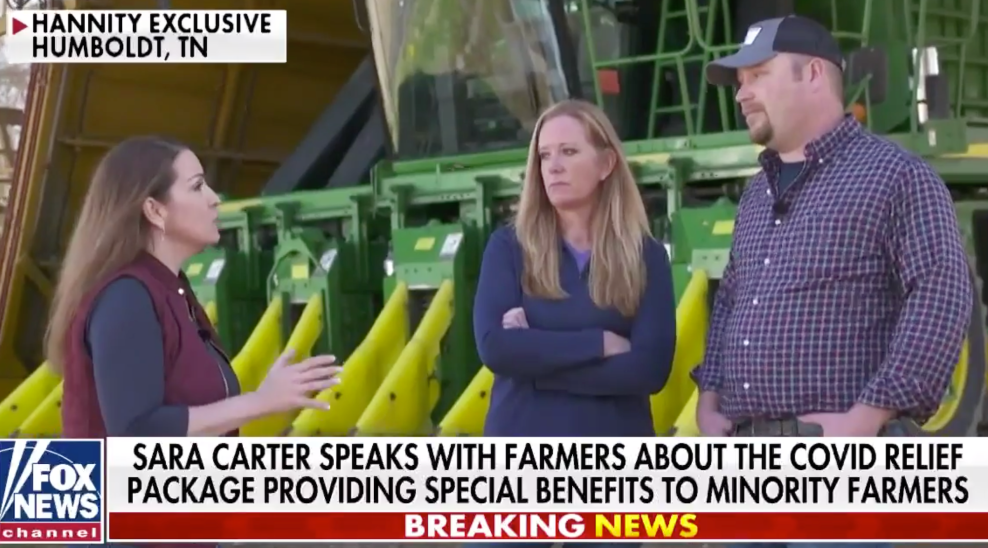 Airing their grievances: White farmers dish to Fox News about being excluded from government support.Fox News/screenshot

“What happened to equal protection under the law?” US Rep. Sam Graves (R-Mo.) fumed on Facebook. “This is wrong and un-American. I’m sure there are a lot of Americans out there that would love to have our tax dollars pay off all their debts. This is targeted to a very select few.”

“Just because you’re a certain color you don’t have to pay back money? I don’t care if you’re purple, black, yellow, white, gray, if you borrow money you have to pay it back,” Tennessee farmer Kelly Griggs told Fox News last week. She also lamented the hit to taxpayers such as herself: “I’m going to have to pay for that.”

Griggs later doubled down on her grievances in an interview for Sean Hannity’s Fox News TV show along with her husband Matt, presenting herself as part of a group of “forgotten” farmers who won’t benefit from the bill’s provisions, which are directed at socially disadvantaged growers. Matt Griggs expressed concern that the bill might generate interracial tension: “I think this bill could not only divide—promote division in the farming community, [but also] just in people in general.”

Okay, now for a bit of context. For decades, the US Department of Agriculture systematically denied Black farmers access to the loans and other aid lavished on their white peers, contributing to foreclosures and millions of acres of lost land for tens of thousands of farm families. According to the Land Loss and Reparations Project—a team consisting of Texas A&M’s Thomas Mitchell; University of Massachusetts, Boston, economist Dania V. Francis; the New School’s Darrick Hamilton; Harvard’s Nathan Rosenberg; and journalist Bryce Stucki—the USDA’s historical injustice helped trigger a loss of Black wealth worth at least $300 billion, contributing to a massive and persistent racial wealth gap.

Latino, Asian American, and Native American farmers have faced similar hurdles—to speak nothing of the ongoing exploitation of migrant farmworkers from Mexico and Central America, or the fact that our entire nation is built on stolen land and labor.

As for those “forgotten” farmers highlighted by Fox News, well, in 2020, while the presidential election heated up, the federal government basically parachuted cash into farm country. Agricultural subsidies reached an all-time annual record of $46.2 billion that year, after hovering at around $11 billion during pre-Trump years. The extra payments originated mainly from two sources: a program ginned up by former President Donald Trump in 2018, without Congressional input, seeking to shield “our Great Patriot Farmers” from the fallout of his trade war; and from Congressionally mandated COVID-relief acts passed last year.

The two sources had one thing in common: Upwards of 97 percent of each went to white farmers. The great bulk of conventional farm subsidies also flow to that group.

While eye-popping at first glance, the white-dominated nature of of federal agriculture support is hardly a surprise. Farm-subsidy demographics largely track farm ownership demographics—and white people own nearly all of the country’s farmland. And they do so largely because of overt and covert racism within the USDA.

As for the farmers now complaining about the aid earmarked for farmers of color in the COVID-relief bill? Many of them benefit quite nicely from the status quo. Rep. Graves—the one who denounced supporting farmers of color as “wrong and un-American”—represents a district in Missouri that received nearly $5 billion in farm subsidies between 1995 and 2020. His own family farm took in $661,153 over that same period, including $57,089 in 2019 alone. From his perch in the US House, he vigorously supports the subsidy system. Matt and Kelly Griggs—the ones fretting to Fox News about fairness and divisiveness—have had similar success with federal payments. Their operation took in $693,653 from 1995 through 2020, nearly half of it since 2017.

How bold of them to complain so loudly about debt relief for farmers of color.