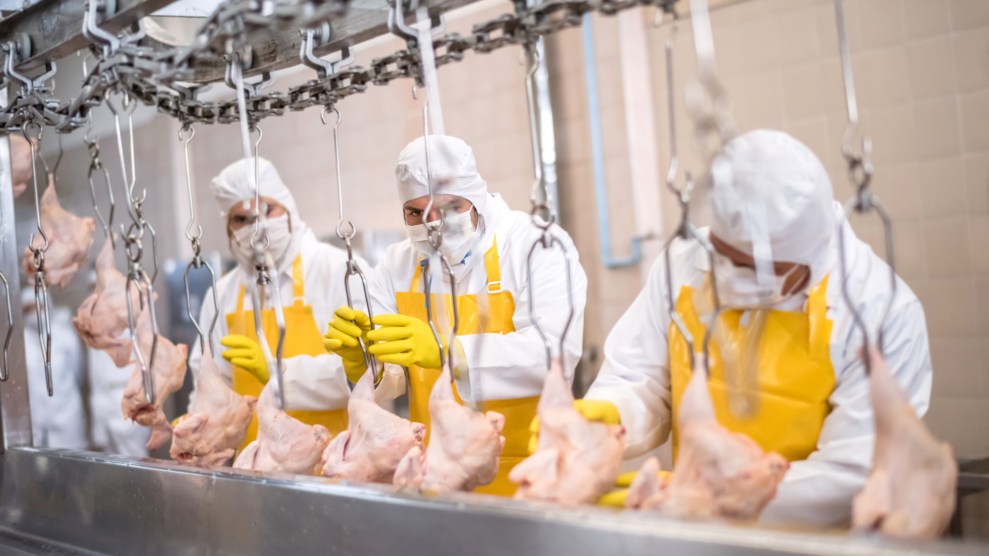 Update (9/3/2020): Perdue Farms, the fourth-largest US chicken company, “never has, and does not currently plan to run our lines faster than the 140 birds per minute rate that has been standard for years,” Andrea Staub, a company spokesperson, wrote in an email in response to this article.

Outside of the healthcare industry, few workforces have been hit as hard by the coronavirus pandemic as the people who work in meatpacking plants. According to the heroic data journalism of the Food and Agriculture Reporting Network’s Leah Douglas, more than 40,000 meatpacking workers have been infected with the virus, and 200 have died. At the same time, the Trump Administration is pushing for a policy change that will put thousands of the industry’s workers under yet more pressure—by allowing chicken companies to speed up their slaughter lines by 25 percent.

Right now, poultry workers in most plants dismember and trim chickens as they head down the disassembly line at a rate of 140 birds per minute. At this pace, they already experience alarmingly high rates of repetitive stress injuries like carpal tunnel. The blistering pace of kill lines has been a major driver of the industry’s COVID-19 catastrophe, because workers have to bunch together shoulder-to-shoulder to handle the load, making social distancing very hard, if not impossible. Trump’s Department of Labor, headed by former management-side labor lawyer Eugene Scalia, has declined to issue strict social distancing rules on meatpacking plants during the COVID crisis, instead settling on voluntary guidelines suggesting that plants tweak the alignment of workstations “if feasible,” and “consider” making signs to urge workers to physically distance. (Here’s my recent piece on the career of Scalia, who is the son of the late Supreme Court justice, and its dire impact on the well-being of meatpacking workers.)

But rather than encourage companies to slow down the pace of the lines during these already dangerous times, Trump’s proposed rule would allow the poultry industry to ramp up kill lines from a maximum of 140 birds per minutes to 175 birds per minute. For the industry—dominated by Tyson, Pilgrim’s Pride, Perdue, Sanderson Farms—a faster line means lower cost and thus more profit.  Back in 2012, the Obama US Department of Agriculture estimated that raising the speed limit to 175 birds per minute would lower costs by 3 cents per bird, resulting in an annual boost to the industry’s bottom line worth “at least” $258.9 million.

The industry’s quest for faster lines started well before Trump. Under Obama, the USDA essentially privatized the way the agency inspects poultry slaughter, shifting much of the task of ensuring food safety in these facilities to the companies themselves. As part of that push, the USDA initially intended to allow the speed up to 175 birds per minutes, but ultimately backed off under pressure from immigration, labor, and workplace-safety advocates.

Upon the election of Trump, the chicken industry ramped up efforts to raise the limit. In September 2017, the National Chicken Council petitioned the USDA to allow plants to operate without “arbitrary line speed limitations,” demanding an industry-wide bump to 175 birds per minutes. There is no plan, of course, to raise worker wages to compensate for this speedup.

The agency responded in piecemeal fashion, by inviting companies to apply for “waivers” that allowed individual plants to speed up. In April 2020—just as COVID was ripping through meatpacking plants—15 large poultry plants requested and received approval from USDA to increase their line speeds. An analysis of public data from the worker advocacy group the National Employment Law Project revealed that eight of the plants had COVID outbreaks, with one of them “closing shortly after the USDA decision due to the rampant spread” of the infection.

The USDA’s proposed rule—released in the spring but first reported by Civil Eats’ Lisa Held on Aug. 31—would allow the entire industry to follow suit. The agency has yet to invite comments or release a timetable for its implementation. If the proposal becomes law, it will represent yet another victory in the chicken industry’s long quest for ever-faster lines. As recently as 1979, the speed limit stood at 70 birds per minute, reports the anti-poverty group Oxfam. For the workers who provide our country chicken—largely women of color, around a third of them immigrants, making a mean hourly wage of $12.71—it’s another kick in the teeth.

Meanwhile, the United Food and Commercial Workers International Union, which represents thousands of meatpacking workers, and and Public Citizen have filed a lawsuit to reverse the recent line-speed waivers issued by Trump’s USDA; and Sen. Cory Booker (D-N.J.) and US Rep. Marcia Fudge (D-Ohio) have introduced “The Safe Line Speeds in COVID-19 Act,” which would do the same thing.