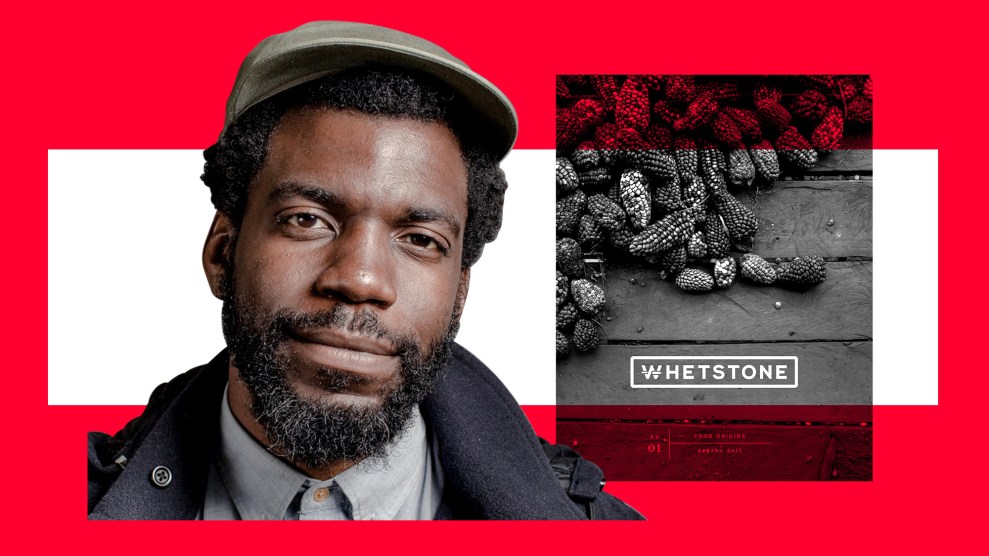 Food media is almost entirely owned and managed by white people. So it’s no surprise—in this summer of racial reckoning—that the institutions that churn out glossy culinary magazines, viral cooking videos, and scholarly food-culture content have come under scrutiny over who has the power to shape the way we think about what we eat. In early June, Adam Rapoport, editor of Condé Nast’s Bon Appetit magazine, resigned amid reports by staffers of racial stereotyping and pay disparities.

During a panel in June featuring Nigerian-born chef Tunde Wey and John T. Edge, head of the Southern Foodways Alliance, Wey offered some suggestions about how food media can harness the summer’s momentum and create real transformation:

I’m talking about the company that owns Condé Nast investing say $10 million in a startup that is owned by a Black man, a food startup by Stephen Satterfield. Take money, take $10 million, and invest it in this Black man’s company. That’s what I’m talking about.

Satterfield is the publisher and founder of Whetstone Media, which produces the food-culture print magazine Whetstone and the podcast Point of Origin. Whetstone digs into the stories of the people and ecosystems behind the food and beverages we consume. This vision, Satterfield explained in our latest episode of Bite, grew out of a career spent working at restaurants focused on sourcing quality ingredients—first the pioneering Portland farm-to-table temple Genoa; and later at the excellent San Francisco restaurant Nopa. In other words, Satterfield moved into food media from a place of deep knowledge of food and wine.

Edge’s response to Wey’s suggestion that Satterfield deserved big-money investment from a media giant caused a stir. “Would you say that backing Whetstone is a good business decision?” Edge asked Wey.

Satterfield has struggled for years to find investors for his magazine, which is currently the nation’s only Black-owned print food magazine (soon to be joined by Klancy Miller’s For the Culture, which is seeking startup funding). Edge’s remark reminded Satterfield of the “dismissive response that white men have given me and [Whetstone] since it started,” he told me.

The idea for Whetstone germinated while Satterfield was working at Nopa. As he began to get to know the farmers who supplied the restaurant, he realized that something was getting lost in the farm-to-table fervor engulfing the Bay Area’s food scene. “A lot of the servers in restaurants, including our own, knew to name check the farms, but they couldn’t really tell you about the people,” he said. “It was a significant disconnect.” So it became part of his job to organize farm visits for Nopa staff, which eventually morphed into an in-house multi-media project he led called Nopalize.

Eventually, he wanted to take his storytelling beyond just farmers in and around the Bay Area. Nopa’s owners pitched in $5,000 to help Satterfield develop the idea into an independent venture called Whetstone. But launching a print magazine with a staff requires significant startup capital, and Satterfield’s efforts to raise funds for the project hit a roadblock.

After dozens of conversations with potential investors, mostly white men, proved fruitless, Satterfield realized that the magazine would have to rely on that guerrilla financing resource par excellence: the personal credit card. When Satterfield recounts his struggle getting Whetstone off the ground, he sounds like an indie filmmaker with a singular vision pitching clueless Hollywood execs before going full DIY. Whetstone Media, launched in 2017, remains a shoestring operation, but it’s going strong, true to Satterfield’s vision. It’s a go-to source for videos on the world’s oldest continuously producing grape vines, in the Republic of Georgia; dispatches from the culinary frontier in Scandinavia; deep dives into the history and future of Black farming in America; and explications of the natural–wine phenomenon that cut through the marketing hype, a topic particularly dear to Satterfield’s (and my) heart.

Part of what stung so badly about Edge’s comments, Satterfield explained, is that the two men have had a friendly relationship since the mid-2000s. Edge helms the Southern Foodways Alliance, a kind of culinary think-tank housed at the University of Mississippi that covers the history and culture of southern food.

“John. T. knows the sacrifices that I’ve made to start this company,” Satterfield said. “This is someone who I thought of as an advocate for me and my career in the industry.”

After he watched Edge question his startup during the James Beard Foundation panel, Satterfield posted a powerful letter on Twitter on June 29 joining the calls for Edge to step down from his post and make way for Black leadership of a group that focuses on a region whose food culture owes so much to Black people. Satterfield’s Twitter confrontation helped push a long-simmering debate about the Southern Foodways Alliance’s white leadership into the public sphere, leading to a big New York Times article and an open letter from former members and other associates calling for “a transformative shift of power and culture within the SFA.”

I reached out to Edge for his response. He said his words during the conversation with Wey were misinterpreted: “The rhetorical question I asked about Whetstone was my attempt to set up a positive conversation about the business model and the cultural value Stephen has built,” Edge wrote in an email. “Unfortunately, the conversation moved quickly away from the positive point I aimed to make: Major media companies should invest in Whetstone.”

The episode left Satterfield more convinced than ever that his vision of media ownership—not just representation—is worth fighting for, despite the dearth of investment. “It is essential that Black people own their own media, because when we don’t own our own media, we will not own our own messages,” he said. “And that is catastrophic, not just for Black people, but for all marginalized communities.”