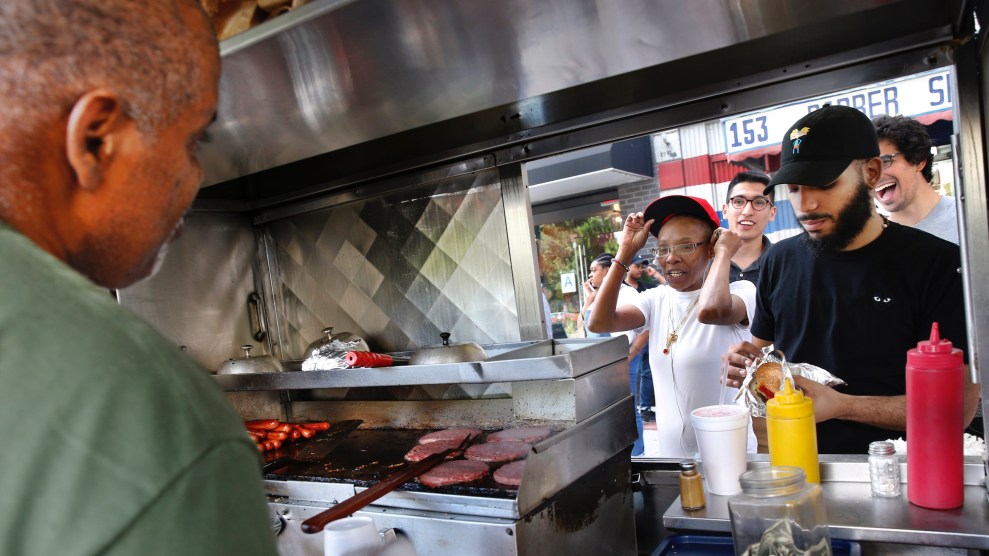 Many of the people protesting racial injustice across the country now have a common demand: “Defund the police.” What does that mean in practice? One model is to move some of the powers currently bestowed upon heavily armed, often hostile cops and hand them to city employees trained in peaceful problem-solving.

A recent decision by New York City Mayor Bill de Blasio hints at how this could work. The mayor announced on June 7 that the city’s police department would no longer oversee enforcement of regulations involving street vendors. The move was part of the administration’s “de-escalation agenda by reducing interactions between uniform officers and New Yorkers, particularly immigrant communities and communities of color,” the press release stated. As Eater reports, “even after the start of the pandemic, the NYPD was still issuing tickets to vendors despite the massive downturn in business.”

According to the New York City-based Street Vendor Project, which is part of the nonprofit advocacy organization the Urban Justice Center, most of the city’s 20,000 vendors are immigrants and people of color—the very groups most vulnerable to racist policing. City cops have issued an average of 18,000 tickets to vendors annually over the past three years, the group estimates, and vendors sometimes receive exorbitant tickets for minor violations (like selling food too close to a crosswalk). In addition to the fines, such “quality-of-life” policing creates ample opportunity for potentially deadly interactions between cops and people trying to scratch out a living on public sidewalks and in many cases deliver affordable food to low-income communities.

Even as they face hostility, these micro-enterprises form an important strand in the fabric of working-class city life. In a 2019 study for the nonprofit Women in Informal Employment: Globalizing and Organizing, researchers looked at Flushing, Queens, a heavily immigrant but fast-gentrifying neighborhood that banned vending from its sidewalks in 2018, destroying a celebrated food scene. A survey of neighborhood residents found that 56 percent wanted the vendors to stay, and that among people who identified as vendor customers, support rose to 70 percent. “In general, people with lower incomes had more favorable views about vendors, while higher-income people were more likely to perceive vendors as a problem and more likely to be in favor of the vendor ban,” they found.

Similar issues exist in another city with a strong street-vendor tradition and a history of aggressive, often-racist policing. Back in 2018, Los Angeles legalized street vending, but didn’t fully pull the cops off the beat. “There’s definitely tension,” between the Los Angeles Police Department and street vendors, said Lyric Kelkar, senior associate at Inclusive Actions, a community organization focused on strengthening local economies. “There is over-harassment and we are always against LAPD being the enforcer of street vending.”

LA boasts around 50,000 vendors, at least 10,000 of whom sell food, Kelkar said. Like in New York City, most of the street vendors are women, immigrants, undocumented, or elderly. While the city’s Bureau of Street Services (StreetsLA) is technically the enforcer of street vending rules, Kelkar said LAPD officers still frequently make contact with street vendors and are still allowed to issue citations.

Plus, food street vendors are put in a particularly tough position, Kelkar said, because the LA County Department of Public Health can also call on LAPD to enforce health code violations, which could end up as misdemeanors. For undocumented food vendors, that charge could lead them to a path to deportation.

Taking the cops off the vendor beat doesn’t amount to the deregulation of street vending. In a statement just after the De Blasio announcement, Street Vendor Project noted that with NYPD out of the picture, six city departments—health, sanitation, consumer affairs, fire, parks, transportation—still “have the ability to regulate street vending.”

Street Vendor Project Responds to @NYCMayor Announcing #NYPD out of Street Vendor Enforcement. This is a big step forward – but we must go further to #DefundNYPD & #LifttheCaps pic.twitter.com/670XoSKS4k

The group wants a more explicit defund-the-police policy from the city, Carina Kaufman-Gutierrez,  SVP’s deputy director, said. “We call for a minimum $1 billion cut to the NYPD budget immediately, and an equal investment in education, jobs, housing, healthcare, and the basic needs of healthy communities, centering undocumented New Yorkers who have been left out of all relief efforts, as well as immigrant-run small businesses,” she stated, adding: “Not a single street vendor in our network was the recipient of either city or federal-level small-business grants or loans.” The group supports a pending New York City Council proposal that would consolidate vendor regulation into the hands of a single single Street Vendor Enforcement Office, overseen by a board that includes vendors.

Turns out, there’s already a model in place for regulating businesses that sell cooked food to the public without the involvement of armed agents of the state: It’s called restaurant inspection.