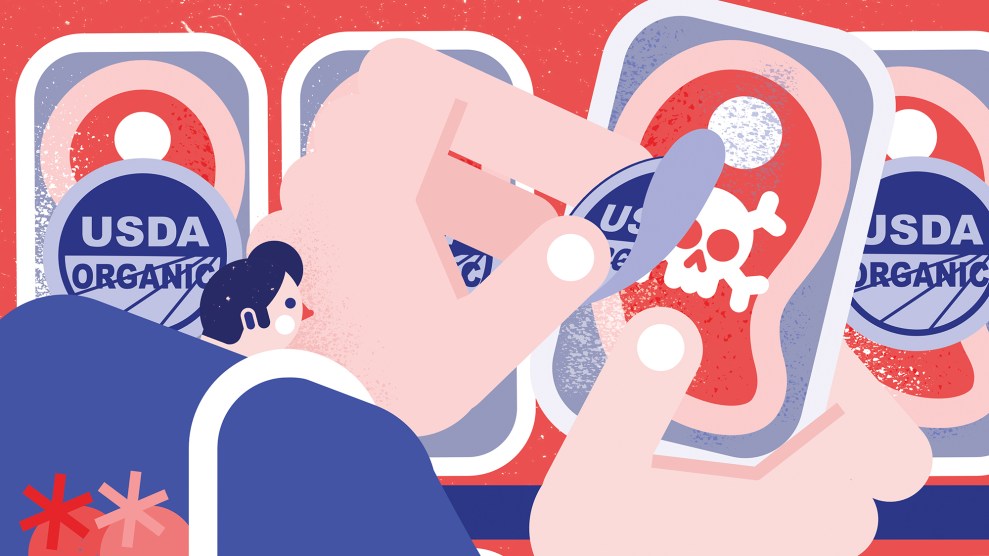 If you’ve ever bought organic meat, you’ve noticed the hefty price tag: An organic chicken can cost more than twice a conventional one. For some shoppers, that upcharge is worth it—the circular green and white “USDA Organic” label guarantees that the meat comes from an animal raised on feed that’s grown without pesticides or chemical fertilizers.

Or does it? Organic meat producers operate on impossibly tight margins, so many buy less expensive imported grain to feed their animals—and that’s where things get murky. Lax federal control means that exporters can hire organic certifiers that will help them boost profits by looking the other way. The result is an influx of cheap, fraudulent products that are driving down prices and hurting American organic farmers who play by the rules.

In an industry where organic labels can increase the value of a ship’s cargo by millions of dollars, the incentives for cutting corners are strong. Take Tiryaki, a billion-dollar Turkish exporter that handled 85 percent of the foreign organic grain that entered the United States in the first half of 2018. Early that year, the USDA caught a Tiryaki subsidiary attempting to import grain that allegedly “violated organic regulations.” That shipment was certified organic by Ecocert, a European certifier that had been forced to address red flags in previous audits, like using an agent without “sufficient expertise in organic production or handling techniques.”

The USDA didn’t penalize Tiryaki, and settled with Ecocert after it took corrective measures and paid a mere $5,000 fine. The following year, shipping records show, more than 153,000 tons of supposedly organic grain from Tiryaki showed up in US markets—double the previous year.

That kind of increase is cause for alarm, says John Bobbe, former executive director of OFARM, a co-op representing growers. “You don’t have organic production come up that fast.” Such big influxes hurt domestic producers who are subject to tighter regulations. From 2015 to 2017, the high volume of imports slashed organic corn prices from $13 to $8.20 a bushel. Organic soybean prices plunged from $26 to $17 a bushel, causing American organic grain farmers to lose more than $400 million in sales. Bob Stuczynski, a farmer in Amherst, Wisconsin, fears his family will lose their land if this trend continues. “The next generation won’t have a chance to farm,” he says of his three kids.

We import 70 percent of our organic soybeans and 40 percent of our organic corn, which are fed to organic livestock. The Cornucopia Institute, an industry watchdog group, suspects that the USDA, which is supposed to regulate but also promote US agriculture, is not strictly monitoring these imports—because if it did, it could undercut the entire organic food chain. “If the feed isn’t authentically organic, neither is the livestock, and neither is the meat on the table,” Anne Ross, a farm policy analyst with Cornucopia, writes in an email.

Other countries have cracked down on dodgy certification. The European Union requires pesticide testing on products from countries where organic fraud is rampant. Several third-party certifiers have lost their licenses in Europe and Canada for slapping organic labels on pesticide-laden food. Last March, Control Union, a massive certification business that works in more than 70 countries, lost its European license to approve organic products from Kazakhstan, Moldova, Russia, Turkey, and the United Arab Emirates.

But American officials are taking a less stringent approach. They still do not require rigorous pesticide tests for organic imports from high-risk countries. Although the USDA suspended Control Union’s license to certify products from Turkey, the department still allows the company to accredit organic operations in Russia, Ukraine, and Bulgaria. Cargo ships continue to haul supposedly organic grain from the Black Sea into American ports, and in larger quantities than before.

Dave Chapman, executive director of a watchdog group called the Real Organic Project, worries that if word gets out about these fraudulent practices, consumers may soon stop trusting the word “organic” entirely. “A great deal of the organic label is trustworthy, and a great deal isn’t,” he says. “It’s going to kill organic if we don’t reclaim it.”