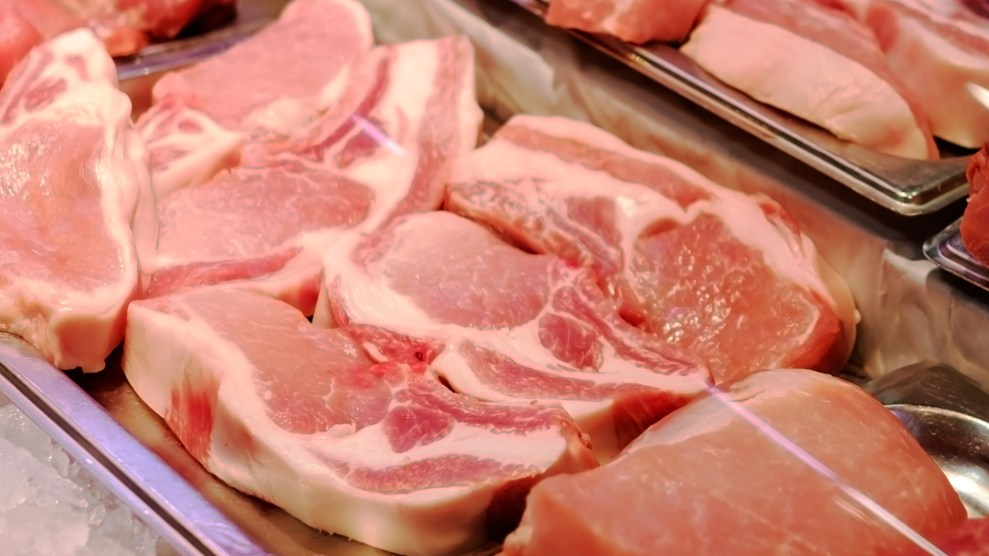 Back in March, the coronavirus started triggering infection hotspots in and around meatpacking plants, sickening and killing workers. As local public health authorities pushed giant meat conglomerates to close infected facilities, industry executives warned that doing so was “pushing our country perilously close to the edge in terms of our meat supply,” as Kenneth M. Sullivan, CEO of Smithfield, the world’s largest pork producer, declared in a April 12 press release.

Two weeks later, after similar laments from an executive at rival meat conglomerate Tyson, President Donald Trump rushed to the industry’s defense and signed an executive order declaring that the US Department of Agriculture “shall take all appropriate action” to “ensure that meat and poultry processors continue operations.”

But even as these executives insisted that closing plants would imperil the US food supply, they were busily exporting loads of meat to China, a new Reuters investigation shows:

While pork supplies tightened as the number of pigs slaughtered each day plunged by about 40 percent since mid-March, shipments of American pork to China more than quadrupled over the same period, according to US Department of Agriculture data.

Smithfield led the pack in shipping meat to China, Reuters reports. Tyson wasn’t far behind. In an April 27 full page ad in the Washington Post and other newspapers, John Tyson, the company’s billionaire chairman, warned of “limited supply of our products available in grocery stores” because plant closures were “breaking” the food-supply chain. Just a week later, on May 4, Tyson president Dean Banks told investors on an earnings call that exports to China “were up significantly” during in 2020, adding that “we expect strong demand to continue as China recovers from this COVID-19 lock-down.”

Consumers can expect to find 30 percent less meat in US supermarkets, and pay 20 percent more for it.

Overall, Reuters reporters found, US companies have exported more than a million tons of pork—about a third of total production—so far in 2020. March and April figures for chicken exports haven’t been released yet, but Chinese demand for it could be strong, too. “Beijing lifted a nearly five-year ban on US chicken imports in November and also waived retaliatory tariffs on meat shipments to help boost supplies,” Reuters adds. By the end of this month, US consumers can expect to find 30 percent less meat in supermarkets, and pay 20 percent more for it, the news service reports, citing a projection from the agricultural lender CoBank.

So why would these companies be shunting pork by the hundreds of thousands of tons abroad when US supermarkets are undergoing shortages? Logistics may be partially responsible. Reuters notes that last year, Smithfield reconfigured its massive plant in Smithfield, Virginia, to devote much of its output to supplying hog carcasses to the China market. The company says it now plans to redirect some of its Virginia plant’s production towards bacon, ham, and chops for consumers at home, but such tweaks take time.

Pork goes to the highest bidder.

But the main driver is likely something else: Over the past year, a deadly, highly contagious disease called African swine fever—thankfully, harmless to humans—has swept through China’s hog farms, killing at least half of its herd, carnage equal to about one in four pigs on the planet. The collapse of domestic hog production caused pork prices to spike in China, meaning the Chinese will pay way more than what we do. Pork goes to the highest bidder.

That’s how capitalism works. But meat company execs should be more up front. When they demand the government to allow them to run their plants, it’s not to prevent domestic meat shortages. They’re doing so to maximize their profits.

In the meantime, an Associated Press data analysis found, the 15 US counties with the highest per-capita infection rates between April 28 and May 5 “all are homes to meatpacking and poultry-processing plants or state prisons.”