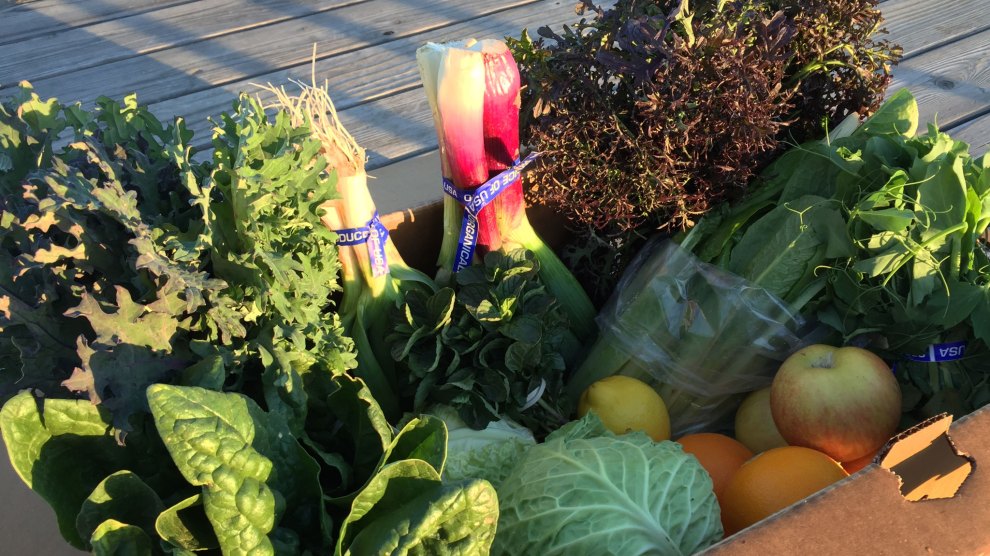 Most of the country is on hold, but fortunately spring is still moving forward. In California, it’s a time of sweetening strawberries and the first tender stalks of asparagus. CSAs—community-supported-agriculture programs—deliver these fresh offerings straight from farm fields to home kitchens.

When stay-at-home orders took hold in March, and trips to the grocery store became fraught because of empty shelves and anxieties about the contagion, CSA boxes suddenly had newfound cachet. Farms from Virginia to Oregon reported a jump in sales. “Is This the Start of a CSA Boom?” one Eater reporter wondered in early April.

Some farms, including Eatwell Farm in Dixon, California, which delivers my biweekly box of goodies, have had to decline new members for fear of running out of produce. Eatwell’s founder, Nigel Walker, passed away in 2017, so his wife, Lorraine Walker, now manages the farm along with her son, Cameron Ottens, and her stepson, Andrew. Lorraine pens a weekly newsletter chock-full of recipe ideas, practical updates on delivery plans, and musings from a rural life. In last week’s newsletter, she included a note about how dealing with the coronavirus pandemic is especially hard on those who’ve recently lost a loved one. “I am not bringing this up because I am needing sympathy or feeling excessively down,” she wrote, “but to let you know, if you have people in your lives who are widowed, please check in with them.”

I reached out to Lorraine to hear how she’s handling life these days and the recent surge in CSA demand. Hear her on our latest episode of Bite:

We provide boxes to our members 51 weeks out of the year. Eatwell has been known for its pastured eggs for a very long time. We are also quite well known for our strawberries and our tomatoes. My late husband Nigel was one of the first farmers in California to actually grow heirloom tomatoes.

For the past several months, we’ve been getting pretty close to about 500 boxes a week. Last week, we delivered over 700. The pickup started two weeks ago on Friday [March 27]. By Wednesday, we realized that we had to actually turn our CSA off to new members. At this point in the season, where we’re between winter and spring, we were afraid we would run out of produce and would have sold more boxes than what we could fill.

“We realized that we had to turn our CSA off to new members.”

One of the things that I did about two years ago was that I started adding products that our members could order to come with their boxes that were not Eatwell Farm products—kimchi from Volcano Kimchi, Aedan Fermented Foods‘ miso, and items like that. One of my drivers and his partner have kind of partnered with us and they’re raising quail on our farm. So we’re able to offer our CSA members their quail eggs and their quail meat. Once the shelter-in-place order was put in place, we saw the membership go up, but what I saw before that, and even faster, were orders coming in from our existing CSA members for all these extra items. I mean, it’s incredible, I think the increase is like sixfold.

And in the last several days, I’ve had text messages and emails from members telling me how much they appreciate the ability to go online and order these items to come with their boxes because it’s saving them trips to the store. But also the other aspect of that is, for instance, my friend Michelle Pusateri, who owns Nana Joes Granola. The first week of all of this, one of her biggest vendors called and said we’re not going to be placing orders for at least 90 days. We can at least contribute a little bit of something for a lot of these food vendors who rely so much on the tech business to bring their products in, in their cafes and their restaurants—it’s been really hard on them.

Nigel actually started farming in England many years ago, and then came to California and started Eatwell Farm with his ex-wife, Frances. And then after a few years they split up and Nigel continued on with the farm*. Back in 2007, Nigel and I got into a relationship and we married in 2011. I remember one of the first times we were out there walking, many winters back, looking at the fennel and leeks, and he’s like, ‘Oh, the crops are looking great. They’ll be ready in a few weeks and that will be nice to have in the box.’ And I’m looking at and thinking, “Huh, they would be so great roasted together, throw in a little winter squash and you’ve got a meal.” Boom. So we were so well-suited because he looked at it from the growing and I looked at it from the cooking.

“If you have people in your lives who are widowed, please check in with them.”

In many ways, I rely on my crew—who Nigel did a very good job of training—to keep the farm physically running. I mean, we are running at full speed because the farm is busy and we’re all working. I have people here, and I’m constantly active. But it did occur to me that for those people who have lost a partner, and living on their own, and [are at] home where they’re not able to go to work, they’re extremely isolated. That person that you would normally turn to, to talk to about all these emotions and situations and problems, and the positives—that person is gone.

My husband is gone. And he was the farmer. So a lot of times over the last two weeks, I’m constantly wanting to say, “Nigel, what would you do?” And, you know, he’s not there to answer those questions. I know I’m not the only one. He may have a better sense of how the crops will be coming in over the next few weeks. But for the most part, everything that’s been happening is so immediate, and responses have had to be so immediate. And we’ve done a pretty good job of staying on top of all of that and handling all of the immediacy behind all of this. Making sure we actually have enough boxes. And do we have enough bags to put the produce in? Do we have enough bags, put all the extras in? So mostly what I hear him say is: “You got it. You’re doing it. Just keep doing it.”

*Due to a transcription error, the original version of this post contained an incorrect date for Nigel’s arrival to California and left out information about Eatwell’s founding.