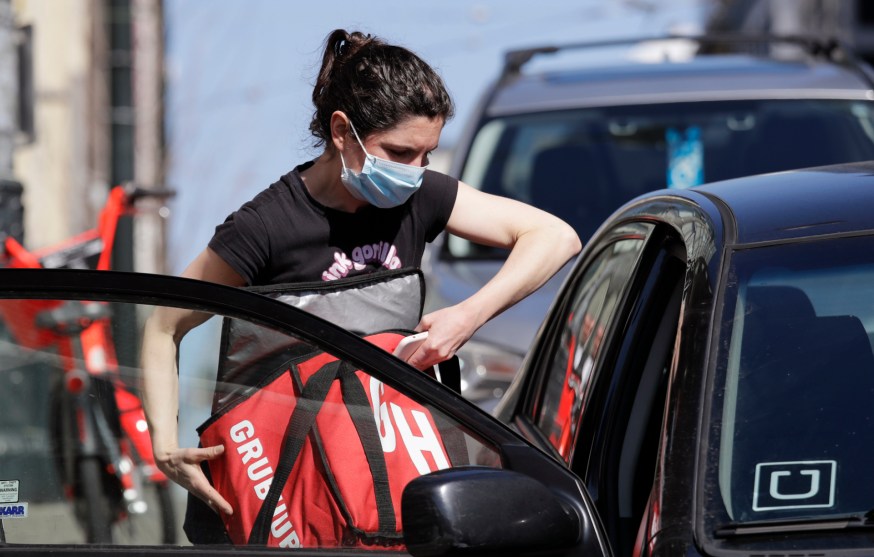 Some states are increasing benefits to those providing essential services—Vermont and Minnesota, for example, have designated grocery clerks as “emergency personnel” in order to give them free child care. But in California, where residents have been told to stay at home unless absolutely necessary, gig companies are fighting against giving their workers longterm benefits.

Here’s the back story: Last year, the California legislature passed Assembly Bill 5, a law that expanded a 2018 state Supreme Court decision making it harder for companies to classify employees as independent contractors without overtime pay, health benefits, or paid sick leave. AB 5 explicitly targeted companies like Uber and Lyft, which have relied on a steady stream of contract drivers to rake in huge profits. The law went into effect on January 1, but little enforcement has taken place, and tech companies have vowed to fight it, throwing $110 million into a measure for the November ballot that would exempt gig companies from AB 5, and suing the state to block it in the meantime.

Then came the coronavirus, which has exposed the problems of gig work. Delivery people say they’re afraid to stop working—despite the risk of illness—because they have no safety net. They need the money now, before the work dries up. They work in fear: washing their car between trips (as quickly as possible, since they don’t get paid when they’re not driving), mostly buying their own sanitizing supplies.

But gig companies still support the ballot initiative, called the Protect App-Based Drivers, to revoke workers’ employee status. Mother Jones contacted four of its major backers: Lyft, DoorDash, and Uber, which have each invested $30 million to pass the measure, and Instacart, which has donated $10 million towards the effort.

A spokesperson for Uber said in an email that, “yes we are still 100 percent in support” of the ballot measure despite COVID-19. Instacart said it will continue to push “to protect the rights of on-demand rideshare and delivery drivers to choose flexible work as independent contractors.” DoorDash had “nothing to add” beyond noting that they’d recently promised fourteen days of sick pay to anyone who tests positive for COVID-19. Lyft did not respond to a request for comment.

Without acknowledging them as employees, tech companies have made some changes in light of coronavirus to protect workers. As I reported previously:

Instacart rolled out a sick-pay policy, including 14 days of pay for anyone affected by the coronavirus. DoorDash issued guidance for merchants and said in a statement that it is working on “introducing a program to assist Dashers financially if they are diagnosed with COVID-19 or put under quarantine by a public health agency.” Amazon has created a $25 million initial fund to help contractors. Lyft told Mother Jones it has “an internal task force” and is “prepared to take action as needed.” Uber offered “financial assistance” for 14 days to those diagnosed with coronavirus.

“Forcing rideshare and delivery drivers to become employees,” says Stacey Wells, a spokesperson for the Protect App-Based Drivers initiative, “will fail to extend new benefits to workers and instead lead to the widespread elimination of work for hundreds of thousands of Californians and potentially jeopardize these essential services at a time when millions are counting on them.” Wells notes that the ballot measure would give contractors a healthcare stipend (to buy insurance on the marketplace) and injury insurance.

According to Wells, these perks in the initiative would “insure against illnesses and injuries incurred while driving—including contracting a virus while driving on a platform.” (The injury insurance has to be “suffered while the app-based driver is online with a network company’s online-enabled application or platform.”)

The argument from gig companies, and some Republicans, is that the regulations hinder a surge of the unemployed from joining the gig economy. Uber CEO Dana Khosrowshahi told the New York Times that “[t]his situation certainly demonstrates the downside of attaching basic protections to W2 employment.” After the pandemic, the argument goes, the unemployed will flock to app-based work for a bit of pay to supplement their incomes. Employment would stop that.

But Jerome Gage—a 27-year-old Lyft driver in Los Angeles county—says the continued push for the November ballot measure and the idea that employment status would hurt the industry is “completely infuriating.” Gage wants AB 5 to be enforced now, to ensure his protections as a driver. “I’m praying, I’m hoping, I’m crossing my fingers that I’m not put in a difficult decision about whether to continue driving,” Gage said of fears he might get sick. “Lyft is providing such a vital service because it helps you avoid unnecessary exposure from public transportation. It’s just a shame that the companies aren’t providing basic minimum wage, or basic sick leave, or paid time off, for drivers to take care of their own health.” Gage says employment is a simple remedy to the problems and it doesn’t have to be more complicated.

Tyler Sandness, an organizer for Rideshare Drivers United and former Lyft driver, agrees. “Drivers struck for this law last year. We lobbied over the summer and got the law passed,” he said of AB 5. “For us the matter is already settled. We’re demanding action from the state to enforce it.”

RDU is pushing the state to enforce AB 5 by getting drivers to file for unemployment insurance—something only available to former employees. Uber and Lyft are trying to block drivers from receiving unemployment benefits, according to the New York Times.

Gage, for his part, said he can’t stop driving. He’s been working all week, despite the risks.

In the late afternoon last Saturday, Gage picked up a commuter headed to her job at Little Ceasers. She hopped in the back of his Nissan Altima (no one gets in the front anymore) and “she was just really, really surprised that I would be working right now,” Gage remembers. “She said to me, ‘I really wouldn’t want like 100 million people in my car right now.'”