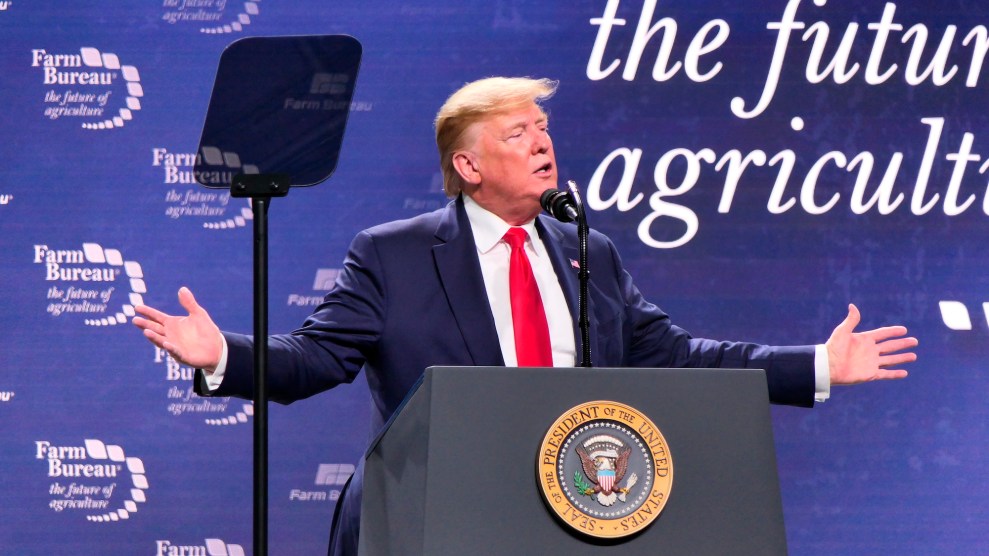 President Donald Trump speaks to a crowd of over 5000 at the American Farm Bureau convention in Austin, Texas, in January. Jeff J. Newman//picture-alliance/dpa/AP Images

Presidential budgets, released annually, are aspirational documents—they display an administration’s intentions and goals, but are typically considered “dead on arrival” in Congress, which ultimately sends its own federal spending proposal to the White House. This year’s version, which has no chance of clearing the Democratic-controlled House of Representatives, sends a jarring message to a key Donald Trump constituency: large-scale farmers who rely heavily on federal programs.

The proposed budget calls for a 31 percent cut to a program that subsidizes crop insurance, a key support for corn and soybean farmers during extended periods of low prices, such as the one currently in effect. This, even though Trump enjoyed strong farm-country support in 2016 and loves to flatter “our Great Patriot Farmers,” as he once put it on Twitter. The budget would also slice about 10 percent—$9.1 billion over 10 years—from the US Department of Agriculture’s conservation programs, which provide farmers with incentives to use practices that keep soil in place and reduce water pollution.

The news lands as farmers are still reeling from a rough 2019, a year marked by soil-destroying mega-storms, export-killing trade wars, low crop prices, and spiking bankruptcies. After launching the trade wars in 2018, the administration came up with a pot of money ultimately worth $28 billion to compensate farmers for exports sacrificed in the tariff standoff. That program ended in early February. Trump has hailed recent agreements with key trading partners like China and Mexico as a boon to farmers. “I’ve told everybody, ‘You got to buy a lot of land, and you’ve got to get much bigger tractors right now,’ because we did a great deal with China,” he boasted at the annual American Farm Bureau Federation meeting in January.

The coronavirus crisis is putting a chill on global trade, just at the moment when trade agreements with China seemed poised to increase farm exports and boost prices.

But 2020 is shaping up to be another rough stretch in farm country. Prices for key crops like corn and soybeans are “treading water right now,” said Iowa State University agricultural economist Chad Hart. The reason: the coronavirus crisis is putting a chill on global trade, just at the moment when trade agreements with China and other key trading partners seemed poised to increase farm exports and boost prices. “The trade deals took us one step forward and coronavirus takes us one step back, and sort of leaves us where we’ve been for a while,” Hart said. In other words, despite Trump’s big promises about a coming export boom, the farm economy is still in tatters.

It remains to be seen whether his desire to cut support for farmers during hard times will erode his popularity in farm country during an election year. The USDA programs Trump wants to cut are embedded in the farm bill, that twice-per-decade omnibus legislation that was renewed in 2018 and won’t be up again for renewal until 2023. “But they do send a signal of [the administration’s] intentions for the next farm bill should they get a second term,” said Ferd Hoefner, senior strategic advisor at the National Sustainable Agriculture Coalition. “Farmers and farm groups should take them seriously as a signal—scaling back conservation funding just as we are building public support for a significantly increased investment to combat climate change and deal with water quality and water shortages would take us in exactly the wrong direction.”

Some farmer groups are taking note.”As both a presidential candidate and now as president, Donald Trump has repeatedly expressed his appreciation for and dedication to American farmers,” National Farmers Union president Roger Johnson said in a statement in response to the budget release. “Yet year after year, his budget has failed to address the very real economic challenges facing rural communities.”