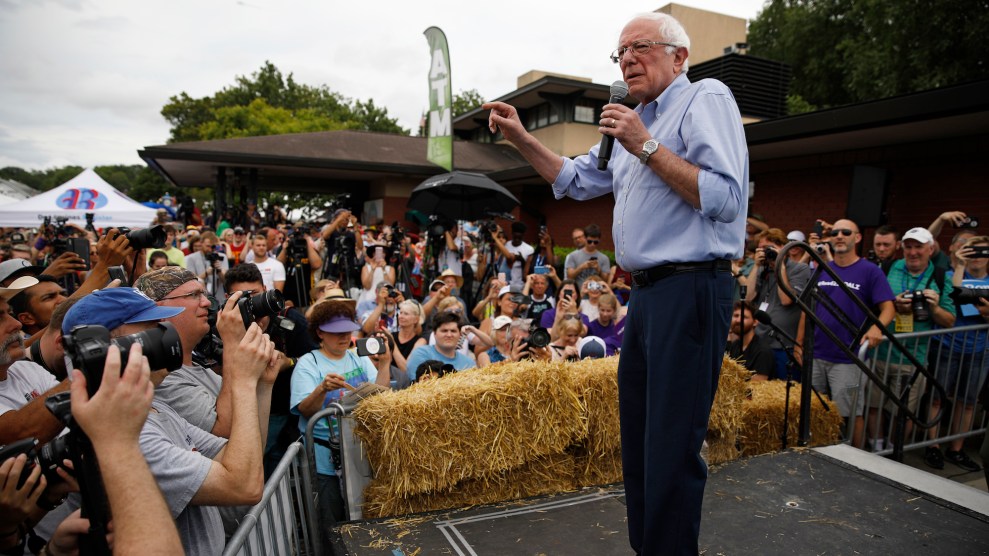 Probably so, says Art Cullen, editor of the small-town Iowa newspaper the Storm Lake Times and winner of the 2017 Pulitzer Prize for editorial writing. At a Jan. 29 event in Berkeley—less than a week before Iowa’s big night launches the long national contest to choose the Democratic presidential nominee—Cullen sat down with author and University of California-Berkeley journalism professor Michael Pollan to discuss the caucus, the multiple farm crises roiling the Heartland, and the solutions being offered by the Democratic hopefuls who have been barnstorming the state.

Hear Michael Pollan and Art Cullen on this special edition of Bite podcast, sponsored by the Berkeley-11th Hour Food and Farming Journalism Fellowship:

Cullen plies the newspaper trade in a small town situated amid the corn and soybean fields of northwest Iowa. Its main features are a massive pork-processing plant run by meat-packing giant Tyson, and a natural lake that had become shallow and muddy after decades of receiving runaway soil from nearby farmland—a consequence of Iowa’s soil-erosion crisis that I reported on here and here. Under his editorship, the Storm Lake Times (circulation: 2,800) has vigorously stood up for the Tyson plant’s largely Latino-immigrant workforce from the racist tirades of Rep. Steve King, the racist who represents the district in Congress. And the paper has crusaded to restore the lake. The latter issue ultimately led to a Pulitzer-winning series of editorials challenging the agrichemical companies that dominate Iowa farming.

Since winning the prize, Cullen has emerged as a powerful voice. He writes regularly for the Guardian and the New York Times, and Democratic candidates make the trek to Storm Lake to seek his support. In the weekend before sitting down with Pollan, Cullen hosted Andrew Yang, Bernie Sanders, and Pete Buttigieg at his newspapers’ office. Altogether in the current election cycle, 15 Democratic presidential contenders have sat down for interviews with the editor.

As crop prices flounder, spring floods become increasingly fierce, soil washes away, and fertilizer runoff pollutes water from Des Moines to the Gulf of Mexico, the state’s growers are ready to stake out new directions, Cullen told the Berkeley audience. Leading Democratic contenders are appealing to them with bold agendas for policy reform.

At a candidate’s forum Cullen hosted along with the Iowa Farmers Union last March, Sen. Elizabeth Warren “came in there with a Rosie the Riveter routine,” riling up the crowd with promises to break up the agribusiness giants and ramp up funding for programs that subsidize farmers based on how much carbon they store in soil, he said. After Warren threw down the gauntlet at Cullen’s event, Sen. Bernie Sanders and other candidates upped the farm policy ante. Now “regenerative agriculture“—relying on diverse crop rotations and cattle grazing instead of hyper-focusing on growing corn and soybeans—has emerged as a common buzz phrase on the campaign circuit.

“It’s a whole different conversation than what we’ve been hearing since 1972, when Earl Butz, the agriculture secretary, said to plant fencerow to fencerow,” he added.

After hearing Cullen riff on the turn toward regenerative ag among Iowa growers, Pollan asked him, “So you think we’re really at an inflection point?”

“Oh, absolutely. We can fix this, we can solve this problem,” Cullen responded.

“That’s the most encouraging news I’ve heard about agriculture from Iowa in a very long time,” Pollan marveled.

Meanwhile, as the Iowa caucus approaches, it’s impossible to predict which candidate will snag the most delegates—and momentum—heading into the bruising contest ahead. Cullen himself delivered his coveted endorsement to Warren back in December. The Massachusetts senator is “charting a course that uses agriculture to lead the battle against climate change by paying farmers to sequester carbon and prevent surface water pollution,” he wrote.

“Basically all of the candidates” are drawing applause from rural audiences by pushing regenerative agriculture on the stump.

More recently, Cullen has warmed to Sanders, who has surged in the polls recently and has also released an ambitious plan to boost regenerative agriculture and crack down on dominant agribusiness conglomerates. “Three political rallies in a small north-west Iowa town over the weekend convinced me that the polls showing Bernie Sanders leading among likely caucus-goers have it about right,” Cullen wrote in a Jan. 28 Guardian column.

Whoever emerges victorious in Iowa, farm-policy transformation is shaping up to be a winning message. Josh Cook, who has been shadowing candidates on the trail for the political reporting site Iowa Starting Line, said that “basically all of the candidates” are drawing applause from rural audiences by pushing regenerative agriculture on the stump. With climate change emerging as an undeniable force, farmers are tired of being painted as part of the problem. “It’s resonating with them” to hear that by storing carbon in the ground and preventing their soil from eroding away, “they could be part of the solution, too.”