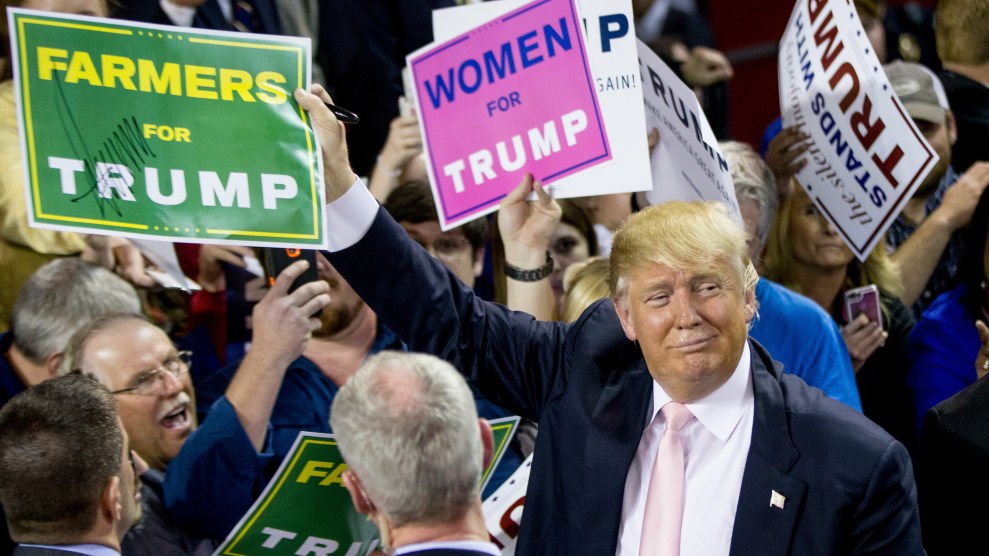 President Donald Trump, speaking in Iowa last week, made a bold prediction about his prospects in the Hawkeye State this coming November: “We’re going to win the great state of Iowa, and it’s going to be a historic landslide,” he thundered.

Trump may actually turn out to be right this time (though probably not about the victory margin). Democratic Party decision-makers have decided that the 2020 nominee can’t compete with Trump for rural votes, as recent pieces by veteran Politico and Washington Post reporters laid out.”A new sentiment has echoed throughout recent conversations with Democratic strategists, activists and campaigns, a consensus that would have been unthinkable just eight years ago: Iowa is no longer a battleground,” Politico‘s Tim Alberta reported. “Not in 2020, anyway.” Iowa is a relatively rural state, and the Dems feel like there’s a bigger payoff to be found in more metropolitan-heavy regions, the articles report.

If the Democratic candidates do fly over farm country, they would be following the lead of Hillary Clinton in 2016. During that year’s general election, Clinton basically wrote off the rural vote. Months before the Iowa caucus, she alighted on Ankeny, a small town outside of Des Moines, to release a vague rural policy plan. After narrowly defeating Sen. Bernie Sanders in Iowa, she trained her gaze to more population-dense regions, essentially ignoring rural-dominated counties. The reasoning was simple. In a fiercely contested national campaign, time and resources have to be allocated carefully, and rural areas tilt conservative and have been draining population for decades, while cities and suburbs grow.

The Clinton campaign’s decision ended up benefiting Donald Trump, who ran a much more prominent rural operation. Clinton not only lost Iowa by nearly 10 percentage points in the general election—a state Barack Obama handily won twice—but she narrowly surrendered the much larger farm-heavy states Pennsylvania, Michigan, and Wisconsin, where her strong advantage in metropolitan regions was trumped by her rural collapse. “Hillary lost rural America 3 to 1,” a Democratic insider told Politico. “If she had lost rural America 2 to 1, it would have broken differently.”

There’s much more at stake than Iowa’s six electoral votes. Back in 2008, Barack Obama campaigned hard in farm country during the general election and won 45 percent of the rural vote, helping him paint Pennsylvania (20 electoral votes), Michigan (16), and Wisconsin (10) blue. He clung to those states in 2012, even though his rural support slipped to 39 percent. In 2016, Clinton learned the hard way that dipping much below that level can be disastrous, says Jake Davis, policy director for Family Farm Action, a political advocacy group. She grabbed just 34 percent of the rural vote, and what had been a blue wall in the eastern farm belt—stretching from Iowa to Pennsylvania—came tumbling down.

The next Democratic candidate doesn’t need to devote massive resources to farm counties with the goal of beating Trump in rural America. But completely ignoring these regions would be foolish.

The next Democratic candidate doesn’t need to devote massive resources to farm counties with the goal of beating Trump in rural America, Davis said. But completely ignoring these regions would be foolish. The nominee “has to show up,” he said. “Make some campaign stops, talk about [rural people’s] issues, listen to their issues, and there’s 10 percent of voters out there who feel like they’re disenfranchised from both parties,” he said. “It’s there for the taking, and it’s clear President Trump isn’t taking care of rural areas,” he added, referring to the administration’s export-roiling trade machinations, its policies favoring big meat packers over independent farmers, and its approvals of mega-mergers among seed/agrichemical conglomerates.

In contrast, this year’s Democratic contenders—especially senators Elizabeth Warren and Bernie Sanders—have actually released bold rural/farm policies, which I’ve summarized here. They promise to crack down on the seed, pesticide, and meat-packing corporations that dominate farm country, and pledge to enlist farmers in the fight against climate change by paying them to store carbon in the soil.

At a forum in California last week—which you can catch on the latest episode of Bite podcast—Art Cullen, the Pulitzer-winning editor of the small-town Storm Lake Times in rural northwest Iowa, sounded similar themes. Clinton lost the Midwestern farm belt because “she never showed up,” Cullen said. “The first rule of politics is to ask people for their vote. She never asked the Midwest for their votes.”

Over the past several months, as Democratic presidential candidates have barnstormed the vast rural stretches of the state, hoping to generate momentum by showing well in the Feb. 3 Iowa caucus, their vows to break up the agribusiness oligopolies and pay farmers for climate-ready agriculture have drawn cheers, Cullen said. Their message was well-timed: A long slump in crop prices persists, farm bankruptcies keep climbing, and another round of massive spring storms in 2019 put Trump’s climate-change denialism in an unflattering light.

Asked if Trump could triumph in the region again, Cullen was incredulous. Farmers “are fed up, and for the life of me, I’ll eat your left shoe if Iowa goes to Trump again,” Cullen said. Perhaps those Democratic strategists should think twice before writing off farm country.