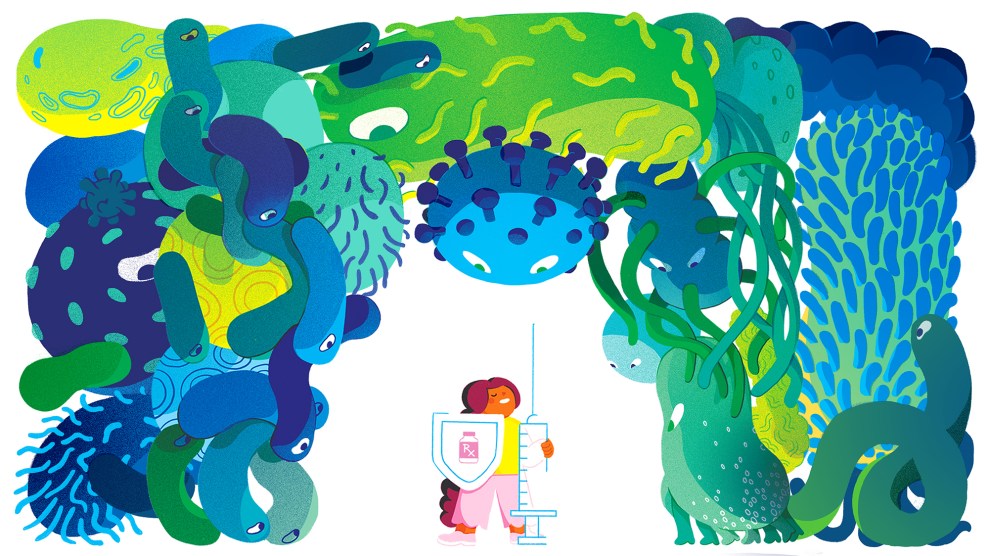 In 1979, Danish anthropologist Peter Aaby, in his mid-30s, was studying malnutrition in the small West African country of Guinea-Bissau when the outbreak hit—a measles epidemic of horrific proportions. At least 20 percent of children under 5 years old who got measles that year would die. He and his colleagues began vaccinating, hoping to save the remaining healthy children.

His team’s effort would lead to a remarkable discovery: The vaccinated children, about 1,500 of them, didn’t die—not from measles or any other condition. In a year, the kids’ mortality rate for all causes declined threefold compared to unvaccinated children. “This is strange,” he began to think. “Something incredible happened here.”

Decades of research and hundreds of studies later, Aaby and a growing community of scientists now hypothesize that some vaccines may help children fight more illnesses beyond the “target” infection. “Your immune system is so smart—it’s just like a brain,” explains Christine Stabell Benn, a professor of global health at the University of Southern Denmark, and Aaby’s partner both in life and in research. “It learns something from the event [of getting a vaccine] that it can use in other situations.” The pair have observed this knock-on effect in children in Guinea-­Bissau who’ve gotten vaccines for tuberculosis (BCG), smallpox, and polio.

Other research has detected similar results, called “nonspecific effects.” In a 2015 meta-study, researchers analyzed hundreds of thousands of hospitalizations in Spain that occurred between 1992 and 2011 and found that 10- to 14-year-olds who had received the BCG vaccine at birth saw nearly 70 percent fewer hospital visits due to non-tuberculosis infections than those who had not. In 2018, a study of more than 3,000 hospitalized adults in New Zealand showed that having previously gotten the flu shot decreased the severity of illness and hospitalization time for people who ultimately contracted the flu—even for strains they hadn’t been protected against. The average vaccinated patient, the study found, spent four fewer days in the ICU for flu-related infections than their unvaccinated counterparts. (The flu vaccine also reduces your risk of hospitalization in the first place.) And in 2019, a small study led by researchers in England suggested that the typhoid vaccine, made with a weakened form of salmonella, might also help combat the flu by giving the immune system a “boost” to fight other pathogens.

The exact mechanisms behind these unintended positive effects aren’t fully understood. One clue is that the vaccines that show off-target benefits are in most cases “live,” meaning they contain an active version of a pathogen in a weakened state. (Most flu shots given in the United States are not live.) In 2012, researchers published a landmark study that revealed how some nonspecific effects might work. As Mihai Netea, a professor at Radboud University in the Netherlands and an author of the study, describes it, when you receive a live vaccine for a disease, certain cells in your body “bookmark” in their DNA the instructions for fighting it. Next time you encounter the pathogen, or one like it, “they know exactly where to open the book,” he says.

But research on the nonspecific effects of vaccines is controversial—in part because of concerns about the way Aaby and Stabell Benn conducted their initial studies. For example, the children in Guinea-Bissau most likely to receive a measles vaccine, which is administered as early as 12 months of age, were probably healthier to begin with, since parents were unlikely to bring a sick child to receive a live measles vaccine. Other studies by Aaby and Stabell Benn have shown negative outcomes of vaccines: In the developing world, children—especially girls—who receive standard, nonlive vaccines for tetanus and polio are more likely to die from any cause than their unvaccinated peers, according to their research. It’s unclear why—and the evidence is limited.

Stabell Benn believes that switching to a live vaccine could eliminate many of those negative effects. In a 2019 TEDx talk, she argued that a simple change to the World Health Organization vaccination sequence to emphasize live vaccines over nonlive ones could save more than a million children every year in the developing world. While live vaccines do come with some problems—very rarely, they can cause a person to contract a form of the disease that they’re supposed to prevent—she believes the benefits far outweigh the risks. But in 2016, a group of experts commissioned by WHO analyzed existing studies on the nonspecific effects of vaccines and recommended no change in the sequence of live versus nonlive vaccines—­though they noted the data “raise sufficient concerns” and they “strongly recommend further studies.”

While experts admit that no one fully understands how immunizations activate our natural defenses, many scientists are optimistic about the potential of vaccines, especially the live kind. Netea believes they might even be able to “rewire” the immune system to fight all sorts of conditions, including allergies and cancers. Live vaccines may also hold the secret to making current ones more effective. “As I see it,” Stabell Benn says, “we have a wonderful toolbox with the vaccines.”