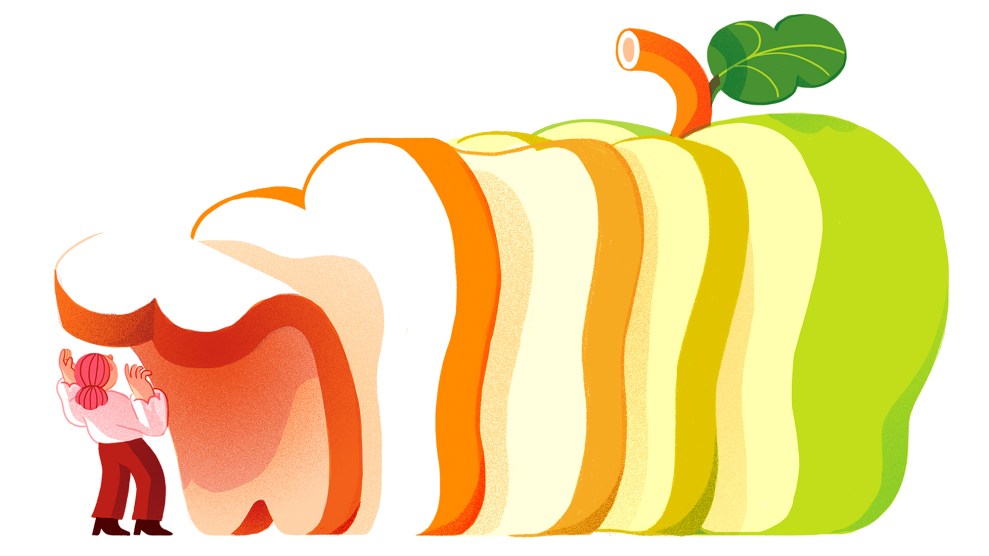 Of all the insults greenhouse gases hurl at our food supply—from more severe droughts and floods in key agriculture regions to declining yields of staple crops—the most insidious may involve a steady decline in the quality of all the plants we eat.

That’s the startling message of a growing weight of research led by Irakli Loladze, a mathematical biologist with joint appointments at the Bryan College of Health Sciences in Nebraska and Arizona State University. On the latest episode of Bite—the introduction to our new series, “Eating in Climate Chaos“—I caught up with Loladze to learn more about this slow-motion nutritional train wreck and what we can do about it.

Plants are very flexible in their chemical composition, Loladze explained. When the air that surrounds them is richer in CO2, they use it to synthesize more carbohydrates, including starches and sugars, which are then stored in plant cells. Essentially, more carbon in the air means more carbs in plants, and these carbs then dilute the other beneficial molecules, including protein and some vitamins and minerals, taken up and/or synthesized by the plants.

More carbon in the air means more carbs in plants.

Loladze asked me to consider my breakfast on the morning of our interview, which was centered on a piece of toast. Citing a 2004 study led by Lewis Ziska, then a US Department of Agriculture researcher, now a professor at Columbia University, Loladze said that the wheat I consumed that day likely contained lower levels of protein than the wheat that people were consuming decades ago. More recent research suggests that it also delivered fewer essential minerals such as calcium, magnesium, iron, and zinc.

And what’s true for humans is also true for all the herbivorous and omnivorous animals that rely on wild plants for nutrients. They’re getting less of them now, too, he said, and the deficit moves up the food chain, from the rabbit nibbling on weeds to the bobcat that eats that rabbit. The effect has already shown up in cows, which are gobbling up grasses with lower levels of vital nutrients, which has forced the beef industry to add mineral supplements to cattle rations.

Interestingly, the drop in these chemicals has no effect on the plants themselves. “It’s not like plants are hurting” from the extra CO2, he said. “They have mechanisms to be flexible, and they just store more” carbohydrates. “Plants aren’t the least concerned about the quality of our nutrition—we eat them, we’re kind of their enemies. So diluting the quality of their consumers’ food is something that plants really don’t mind at all.”

In a paper published in 2018, Loladze and a team including US Department of Agriculture and University of Washington researchers found that increasing CO2 concentrations had diminished the nutritional quality of rice, causing significant drops in protein, iron, zinc, as well as vitamins B1, B2, B5, and B9. But research on carbon dioxide concentration and food quality gets very little funding, Loladze noted, and at least under President Donald Trump, is usually buried by the US Department of Agriculture. Rather than sound the alarm about the decline of a crucial staple crop, the USDA declined to publicize it, and tried to convince the University of Washington not to, either, as Politico’s Helena Bottemiller Evich reported in June. Loladze told me that in Trump’s USDA, there’s an “implicit directive not to promote agriculture research related to climate change.”

In Trump’s USDA, there’s an “implicit directive not to promote agriculture research related to climate change.”

Meanwhile, of course, we keep burning fossil fuels, spewing more carbon into the air, which in turn gets taken up by the plants we eat, diluting the vital nutrients with loads of carbs. I asked Loladze what we can do about it, given that global carbon emissions show no sign of dropping anytime soon. He said that regenerative farming practices, as well as adding certain minerals to soil, can counteract at least some of the carbon dilution. Right now, he said, we pay farmers for yield—they’re rewarded for total output, not for the amount of nutrients in their crops.

“If we want to make our food more nutritious, we should change the incentives,” he said. “We should start paying farmers for nutritional quality—and once that happens, people will get healthier and there’ll much less hunger hidden hunger, which is when people get more enough calories but don’t get enough nutrients.”

This article has been updated and corrected after a print version was featured in our January/February 2019 issue.