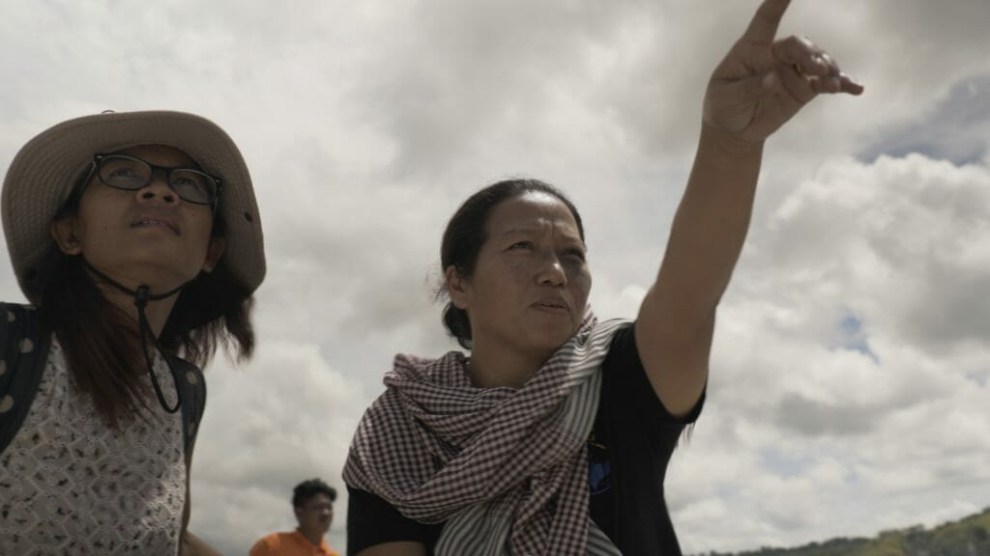 Patima Tungpuchayakul (right), a Thai abolitionist, with members of her team on a trip to free enslaved fishermen.Courtesy "Ghost Fleet"

Ghost Fleet is a gripping new documentary about modern-day slaves in the Thai fishing industry. The film delves into the sordid labor practices of an industry that supplies the United States, Europe, and Asia with seafood, but it does so by focusing on the compelling work of Bangkok-based Patima Tungpuchayakul, an abolitionist who has devoted her life to helping “lost” men return home. She works with a former slave, Tun Lin, who was kidnapped when he was 14 and forced to fish without pay for 11 years. Together, they visit remote islands in Southeast Asia, where captive men have lived for years—never seeing their families until Tungpuchayakul and her team show up and free them.

The documentary grew out of a piece co-director Shannon Service and a colleague did for NPR in 2012—a story then followed up by The New York Times, AP, the Guardian, and others. But the film has an emotional power that’s missing from the news reports, captured in the lines etched on the men’s faces, in their tears, in the remote tropical locations where the film takes place, and in the strength of the protagonist, Tungpuchayakul.

Service took time out of her busy screening schedule for the film, which is currently playing in selected theaters in the US, to talk about the project.

Sam Fromartz: How did the film come about?

Shannon Service: I’ve been on this story for seven years. I started with another reporter, Becky Palstrom, and together we spent six months looking into slavery in the Thai fishing industry. We were investigating how it was that tens or hundreds of thousands of men have crossed borders, gone into policed ports, gone out to sea, and disappeared, and nobody was really talking about it. The story took us across Southeast Asia.

They were convinced to go into Thailand, or they just walked into a bar and were drugged and woke up on board.

While we were doing this reporting it also became obvious that the underbelly of the fishing industry was a crazy, fascinating world. Each one of the men we interviewed could have had a Hollywood film scripted about him. These men left home with the best of intentions to support their family; they were convinced to go into Thailand. Or they just walked into a bar and were drugged and woke up on board.

They’re living in the space of an 18-wheeler, saving each others’ lives, keeping each other sane and enduring incredible hardship. Some of them had never seen the ocean before, or swam, and suddenly they’re on a boat for many years. If they do see land, they’ll grab something that floats, jump into the water to escape, land on an island, and then sleep in trees to avoid snakes. Or they’ll marry into an indigenous community, but their actual family thinks they’re dead. And they have no hope of getting home. Doing the radio documentary, it became clear to me it needed to be a film. And luckily Jeffrey Waldron (co-director) and Greg Kwedar (co-producer) heard the radio piece and contacted me.

SF: What was the process of making this film over so many years?

SS: You go shoot a little bit, raise money, shoot more, raise more money. Luckily, there were ocean-focused groups who really saw what we saw: That slavery is the Achilles’ heel of overfishing—these boats went further and further from shore and they needed a labor force. So human traffickers stepped into the gap and started selling people. If you have to adhere to good labor standards, decent pay, and get men home to their families, you can’t send these boats around the world skirting international and national laws to catch fish. We got a number of oceans organizations and people on board, including the director of The Cove, oceans expert and producer Jon Bowermaster, and Vulcan Productions, and they’ve been absolutely critical. They understood that the film was about the intersection of food, human rights and environmental advocacy.

SF: Was there pushback because your characters do not speak English, they aren’t the white environmentalist saving the world?

SS: You’re right, and it’s definitely been a longer and harder road, because of that. This is about a woman of color saving men—so it turns the typical Hollywood narrative on its head. We actually had a lot of opportunities to get fully funded if we could “find a character that the audience can relate to.” And that’s code for white, straight, men. There are a lot of Western groups that have been doing amazing work on this issue but they are not doing the kind of work that Patima and Tun Lin are doing, which is incredibly cinematic, front line, incredibly human, daring work. We heard things like, “Okay, we’ll give you the funding as soon as you find the Western hero that speaks English.” And the message is, these issues are only solved by Western heroes, which is rarely the case. But we stood our ground. I’m very proud of the film for that and proud of our team, but it’s definitely been much harder.

“We actually had a lot of opportunities to get fully funded if we could ‘find a character that the audience can relate to.’ And that’s code for white, straight, men.”

SF: So what has been the reception for the film?

SS: It’s been extremely strong at film festivals, playing to mostly sold-out rooms. People are very moved. There are a lot of tears. It’s a very emotional film and people are really receiving it with a lot of openness. We’re getting the same reception from the seafood industry. We didn’t do a name-and-shame film where we point out one company, because it’s a systemic issue; if that particular company were to shift, people would think the problem was solved when it’s not. So it’s really opened doors in seafood circles in a reflective way, rather than in a bad-PR way.

SF: And what’s the status of slavery in the seafood industry? You show Patima’s dramatic work freeing these workers, but is slavery still the status quo?

SS: It is, more or less. It’s extremely difficult to get solid numbers on it because it’s a black market. The Thai government says this is all in the past, but that is belied by the fact that there are rescues going on all the time. The government is taking admirable steps in the right direction in terms of putting more boots on boats, but they lag way behind in prosecuting captains or owners. And while Thailand is not alone—there are certainly incidents on boats ranging from South Korea to Scotland—Thailand still leads the pack in terms of the scale of this problem.