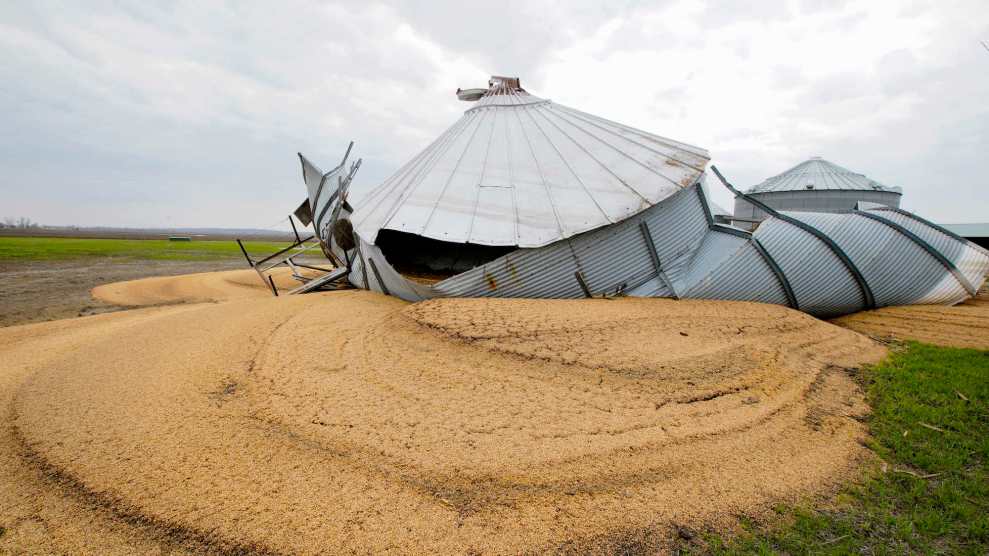 In April, flood waters from the Missouri River destroyed grain silos and washed soybeans out of them, on a farm in Bellevue, Neb. Nati Harnik/AP Photo

Since President Donald Trump took office, the US Department of Agriculture has “refused to publicize” its own scientists’ research on the impact of climate change on farming. That’s according to an investigation by Politico’s Helena Bottemiller Evich, published earlier this week. The report, while jarring, is not surprising. The USDA secretary, former Georgia Gov. Sonny Perdue, has called fixation on climate change a “running joke” and publicly opined as recently as 2017 that “we don’t know definitively” what causes it.

Even as the USDA downplays its own research on climate change, farmers are straining under extreme weather events like the one’s predicted to occur under global warming. On Monday, the USDA released its latest weekly crop bulletin showing that corn and soybean plantings remain way behind schedule after heavy rains and floods all spring left the Midwest’s farms a muddy mess. Brian Corkhill, who farms 1,300 acres of corn and soybeans in northwestern Illinois, told me that as of June 7, he had experienced “basically six weeks straight of rain,” giving him only two days that were dry enough for planting the entire spring.

This spring’s chaos, marked by frequent storms and epic floods, is “not a one-off event” in corn-and-soybean country, says Richard Rood, a meteorologist and professor of climate research at the University of Michigan. Over the past decade, “we’ve been seeing more and more extreme precipitation in that part of the country,” Rood says—not just wetter springs overall, but also “more and more precipitation coming in extreme events,” like the bomb-cyclone storm that caused severe flooding in March. The Midwest’s spring rains are driven mainly by evaporated water from the Gulf of Mexico. Rood says that as the climate warms, more water evaporates. Warmer air, in turn, can hold more water.

“It’s not your father’s climate.”

With those forces in place, the Midwest is set up for more wild springs, Rood says. The Midwest boasts one the globe’s richest stores of topsoil, and farmers there use it to churn out the the corn and soybeans that suffuse our supermarkets—providing much of the fat and sweetener for processed food, and the feed for the cows, pigs, and chicken that stock the meat case. The region’s current two-crop (corn and soybeans) system developed and became central to our food supply during the second half of the 20th century—a period of relative climate stability. Those days our over, and farmers are going to have to tweak their practices to adjust, Rood says. He adds: “It’s not your father’s climate.”

Rood’s analysis echoes the Fourth National Climate Assessment, a Congressionally mandated, once-every-four-years report by the US Global Change Research Program. The Trump administration did its best to bury it, quietly releasing on the Friday after Thanksgiving last year. The report found that winter and spring precipitation “have increased in frequency and intensity since 1901” and are “projected to increase by up to 30 percent by the end of this century.” As for farming, “increases in humidity in spring through mid-century are expected to increase rainfall, which will increase the potential for soil erosion and further reduce planting-season workdays due to waterlogged soil,” the report found. Meanwhile,  heat stress from warmer temperatures will likely cause corn and soybean yields to drop by as much as 25 percent by mid-century.

In this context, Bottemiller Evich’s Politico report about the USDA’s downplaying its own climate research from its own Agricultural Research Service scientists is harrowing. She found a “persistent pattern in which the Trump administration refused to draw attention to findings that show the potential dangers and consequences of climate change,” including “at least 45 ARS studies related to climate change since the beginning of the Trump administration that did not receive any promotion.” In response, a USDA spokesperson told Bottemiller that the department “has several thousand scientists and over 100,000 employees who work on myriad topics and issues; not every single finding or piece of work solicits a government press release.”

The Politico report comes the heels of Perdue’s controversial decision to move two other crucial USDA research agencies from the capital to Kansas City. One is the Economic Research Service, which crunches data and produces widely read analyses, including on climate change. The other is the National Institute of Food and Agriculture, which funds agricultural science. The plan to relocate has crushed morale within those agencies, leading to an ongoing exodus of scientists. ERS and NIFA employees both voted to unionize in the wake of the decision, and an internal union survey found that as many as 80 percent of ERS employees will quit rather than move to Kansas City, Politico reported Tuesday afternoon.

“Farmers are already experiencing the effects of climate change, and the federal government should be doing everything it can to give farmers the research they need to stay in business.”

Meanwhile, Democrats in Congress are moving to defend USDA’s climate research. Rep. Chellie Pingree (D-Maine) released a letter Tuesday morning requesting that the department’s internal watchdog, the Office of the Inspector General, investigate the “suppression of valuable climate research” conducted by the Agriculture Research Service. “Farmers are already experiencing the effects of climate change, and the federal government should be doing everything it can to give farmers the research they need to stay in business,” she added.

Sen. Amy Klobuchar (D-Minn.), a candidate for the Democrat presidential nomination, released a letter she wrote to Perdue, asking him to explain why the department hasn’t been publicizing its climate research. She also asked: “What actions has the agency taken to empower farmers, ranchers, and rural communities to plan for the consequences of climate change?”

One anonymous USDA researcher told Bottemiller that “you can only postpone reality for so long.” The reality of climate change is already asserting itself in a key region for food production.