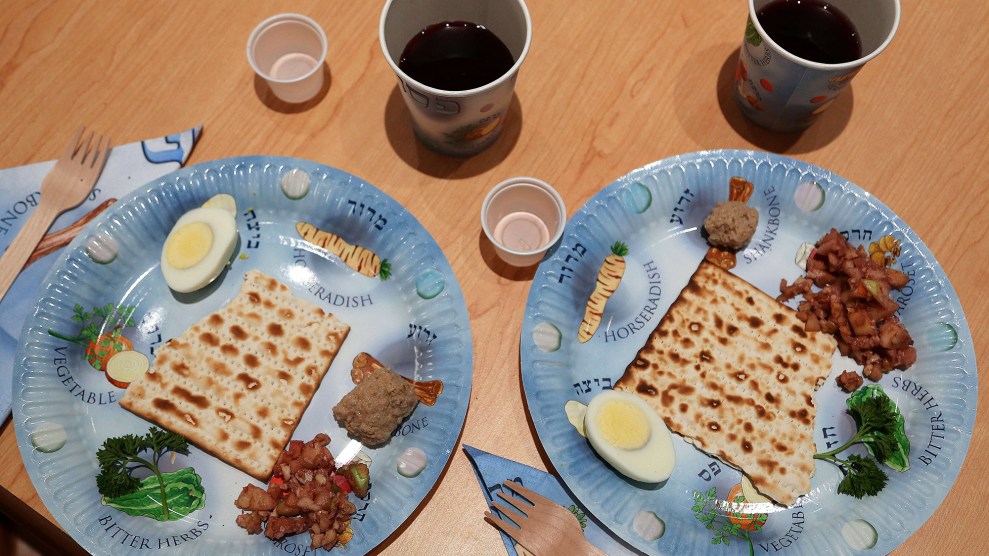 On a recent Friday evening just north of San Francisco, I sat with more than 60 people at long tables covered with white tablecloths in a barebones chapel room. We were there to celebrate Passover; to read the Haggadah, the holiday’s central story; and to eat the symbolic seder meal meant to represent each part of the journey that Jews took from slavery to freedom. It could have been your typical Passover seder—except for a few things. People poured each other Welch’s grape juice instead of wine, and the only cutlery we were given were plastic forks. That’s because this seder took place in San Quentin State Prison.

Rabbi Paul Shleffar, the Jewish chaplain at the prison, has celebrated Passover with the men inside every year since he started working at San Quentin in 2015. The annual event is a collaboration between San Quentin’s Shleffar and members of a local congregation, Rodef Sholom. This year, they served about 180 holiday meals to the incarcerated men at the service and those on death row and in solitary confinement who couldn’t attend in person. Tune in to my dispatch from the night on this week’s episode of the Bite podcast:

During the two-hour affair, we took turns reading the Haggadah with frequent musical breaks between sections. A band made up of incarcerated men and volunteers played traditional Jewish songs and less conventional numbers like Bob Marley’s “Redemption Song.” After the service, we dug into food brought in from the nearby Wise Sons deli, a far cry from the usual prison fare.

But people weren’t just there to take advantage of the meal. Lloyd Payne, 29, has been incarcerated since he was 14 and has been practicing Judaism in prison for years. Before San Quentin, he’d never been in a prison that held services or had a rabbi, and he’d never been to a seder. “We got made fun of for being Jewish, and for eating a certain way and practicing a certain life,” he said. This year he could relax a little more and just enjoy the holiday. He has his own read on the Passover allegory: “It’s Egypt always representing ignorance, and you crossin’ over from the ignorance into wisdom, of the darkness to light,” Payne said. “That’s what it’s really about for me—the times that I’ve been ignorant until I come into a new body of knowledge to practice wisdom.”

Payne will finally be released this year on Christmas Day. He’s acutely aware of the themes of freedom and captivity that are front and center during Passover. “To celebrate the holiday is nice,” Payne said. But “the concept of liberty, we far from it. In bondage or out of bondage, we so far off from liberty that I just laugh at it.”

He feels buoyed, though, when volunteers from the outside community come in to spend time with him and the other incarcerated men. “That means more to me than the actual celebration of the holiday,” he said. “When you guys come here, you show us that you actually care. That means more to me.”