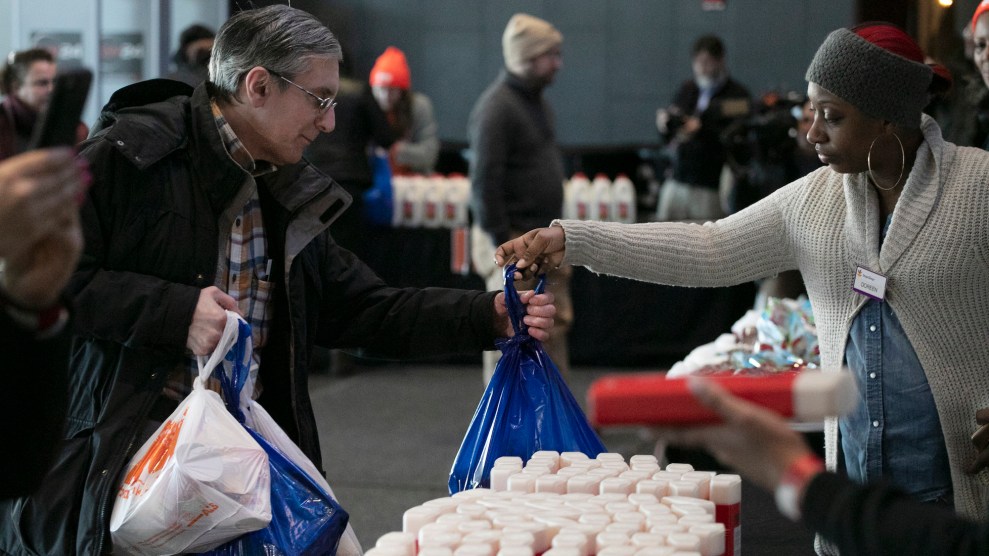 January is usually a relatively quiet month for the Austin-based Central Texas Food Bank—a time to restock supplies drawn down during the busy Christmas season, says Derrick Chubbs, the organization’s president and CEO. But this year, after federal employees missed their first paycheck of the government shutdown in early January, calls for assistance began to ramp up.

Food banks—from Chicago to Washington, DC, from California to Florida to New York City—are reporting jumps in demand for their services from furloughed federal workers, whose numbers hover around 800,000 nationwide.

There are around 26,000 furloughed employees in the 21-county region covered by the Central Texas Food Bank. Last week, the organization staged a special food distribution for these workers and their families at the bank’s central location in Austin. It plans to rotate sites within the area until the shutdown ends. This week’s will take place near Fort Hood, a massive US Army base 60 miles north of Austin. Chubbs expects to send two truckloads of food there; while military personnel aren’t affected by the shutdown, major bases like Fort Hood employee thousands of contractors and civilian workers, most of whom are furloughed or working without pay.

“We fall about 30 percent short of the demand” during normal times, says the president of a Texas food bank.

That haul represents resources that otherwise would have gone to the area’s large population of families who regularly struggle to put meals on the table, Chubbs says. With its booming tech industry and red-hot real estate market, Austin has a reputation as a prosperous city. But the high cost of living puts a hard squeeze on the region’s low-income service workers. “Austin probably appears on just about every top 10 list imaginable, but there is also a growing hunger challenge right here in central Texas,” Chubbs says. A 2016 study from the University of Texas’ Lyndon B. Johnson School of Public Affairs found that 25 percent of Austin residents live in “food-insecure” households. On average, the bank and its partner organizations serve 46,000 central Texans every week—and “we fall about 30 percent short of the demand” during normal times, Chubbs says.

Chubbs and his team are also bracing for another shutdown-related shock to the system: disruptions to the Supplemental Nutrition Assistance Program, formerly called food stamps. SNAP serves 39 million people nationwide, nearly two-thirds of whom are children, elderly, or have disabilities. In Travis County alone—which encompasses Austin—more than 100,000 people rely on SNAP benefits. While the shutdown and the lack of a spending bill technically zero out SNAP’s budget, the Trump administration tapped an obscure provision in the previous spending bill to fund the program through February. To make it work, though, the administration released February funds to most SNAP recipients on January 20, more than a week earlier than the usual end-of-the-month time frame.

The stopgap measure was crucial to maintaining February SNAP benefits, but it raised two problems. For one, it does nothing to ensure funding for the program in March, which will have no budget if the shutdown lasts that long. So far, the administration has revealed no contingency plan to fund SNAP after February.

“The much longer than usual gap…will cause some households whose budgets already are extremely tight to face heightened difficulties affording food.”

And even if the shutdown ends or more funding to continue the program emerges, the early disbursement on January 20 means most recipients will have to wait an unusually long time—about 5 weeks—before their next payment at the end of February. Nationwide, “about 15 million households, which include about 30 million people, could experience a gap between monthly SNAP payments of more than 40 days,” the Center on Budget and Policy Priorities found in a new report. “Even if the shutdown is resolved in time for the government to provide full March SNAP benefits on time, the much longer than usual gap between benefit receipt for February and March will cause some households whose budgets already are extremely tight to face heightened difficulties affording food, as they await their March benefits.”

That makes Chubbs nervous. “When we have conversations with our clients who are participating in SNAP, one of the things they tell us is that the benefits are only enough to last for about three weeks,” Chubbs says. Usually the food bank tries to “bridge the gap during that fourth week, until the next time they’re able to get their benefits.” Now, many recipients are facing an extra week without another infusion of SNAP funds, putting yet more pressure on the Central Texas Food Bank’s resources.

These twin burdens—uncertainties around SNAP and the emergence of hundreds of thousands of federal workers living without pay—will inevitably result in a squeeze on food-aid resources and a jump in people going hungry. “If this goes into March, it’s going to be extraordinarily difficult,” Chubbs says. “I’ll tell you right now, we can’t meet that demand.”