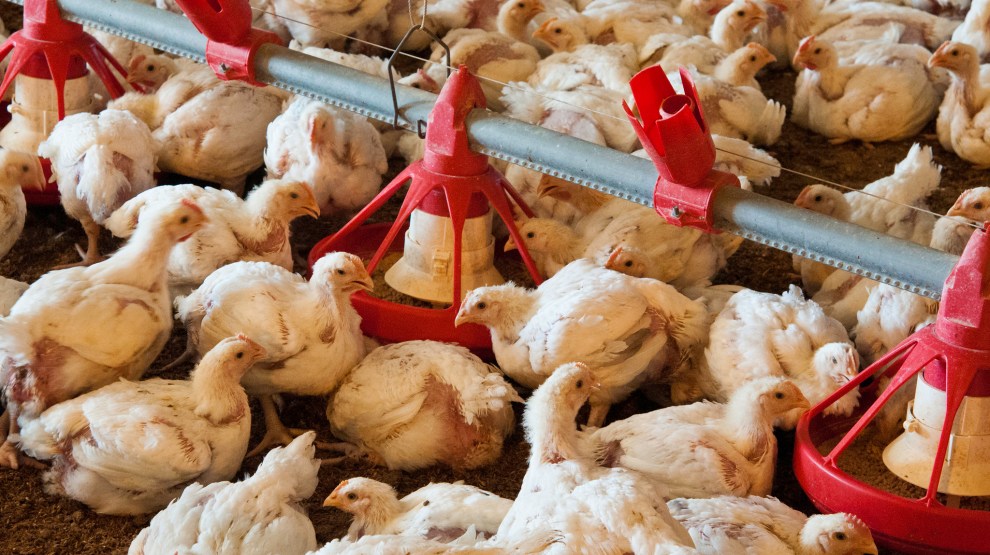 Rosemary Partridge has lived in Sac County, Iowa, for 40 years. She has watched the state’s agricultural landscape change, with large-scale hog farms taking over nearly all the land surrounding her home. The stink of the neighboring farms is “unbearable,” making her nauseous whenever she is outside. She and her husband, once cattle and crop farmers who now plant their land with native grasses, suffer health problems—including her husband’s chronic obstructive pulmonary disease—that they worry are a result of the pollution their neighbors are pumping into the air.

Eleven hundred miles to the east, Lisa Inzerillo wonders how much longer she and her husband can tolerate living across the street from six chicken barns, one of the many concentrated animal farming operations (CAFOs) that make the area the poultry production epicenter of Maryland’s Delmarva peninsula. She says she suffers chronic allergies and her husband has had several bouts of bronchitis since the chicken farm moved in about three years ago. “At night, you see the dust from these fans,” she says. “That’s fecal matter, that’s feathers, god knows what else. And if you’re seeing it, you’re breathing it.”

“If you’re seeing it, you’re breathing it.”

The two families are united by the experience of living near large-scale livestock operations: unable to use their porch or land on certain days, keeping windows closed, and worrying constantly about long-term health consequences. Until recently, though, they could at least be assured that in the case of a major emission of hazardous waste, farm operators would be required by law to notify state and federal responders.

But recent actions by the GOP-controlled Congress and the Trump administration have exempted big livestock farms from reporting air emissions. The moves follow a decade-long push by the livestock industry for exemption and leave neighbors of large-scale operations in the dark about what they’re inhaling. If that weren’t enough, environmental advocates warn that the failure to monitor those emissions makes it even harder to assess the climate effects of large-scale agriculture.

Carrie Apfel, an attorney for Earthjustice who is leading a lawsuit against the Environmental Protection Agency by a coalition of environmental and animal-welfare organizations, says the exemption indicates “further denial of the impact that these [emissions] are having, whether it’s on climate or whether it’s on public health.”

The EPA declined a request for comment on the consequences of CAFO emissions for human health or the environment.

Dozens of farm workers have died after being exposed.

The two laws in question, the Comprehensive Environmental Response, Compensation and Liability Act (CERCLA) and the Emergency Planning and Community Right-to-Know Act (EPCRA), required farms to notify national and local emergency response committees, respectively, in the case of spills, leaks, or other discharge of hazardous waste. That included farm waste products like ammonia and hydrogen sulfide over a “reportable quantity” of 100 pounds. Most farms don’t meet that reporting standard, but large-scale livestock operations commonly do, according to researchers from the University of Iowa.

But in March, Congress added the Fair Agricultural Reporting Method (FARM) Act, which exempts farms from reporting air emissions under CERCLA, to its appropriations bill. And in November, Trump’s EPA issued proposed rules to exempt those same operations from air emissions reporting under the EPCRA. The agency’s public-comment period on the new rules ended December 14.

In response, a coalition of national and local advocacy groups—including Food & Water Watch, the Humane Society, Animal Legal Defense Fund, and North Carolina’s Rural Empowerment Association for Community Help—is suing the EPA. Advocates say these exemptions only serve the biggest farms and endanger community health and the environment. The EPA requested to stay the litigation for six months on November 29. The US district court in Washington, D.C., has yet to rule on the motion.

These latest moves to exempt farms from reporting requirements follow a decade of push and pull between the livestock industry and community advocates. In 2008, at the tail end of the second Bush administration, the EPA issued its first EPCRA and CERCLA reporting exemption for farms. The exemption had been prompted by lobbying from the National Chicken Council, the National Turkey Federation, and the US Poultry & Egg Association.

At the time, the EPA defended its decision by saying that “reports are unnecessary because, in most cases, a federal response is impractical and unlikely.” But the exemption was overturned by the court of appeals for the District of Columbia in April 2017, which said that “reports aren’t nearly as useless as the EPA makes them out to be.”

The livestock industry and its Republican supporters in Congress urged EPA to challenge the court’s ruling. Several industry groups, including the US Poultry & Egg Association, National Pork Producers Council, American Farm Bureau Federation, and National Cattlemen’s Beef Association met with EPA leaders in July 2018. But rather than challenge the court’s decision, the EPA turned to its own rulemaking process to create a local reporting exemption that dovetailed with the FARM Act’s national reporting exemption.

The exemptions have ties to Big Ag, too. The FARM Act was introduced by Nebraska Sen. Deb Fischer in February and supported by the livestock industry. Sen. Fischer received more than $230,000 from agribusiness PACs in 2017 and 2018.

These exemptions come as scientists, citizens and even the EPA’s own researchers express concern about the environmental and human-health effects of emissions from large-scale livestock farms. A September 2017 report from the EPA’s Office of the Inspector General said that the agency had not found a reliable method for tracking emissions from animal farms or of ascertaining whether the farms comply with the Clean Air Act. A recent report from the World Resources Institute lists reducing air emissions from livestock farming as a major step in addressing climate change.

“There’s no reason that an industry should drive us off our land.”

People who live near these large livestock operations have reason to worry that their health is at risk. The major chemicals being emitted are ammonia and hydrogen sulfide, which can interact with other air pollutants to reduce air quality. Animal farms are responsible for more than 70 percent of the ammonia emissions in the US. Chronic exposure to the levels of these chemicals that come from big farms can lead to a range of health problems, according to researchers from the University of Iowa, from headaches and nausea to respiratory damage. More than 100 farm workers have died after being exposed to high amounts of hydrogen sulfide in manure lagoons or elsewhere on large-scale farms.

In the absence of detailed federal monitoring, some communities rely on citizen scientists to monitor waterways and air for toxic emissions. In Iowa, Rosemary Partridge once tested local water for nitrates with Iowa’s IOWATER program, which trained residents to do basic water monitoring. But those local programs are also vulnerable—Iowa’s Department of Natural Resources ended IOWATER in 2016 after several years of underfunding.

Partridge says the stakes of not monitoring farm waste are clear. “[This] should be of monumental interest to everyone,” she says. “These are major greenhouse gases. People don’t even know about it,” she says, referring to other emissions from animal agriculture like methane.

Both Partridge and the Inzerillos in Maryland have weighed whether to stay on their family land or move away. Partridge says she and her husband decided against uprooting their lives. “We’re going to stay here until we can’t anymore,” she says. “We love our land. There’s no reason that an industry should drive us off our land.”

Lisa Inzerillo says she and her husband would like to leave but aren’t yet ready to walk away from land that once belonged to her grandparents. “It was a dream place for us,” she says. “But living long term there, I just don’t know.”