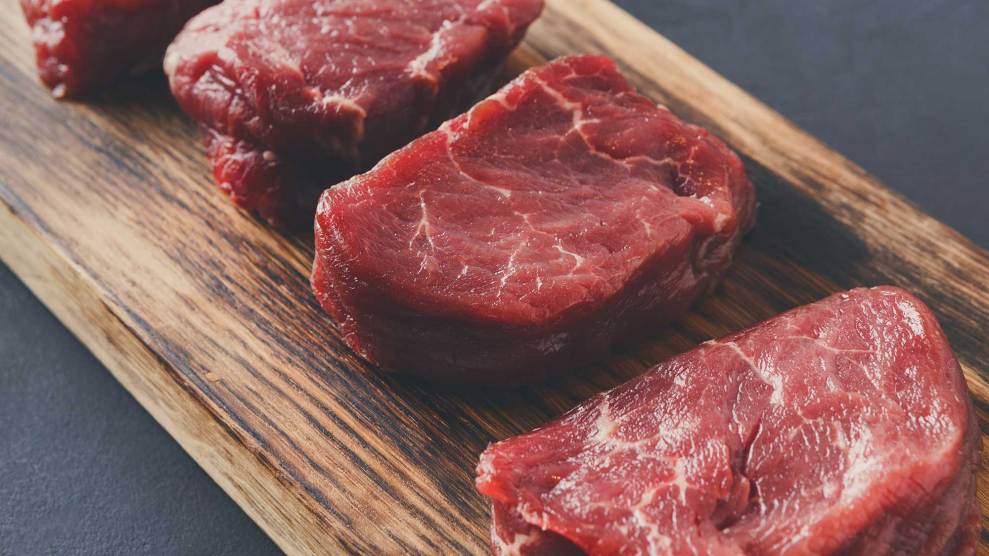 This summer, Canadian psychologist and alt-right darling Jordan Peterson appeared on Joe Rogan’s podcast to talk about his new health regimen: “I’ve been on a pure carnivore diet for about two months,” Peterson said. First he had gone low-carb, eating only meat and greens, but then he nixed the greens altogether. Peterson drew inspiration from his daughter, Mikhaila Peterson, who claims that eating nothing but beef, salt, and water for eight months helped her overcome her struggles with arthritis and depression. (She now advertises $75 half-hour Skype consultations about the extreme elimination diet.) She detailed her daily intake in an April interview posted to YouTube:

Ribeye is generally what I like the best. It’s really fast in the morning, so I’ll fry one of those. I could just eat ribeye all the time, but it’s expensive. So we have ribs, hamburger, roasts, and then I make jerky on Saturdays so I have something easy to grab all the time.

The Petersons embrace “carnivorism,” as it’s come to be known, for health reasons, as does “carnivore king” Shawn Baker, a former orthopedic surgeon and head of the World Carnivore Tribe Facebook group. But some conservatives, many of them inspired by the Petersons, have taken up all-meat diets for a different purpose: to piss off liberals. “Meat is poised to be the next proxy battleground in a left-right culture war,” wrote Daily Beast reporter Kelly Weill in a recent piece on the trend.

Weill joined Mother Jones‘ Kari Sonde on the Bite podcast to talk more about the trend:

After researching carnivorism online and in Facebook groups, Weill observed that many of the people espousing the diet were those that were drawn to other right-leaning fringe ideologies, who lacked a sense of community and were “looking for that place where they belong.” Then there are those that try and connect the diet to ideals of primitive, masculine strength—”They’ll compare themselves to like, cavemen, or predator animals, like wolves,” Weill said. Why would an all-meat lifestyle appeal especially to conservatives? Weill had some theories:

A lot of conservatives are very worried about losing their status as a white person or losing economic status. And I think there’s maybe a similar current with practitioners of this diet—really feeling like, ‘Somebody’s going to take away my meat.’ It’s symbolic to them; it’s an element of their masculinity and their identity.

The fad echoes past efforts by right-wingers to eschew left-leaning issues: They’ve amassed straws in response to environmental concerns about plastics in the oceans; boycotted tofu out of fear of soy’s supposed emasculating phytoestrogen content; and of course, there was “rolling coal“—tricking out trucks to release billows of black smoke to make Prius-driving liberals angry. “You have constructed this worldview around how to upset people,” noted Weill. “I’d really like to know how someone feels having gone through all that trouble—what was your gain in the end?”