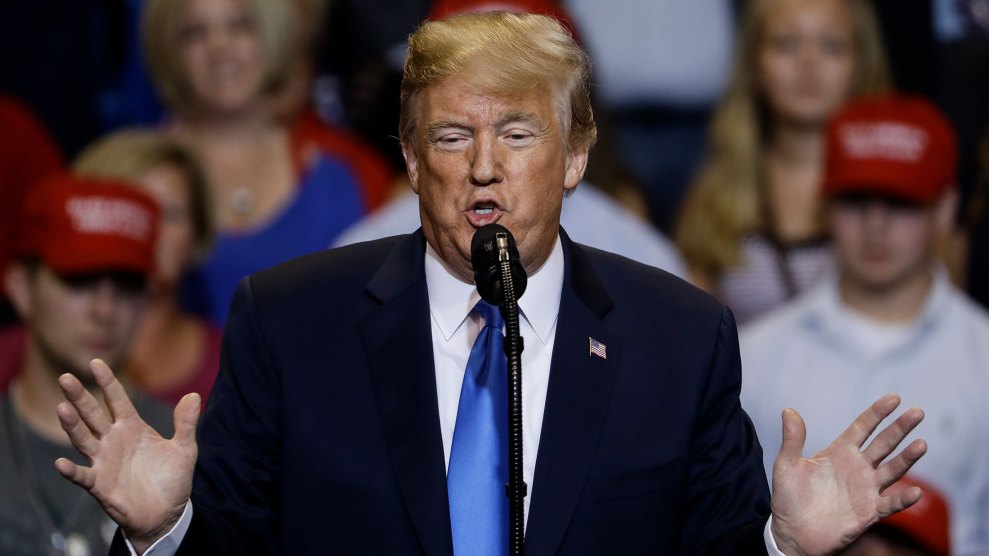 President Donald Trump’s decision to impose tariffs on $200 billion worth of imported Chinese goods has been widely unpopular. Even so, on Wednesday, Trump decided to up the ante: He ordered his administration to consider raising the rate from 10 percent to 25 percent.

The response from China didn’t take long. “The blackmailing and pressure by the US will never work on China if the US take[s] measures to further escalate the situation we will surely take countermeasures to firmly uphold our legitimate rights and interests,” the country’s foreign ministry spokesman said at a press briefing that day. Sure enough, by Friday, China announced it would tax $60 billion a year worth of US imports if Trump made good on his promise.

On Saturday, Trump took to Twitter to brag about the levies:

Tariffs are working far better than anyone ever anticipated. China market has dropped 27% in last 4months, and they are talking to us. Our market is stronger than ever, and will go up dramatically when these horrible Trade Deals are successfully renegotiated. America First…….

….Tariffs have had a tremendous positive impact on our Steel Industry. Plants are opening all over the U.S., Steelworkers are working again, and big dollars are flowing into our Treasury. Other countries use Tariffs against, but when we use them, foolish people scream!

….Tariffs will make our country much richer than it is today. Only fools would disagree. We are using them to negotiate fair trade deals and, if countries are still unwilling to negotiate, they will pay us vast sums of money in the form of Tariffs. We win either way……

Lawmakers on both sides of the aisle have expressed concern about an escalating trade war with China. A top Federal Reserve official warned two weeks ago that the conflict could hurt the US economy, Reuters reported. “Business groups have alleged that the trade threats lobbed by both countries are hurting consumers and businesses but doing little to address the root causes of the imbalance, particularly as both countries have halted formal discussions,” the Washington Post reports.

Farmers across the country—especially those harvesting large-scale commodities like soybeans, pork, corn, and almonds—worry that the tariffs could upend their industries. A White House plan that would send $12 billion in subsidies their way was met with protest, even from groups funded by the conservative American Farm Bureau. “Crops don’t grow overnight,” stated Farmers for Free Trade. “Farmers and producers need time and long-term certainty to do their jobs, not constant chaos created by haphazard trade policy.”

The chaos promises to make its way into the upcoming midterm elections. “Trump’s trade war becoming a hot potato for California House Republicans,” read the headline of a San Francisco Chronicle story from earlier this week.

Several of the most competitive House face-offs will occur in the state’s agriculture-heavy counties: California Republicans Rep. Jeff Denham and Rep. David Valadao both land on the Cook Political Report’s list of most competitive races.

From what we know so far, Trump’s $12 billion in subsidies—his attempt to make up for farmer losses from the trade war—would not cover almond or citrus farmers. As my colleague Tom Philpott pointed out, two-thirds of California’s $5 billion almond crop go to foreign markets, and China is the second-leading destination. The situation could lead to a growing swarm of angry voters that could sting vulnerable GOP candidates in California come November. “There is a point in this tariff war where the damage cannot be undone,” Elaine Trevino, president of the Almond Alliance of California, told the Chronicle.