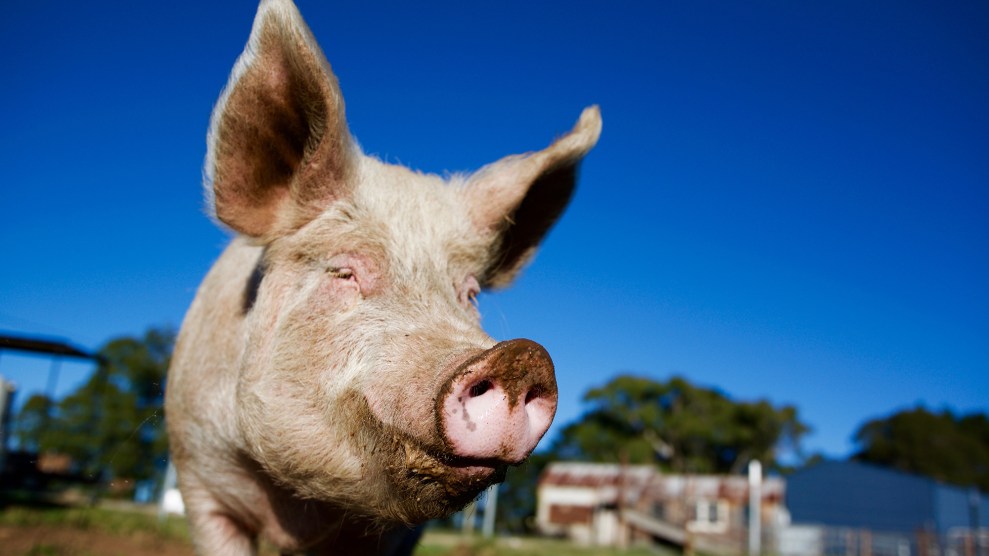 Jonathan Safran Foer is probably best known for his novels Everything Is Illuminated and Extremely Loud & Incredibly Close, which is set in New York shortly after 9/11. But in the late 2000s, he took a break from fiction. As he prepared to become a father, Foer was irked by the idea of eating meat—how would he explain or justify killing creatures to his future kids? The question became a book, Eating Animals. Then the book became a bestseller. And this year, a documentary—narrated by the actress and vegan activist Natalie Portman.

Foer makes a persuasive case: Eating 222 pounds of meat a year, as each American does on average, is an enormous drain on our resources, the environment, and human welfare. “People agonize over whether to get a Prius or not, when that choice is relatively irrelevant compared to the eating choices that we make,” Foer argued on our latest episode of Bite. Hear the full interview here:

Mother Jones: In your book Eating Animals, you write that your decision to stop eating meat came about in part because you started studying philosophy and then a few years later you chose to mostly become a vegetarian. Why not stop there with that personal decision? What compelled you to write an entire book about it and then go even further to write and produce a documentary?

Jonathan Safran Foer: The truth is, I was an on-and-off vegetarian. I first became one when I was nine and it was because I had a babysitter who was a vegetarian and I was, like most nine-year-olds, really impressionable. I found her logic just really impossible to refute. As it turns out, I find it impossible to refute three decades later. But everything she said made sense and also it was in keeping with the culture of my family. We had pets who we were taught to treat a certain way. I read stories with know bedtime stories with animals as heroes and outside of the world of animals we were taught not to litter. We were taught to be kind, conscientious. And then there was this other thing that we did, eating meat, which seemed to me as a nine-year-old to be antithetical to all of these other stories that we were telling about what it is to be a good person.

It was actually when I faced the prospect of becoming a dad and having to make choices on someone else’s behalf that I started to take it a little bit more seriously and my way of taking it something seriously is to write about it.

MJ: So you have two kids now. I’m curious what kind of questions they ask you about eating meat.

JSF: They ask no questions, really. I mean you know if you can remember what it was like to be a kid, not eating meat doesn’t require an explanation. It’s just so commonsensical. Why the hell would I murder and dismember an animal and eat its insides? It’s violent, it’s disgusting. This is nothing in the world to do with whether it’s right or wrong.

So my kids have never found it at all complicated why they wouldn’t eat meat. At some point when they’re a little bit older, probably, they will find it complicated. Maybe even quite soon. And they might very well reach different conclusions than I do. Either to eat meat or maybe even not to eat things that I eat—and I’m not too worried about that.

You know my goal is not to create little ethical replicas of myself but to empower two children both with knowledge and also with a self-respect or dignity to make choices even when they aren’t in keeping with the choices of others around them.

MJ: After Eating Animals was published, did you notice anything different about how your friends approached dinner parties? Did anyone stop inviting you over?

JSF: No one invited me over to begin with [laughs]. I go to like one dinner party a year. I’m just a homebody.

At every reading I’ve done since the book has come out, whether it was for that book or for a novel, I always get at least one person who comes up and says ‘I became a vegetarian because I read that book.’ And yet, I have a really good friend who is a writer, who is himself an environmentalist in a pretty explicit way.  And he said to me, ‘I’m just I’m afraid of reading your book. I haven’t read it. I’m not going to read it.’ I respect somebody who says: ‘I read it, I just disagree—I don’t really think animals feel in the ways that you’re describing.’ Okay, I get it. Or they say, ‘Yeah, the environmental case that you make isn’t persuasive to me for this this and this reason.’ I can respect that.

I respect people who say: ‘I agree with everything, I just find it too hard.’ I really get that. I’m not a vegan for exactly that reason.

MJ: You wrote the book back in 2009, but the documentary is just coming out now. I’m curious about whether engaging people on this question of eating animals has been different since Donald Trump won the presidential election. Sometimes it feels like there are so many crazy things going on that when you start to bring up food choices, people roll their eyes. But in other ways, this is a question that relates to how our society operates, and where we put resources, and morality. So I wonder if there has been any shift.

“It’s not the case that everybody has to become vegan or vegetarian. We just do need to reduce the amount of meat that we eat and we need to eat it from better sources when we eat it.”

I think people who care about these things need to care where it matters rather than where it feels good to care. People agonize over whether to get a Prius or not, when that choice is like relatively irrelevant compared to the eating choices that we make. It just doesn’t matter.

The happy news is we don’t need Trump for this one. So many of the problems in the world right now we need governmental solutions, or we need to somehow come up with hundreds of billions or trillions of dollars. But this is a problem where all we have to do is eat differently as individuals and not in some kind of radical way. We need to eat like our parents and our grandparents ate. It’s not the case that everybody has to become vegan or vegetarian. We just do need to reduce the amount of meat that we eat and we need to eat it from better sources when we eat it. Then we can bypass Trump and we can bypass government altogether in solving these problems and we can feel good doing it. And be healthier doing it.

Have you cut meat out of your diet? Tell us why.