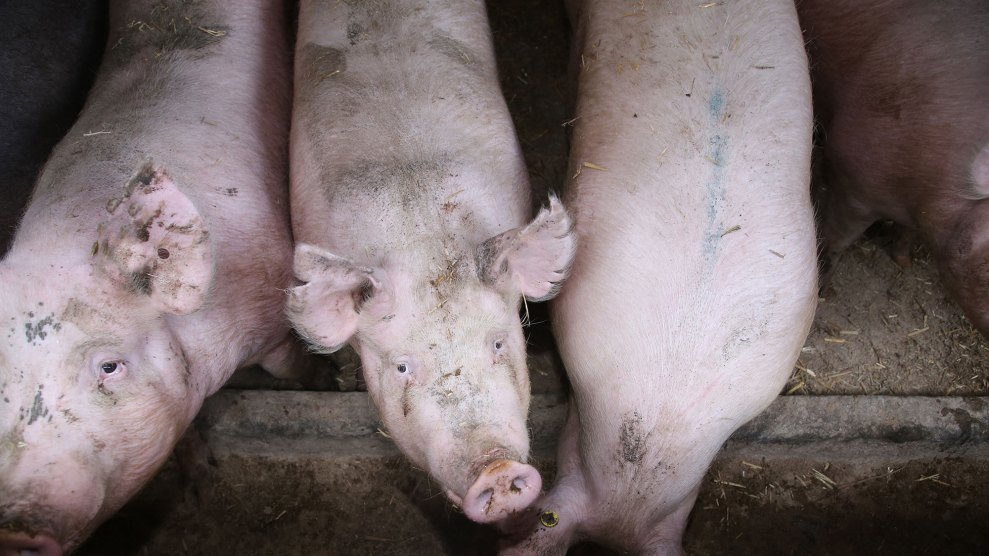 The $50-million verdict last week against North Carolina hog producer Murphy-Brown is being hailed as a major new victory in the growing grassroots opposition to industrial farming operations around the country. Murphy-Brown is owned by Smithfield, the country’s largest pork producer.

The 10 plaintiffs, residents of Bladen County, North Carolina, had argued in federal court that the company’s poor management of its hog farms, and particularly of hog manure, was exposing them to health risks and reduced quality of life.

“Finally, somebody heard what the people were saying was happening to them,” says Naeema Muhammad, co-director of the North Carolina Environmental Justice Network, of the verdict. “For two decades we’ve been working on this,” she says, and plaintiffs in this and other cases against Murphy-Brown have been “telling their stories over and over and over to the point of weariness, feeling like it’s not making a difference.” The jury’s verdict is a “victory,” Muhammad says, because the “industry is being made to pay for the damages that they’ve done to people.”

People of color are 1.5 times more likely to live near a hog CAFO than white people.

In their 2014 complaint, the plaintiffs argued that Murphy-Brown had “failed to take adequate steps to manage the number of hogs at the sites or dispose of the millions of gallons of manure that come from the hogs.” Open-air lagoons provided little protection for neighbors from noxious odors, and the farm operators sprayed urine and feces into the air, which would then drift to neighbors’ properties and expose them to health risks. The hogs brought flies and other insects in swarms to neighbors’ homes, making outdoor recreation impossible, plaintiffs said. One farm in the county housed over 14,000 hogs when the case began.

The jury found that Murphy-Brown “substantially and unreasonably [interfered] with the plaintiff’s use and enjoyment of his or her property.” They awarded each plaintiff $75,000 in compensatory damages and $5 million in punitive damages, though state law capping punitive damages may lower the overall compensation.

Nuisance suits have often been used by neighbors of confined animal feeding operations (CAFOs) to challenge negligent management, but a spate of state laws have made it much harder for farm neighbors to bring those types of cases. In 2017, after a cumulative 26 lawsuits from over 500 residents had been brought against Smithfield, North Carolina passed an expansion of the state’s right-to-farm law that restricts farm neighbors to suing only for loss of property value, not for a loss in quality of life as a result of living near a CAFO. Similar right-to-farm expansions have been passed in Missouri, Arkansas, Indiana, Iowa, and other agricultural states.

Danielle Diamond, executive director of the Socially Responsible Agricultural Project, says that such legislative changes are in part a reaction to growing community pushback to industry farming across the country. She says these are “common tactics that the industry is using to pass these types of laws to make it harder for people to assert their rights.”

But the growing visibility of cases like the one in Bladen County is raising awareness in the general public about the health and environmental impacts of industrial farming, Diamond says. “People are waking up to the way that this industry externalizes its costs onto surrounding communities,” she notes.

The communities surrounding CAFOs are disproportionately lower income communities of color. One study in North Carolina found that people of color are 1.5 times more likely to live near a hog CAFO than white people. Most of the 500 residents involved lawsuits against Smithfield in North Carolina are black, as are all 10 of the plaintiffs in the Bladen County case.

“People are waking up to the way that this industry externalizes its costs onto surrounding communities,” notes Danielle Diamond, executive director of the Socially Responsible Agricultural Project.

The plaintiffs in the Murphy-Brown case chose not to target the farmer, but rather the farmer’s employer. Murphy-Brown’s owner, Smithfield, is owned by WH Group, a Chinese company that is the largest pork company in the world. WH Group acquired Smithfield in 2013, and Smithfield acquired Murphy-Brown in 2000.

The hog industry has followed the broader trend of consolidation in agriculture, and today just four hog processors control over 60 percent of the sector. Hog farmers are also following the trend of poultry farmers toward contract-based growing. That means that processors, such as Smithfield, own the animals, feed, trucks, and other inputs, while the farmers own the waste and capital-intensive farm structures required for hog farming. Contract poultry farmers have spoken out against the abuses of the contract system for years and have warned other livestock farmers of the dangers of the system.

Muhammad says that she hopes this verdict could also inspire contract hog farmers to begin speaking out about the ills of industrial farming. “The industry has managed to drive a wedge between the communities and the growers,” she says, “by saying the communities want to shut them down, put them out of business. In the two decades we’ve been doing this work we’ve never advocated for shutting anybody down. We’ve said clean up your mess.”

Hog production has expanded dramatically in North Carolina in recent years. According to plaintiffs’ complaint, the number of hogs in the state spiked from 5 million in 1990 to 15 million in 1995. The eastern part of the state, where Bladen County is located, today houses 9 million hogs and just 1 million people. All those hogs produce about 15.5 million tons of manure each year. North Carolina is the second-largest hog producing state in the country after Iowa.

In a statement, Smithfield said it was “extremely disappointed by the verdict,” and pledged to appeal. “These lawsuits are an outrageous attack on animal agriculture, rural North Carolina and thousands of independent family farmers who own and operate contract farms,” the statement said.

The next of the 26 lawsuits is set to go to trial next month.