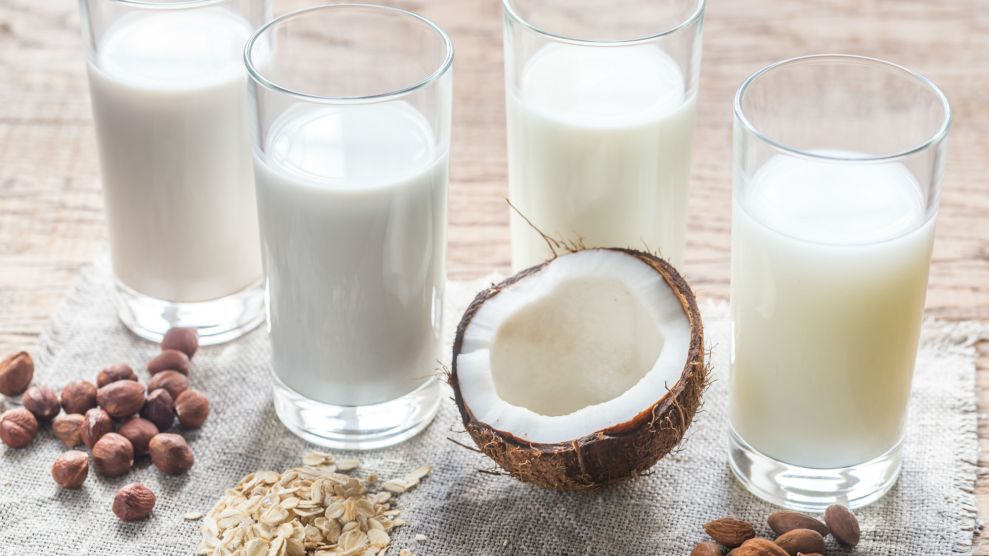 Earlier this year, I fact-checked Tom Philpott’s column about how demand for oat milk from trendsetting millennials could spur an agricultural revolution.

As one of Mother Jones’ resident millennials, it got me thinking: Are any of these milks actually tasty enough to drink?

So, I tracked down a dozen other equally curious San Franciscans and poured the entirety of the Whole Foods alternative milk selection, plus the brand of oat milk Tom mentioned in his column, into 144 shot-sized red solo cups. We called it the Great Plant-Based Milk Showdown of 2018, and you can hear all about it on this week’s episode of Mother Jones‘ food politics podcast, Bite:

I bought all original or non-sweetened flavors. Prices below are based on the price of the milk at San Francisco’s Whole Foods locations.

Pacific’s oat beverage was the highest-ranked plant-based milk of the group. Its yellowish color “wasn’t great” one taster remarked, but another added she would pour it over her cereal and into her coffee and even drink it on its own.

Pea milk sounded gross and tasted…gross. “Tastes like snap pea crisps—but unpleasant,” one of my guests concluded. “I’m never drinking that again,” said another. Its sole redeeming quality, argued a third, is that it did taste somewhat like a glass of skim milk, which we Bay Area millennials regularly had to drink growing up. Perhaps it would have been better if we’d tried the chocolate variety?

Almond milk, the tasters concluded, was like the oat milks in flavor and texture—but decidedly less delicious. It was “watery” and “not sweet” but otherwise “inoffensive,” one said.

The macadamia nut milk could have been creamier, given its rich source, but nevertheless garnered decent reviews. “Nutty, sweet, more like skim milk consistency,” one taster said. But few thought it was worth its hefty price tag—nearly double some of the other milks.

Tasters said the hazelnut beverage reminded them of Nutella. It even had a pleasant smell. One taster took the carton home and said she enjoyed it in her morning coffee for a week. It’s unfortunately pretty high in sugar—14 grams per cup.

The rice milk was pretty bland and watery. One taster compared its taste to toothpaste. Another left this parting thought: “Not actually bad, but doesn’t taste like milk. Or food.”

The coconut milk reminded one taster of mango sticky rice. Another said she would drink it on its own. Its texture was a bit watery—and not comparable to milk fresh from a coconut.

Two of the 12 tasters ranked the hemp milk last. The texture was creamy. The taste was “earthy.” But specks of black particles floating in the beverage were off-putting. “Visually disturbing,” said one taster.

I thought the soy milk most resembled a cup of 2 percent milk. My tasters were largely indifferent. Could this be because it’s the most mainstream of all the plant milks? It was “grainy” and “sweet” and much creamier than many of the other alternatives. Tasters said they would pour it in cereal or put it in their coffee—but few said they would voluntarily drink it again on its own.

The flax milk was low in calories—just 25 per cup—and tasted like it. “Like cardboard. Or blended paper,” one taster said. “Not great,” added another.

I was excited about Forager’s cashew milk because I’ve seen the company’s dairy-free yogurts on shelves at my favorite San Francisco coffee spots. However, I was disappointed. The texture was chalky, and the aftertaste was grassy.

Tasters thought the Oatly oat milk was “creamy,” “fatty,” and “nutty” with a stellar aftertaste. I’ve concluded that Oatly’s beverage tastes a little less like watery oatmeal than Pacific’s, though I’ve happily enjoyed a glass of both on their own.