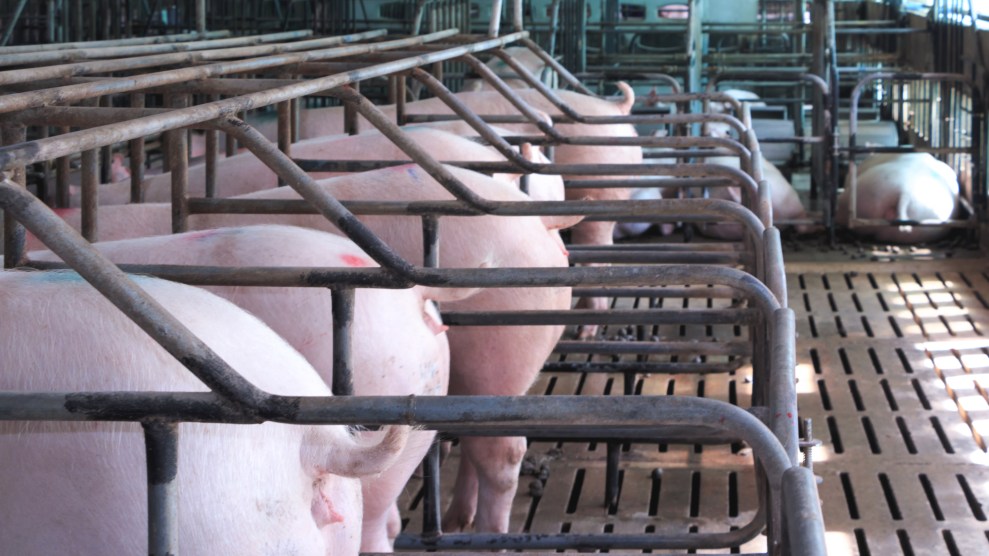 If you enjoy bacon or ham, chances are you’ve eaten pork from North Carolina, where about 16 million hogs—10 percent of the US total—are raised each year. The great bulk of that production takes place in a handful of counties on the state’s coastal plain—places like Baden County, home to more than 750,000 hogs but only 35,000 humans. Recently, a federal jury awarded more than $50 million in damages to 10 plaintiffs who live near one of the factory-scale hog operations.

The hog facility in the case, which raises hogs under contract for Murphy Brown, a subsidiary of China-owned pork giant Smithfield, is called Kinlaw Farm. Here’s a Google Earth image of it:

Those white buildings in three clumps of four are hog barns. A typical barn holds around 1,000 hogs. The brownish splotches are open-air cesspools known as lagoons, which store manure from all those animals before it’s sprayed on surrounding fields. I’ve been near operations like this, and the stench is blinding—pungent gases like ammonia and hydrogen sulfide permeate the air. In addition to revulsion, these gases can trigger ill health effects in neighboring communities, including eye irritation, chronic lung disease, and olfactory neuron loss.

As Leah Douglas recently noted in a Mother Jones piece, all 10 of the plaintiffs in the case are black. This isn’t surprising, because in North Carolina, “people of color are 1.5 times more likely to live near a hog CAFO than white people.”

If you play around with Google Earth, you can find several residences within a half-mile of the site. That’s not unusual—a recent analysis of satellite data by the Environmental Working Group found that around 160,000 North Carolinians, representing more than 60,000 households, live within a half-mile of a hog confinement or a manure pit.

The Bladen County case is the first of 26 lawsuits pending in North Carolina hog country—the next is due to begin trial this month. (Smithfield, meanwhile, has vowed to appeal last week’s court decision.) Will the legal onslaught force the industry to stop siting intensive high production so close to people’s homes? Iowa is the site of even more hog production than North Carolina, and people who live near facilities there have similar complaints.

If the federal court’s Bladen County decision withstands Smithfield’s appeal, “it could motivate the company to change its ways,” says Danielle Diamond, executive director of the Socially Responsible Agriculture Project. But she doesn’t anticipate broader changes in the industry, because “other courts are not required to follow this decision.” (The decision could, however, influence the 25 additional cases pending in the same federal district court that awarded the $50 million.)

Real change, Diamond says, won’t come until governments force the industry to clean up its act through tighter regulation. But “this industry in particular has incredible influence over all levels of government,” she says. North Carolina’s state legislature is notoriously cozy with Big Pork; and as the money-in-politics tracker Open Secrets notes, the meat lobby wields tremendous power in Washington.

Indeed, chatting with reporters last Monday, USDA chief Sonny Perdue aired his view on the North Carolina case: The ag secretary called the decision “despicable,” adding, “I feel certain that kind of award has to be overturned.”