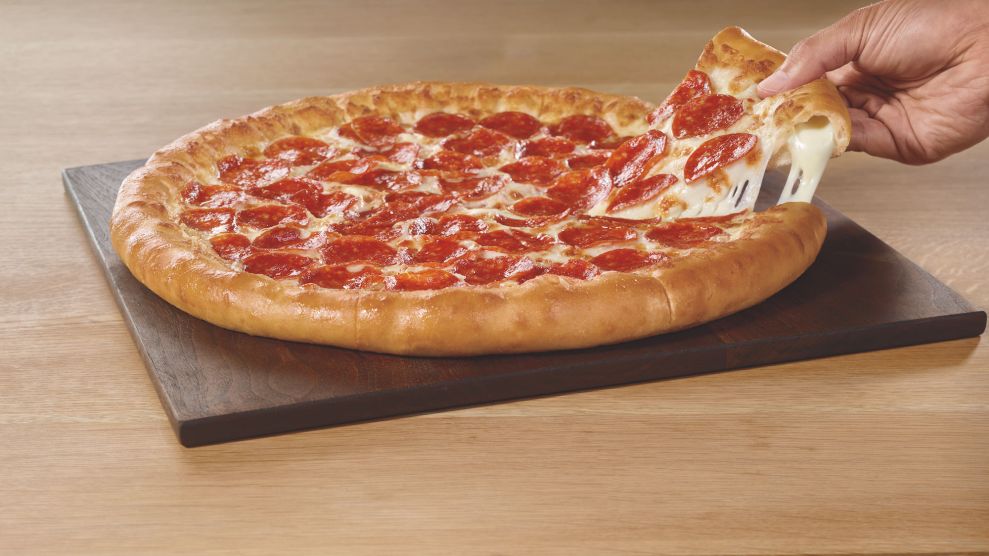 Remember “stuffed-crust” pizza? Donald Trump likely does. In this Pizza Hut ad from the 1990s, the future president demonstrates the “crust-first” method:

Cramming more cheese into products is a hoary and enduring fast-food tactic. Just last month, Pizza Hut announced it will soon be serving pies packed with 25 percent more of the gooey stuff—this time, presumably, without an endorsement from Trump. With splashy Super Bowl ads a couple of years ago, Taco Bell rolled out its “Quesalupa,” which it hailed as the “first shell stuffed with melted pepper jack cheese.” And back in 2010, Domino’s rejiggered its formula to deliver pizza with 40 percent more cheese.

The context for fast food’s fromage mania is a chronic dairy glut. In short, US dairy operations churn out way more product than either US consumers or the global market can bear. Overproduction has pushed prices so low that one milk-processing cooperative recently mailed its members a “chart showing the dismal 2018 milk prices forecast, and a list of suicide prevention hotlines,” NPR reports.

There is a way to ensure fair prices for US dairy farmers that doesn’t involve sneaking high-calorie goo into people’s diets.

So the government has tried to prop up producers by convincing everyone to eat more cheese. Dairy Management Inc., a marketing group overseen by the US Department of Agriculture, is the group that innovated the hide-the-glut-in-junk-food strategy. With a $228 million budget funded by a mandatory “checkoff” fee imposed on dairy farmers, the group spearheaded the development of all of the aforementioned cheese-centric products, working in partnership with fast-food giants.

Here’s how Bloomberg Businessweek described DMI in a 2016 piece:

For the past eight years, the group has been the hidden hand guiding most of fast food’s dairy hits—a kind of Illuminati of cheese—including and especially the Quesalupa. In 2012 it embedded food scientist Lisa McClintock with the Taco Bell product development team. She worked with the senior manager for product development, Steve Gomez, to develop a cheese filling that would stretch like taffy when heated, figured out how to mass-produce it, and helped invent some proprietary machinery along the way.

[DMI food scientist Nitin] Joshi said the project began in 2016 but needed to clear several hurdles throughout 2017 before it became a reality. DMI first shared research and insights to help convince Pizza Hut that consumers want more cheese on pizza. This led to a discussion of how much cheese to add to the chain’s existing pan pizza recipe that would make a noticeable difference with consumers. Then, there was the challenge of assuring the pizza would be cooked consistently across the country.

But here’s the thing. The US dairy glut has persevered despite these heroic efforts to cajole fast-food execs to inject evermore cheese into their offerings. Cheese consumption has indeed risen in recent years, but not nearly enough to offset a long-term trend among US consumers of drinking less milk.

There is a way to ensure fair prices for US dairy farmers that doesn’t involve sneaking high-calorie goo into people’s diets. The answer lies north of our border, in Canada, where dairy production is coordinated by production quotas that prevent farmers from either under- or overproducing. When there’s a glut and prices fall below production costs, farmers simply produce less, and prices ultimately rise. The program guarantees farmers get a price that covers their production costs, and slaps a high tariff on dairy imports to protect them from being undercut by foreign competition.

But rather than mimic Canada, the only US president in history to have served as a fast-food pitchman before taking office wants to subject Canada’a dairy farmers to the same market forces now driving their US counterparts to despair. Trump has made destroying our northern neighbor’s dairy supply management system, as it’s known, into a key part of his agenda for renegotiating the North American Free Trade Agreement.

So we can probably expect cheese to keep popping up in mind-boggling quantities, and in unexpected places, in fast food. Nacho fries, anyone?