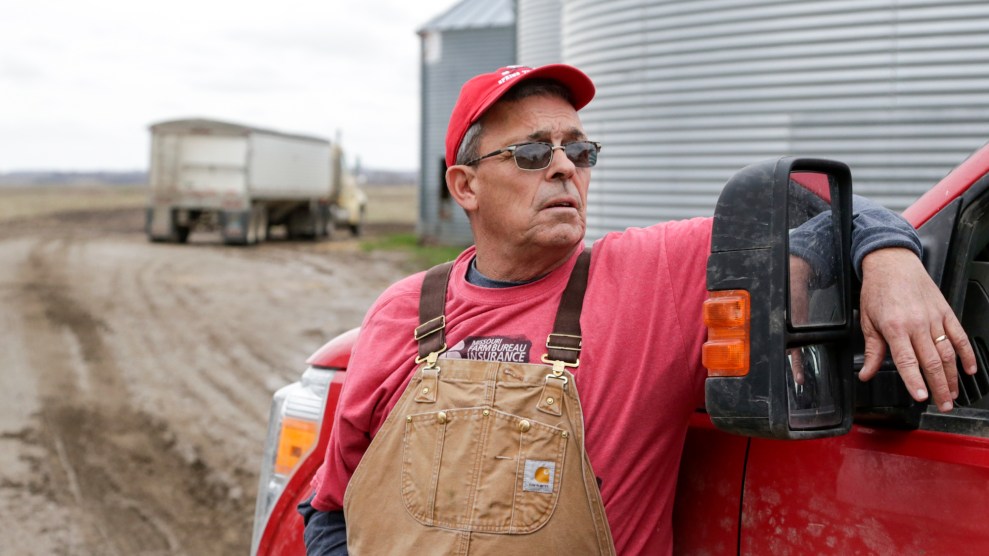 Blake Hurst, a corn and soybean farmer and president of the Missouri Farm Bureau.Nati Harnik/AP images

For a jet-setting Manhattanite, Donald Trump polled extremely well in 2016 among large-scale US farmers. But now the president’s heartland support will be tested by his increasingly aggressive trade stance with China, which buys about $25 billion in US-grown agricultural goods every year. Early Friday morning, news broke that China is considering tariffs on dozens of US products—including a 15 percent tariff on most US-grown nuts—in retaliation against Trump’s new levies on Chinese imports.

From the Midwest’s soybean fields to nut groves out West, US farmers look to absorb the bulk of the showdown’s fallout. That’s because cargo boats that arrive in US ports packed with Chinese-made smartphones and metals return in large part stuffed with US-grown food, including soybeans, pork, fruit, and nuts. Since we export around five times as much food to China as we import from the country, a US-China trade war won’t change much about the price of your food—if anything, the domestic gluts it could create might make items like meat and nuts a little cheaper here. In farm country, though, it’s a different story.

The trade scuffle started in early March, when the Trump team abruptly announced stiff tariffs on steel and aluminum imports. A parade of exemptions for most major US trade partners followed: first Mexico and Canada, then the European Union, Argentina, Australia, Brazil, and South Korea. China was conspicuously absent from that list. The country was ready to fight back, starting with the biggest US-to-China export of all: soybeans. “Strong restrictive measures need to be taken against the massive subsidies and dumping of soybeans by some countries on China,” the Chinese state-run English-language publication Global Times declared on Tuesday (emphasis added), leaving no mystery about which country it meant. In a Wednesday Wall Street Journal report, a Chinese government official reiterated the threat of retaliation against US soybeans.

Undaunted, the Trump countered Thursday by announcing a $60 billion in annual tariffs against Chinese imports, on top of the ones already in place for metals. As for soybeans, “The United States stands ready to defend our producers that may be harmed by foreign country retaliation, in particular farmers and ranchers who are often the first to be targeted by trade actions,” a US Department of Agriculture official vowed in an email to CNBC reporter Jeff Daniels.

Of course, the way nations “defend” domestic producers in a trade war is to impose yet more tariffs and other sanctions—which is how trade wars escalate.

Friday’s news that China is considering a 15 percent tariff on most US-grown nuts as well as its fresh and dried fruits put California in the spotlight. Those products are all specialties of the Golden State’s massive, export-directed farm sector. Two-thirds of California’s $5 billion almond crop go to foreign markets, and China is the second-leading destination, after Spain. China’s imports of US almonds rose 21 percent in 2017, but a 15 percent price hike could drive consumers there to choose other treats—as happened during the 2011-2015 drought, when Chinese demand for US almonds dropped due to high prices.

This year’s net farm income will hit its lowest level since 2002.

More than half of the state’s $2.1 billion pistachio harvest is exported, and China is by far the biggest destination. The tariff could push Chinese pistachio eaters into the arms of Iran, California’s only rival in production of the tasty tree nut.

The Midwest remains in harm’s way, too: China’s threat to limit its purchases of US soybeans and pork sent a chill through the grain belt. In its announcement on Friday, China threatened a 25 percent tariff on US pork, imperiling a $1.16 billion market for American growers, Reuters reports. The country has been a massive and growing destination for our pork in recent years, but is now well-positioned to find new sources. China’s own domestic pork production is rising as it rolls out US-style factory-scale hog farms. And pork producers in both Europe and South are emerging as rivals for their US counterparts for the China market.

Americans use soybeans mainly for livestock feed and cooking oil. US farmers churn out nearly twice as much of the legumes as the domestic market can soak up. That leaves them heavily dependent on exporting their bounty—and the China market is by far the biggest prize. Indeed, China buys more than half of US soybean exports, about four times as many as the two next-biggest purchasers (the European Union and Mexico) combined. A reduction in soybean purchases would put downward pressures on prices for US farmers.

The fight comes at a fraught time for Midwestern farmers. After years of bumper crops, prices for soybeans and corn have been stubbornly low for five years; as a result, a February USDA report showed that net US farm income has been steadily declining since 2013. The department projects that this year’s net farm income will hit its lowest level in inflation-adjusted terms since 2002.

In that context, Trump’s trade machinations are a bad look. Pressure from farm country has helped pull Trump from the brink of trade bellicosity in the past. Last April, Trump was poised to rip up the North America Free Trade Agreement, which has led to a boom in US farm exports to Mexico and Canada, the Wall Street Journal reported at the time. But then USDA secretary Sonny Perdue “showed him a map indicating the states where jobs would be lost if the pact collapsed…Many were farm and border states that voted heavily for Mr. Trump.” In the end, Trump opted to renegotiate NAFTA rather than destroy it outright.

In a survey of 750 farmers and ranchers conducted Feb. 26-March 9 and released this week, the trade journal Agri-Pulse reported that 67 percent of respondents said they voted for Trump in 2016—but just 45 percent said they’d support him again in 2020.

“The farmers I talk to are very concerned about trade, and while they are willing to give the President the benefit of the doubt in the hope that his actions will result in better deals, folks are getting pretty nervous,” Missouri farmer Blake Hurst, who leads his state’s Farm Bureau chapter, told Agri-Pulse.