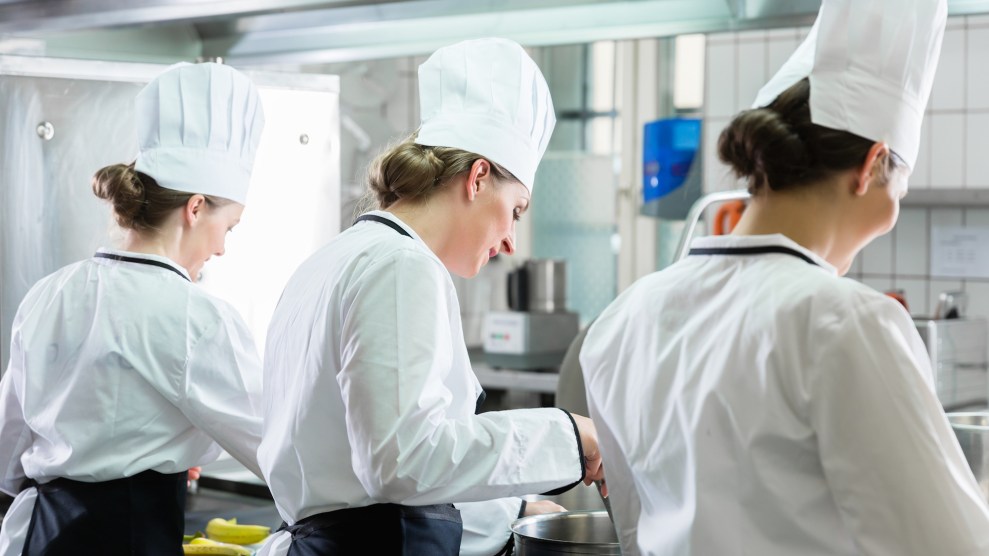 UPDATE (12/12/2017): Anthony Bourdain, whom Tracie McMillan criticized for celebrating and normalizing sexist kitchen culture in his influential 2000 book Kitchen Confidential, has come out with a Medium post supporting women who have experienced sexual misconduct in the restaurant industry. He writes: “To the extent which my work in Kitchen Confidential celebrated or prolonged a culture that allowed the kind of grotesque behaviors we’re hearing about all too frequently is something I think about daily, with real remorse.”

The tsunami of scandals around workplace sexual harassment has mainly hit creative-class professions—acting, journalism, comedy—and high-level politics. But what about working-class women? The question relates directly to food, because the US food and agriculture industries employ 21 million people, around 1 in 9 workers in the US labor force.

To dive deeper into the experiences of the women who feed us, I interviewed the investigative reporter Tracie McMillan for the latest episode of Bite podcast. For her classic 2012 book, The American Way of Eating (my review here), Tracie embedded herself in the trenches of the US food system, working undercover stints in California farm fields, at two Walmart stores in Michigan, and at an Applebee’s in New York City, living on the wages she eked out.

According to a 2016 report from the Food Chain Workers Alliance and the Solidarity Research Cooperative, food and farm workers make a median wage of $16,000 a year, or about $10 an hour. About a third of these workers are women, and they make even less than those paltry averages—less than half of what their male counterparts make.

Among California farm workers, one field is known as the “field of panties” because rape is so routine there.

In these low-wage, low-visibility jobs, sexual harassment—and worse—flourishes. In a 2014 survey by Restaurant Opportunities Center United, 66 percent of female restaurant workers reported “high levels of harassing behaviors” from their managers, 80 percent reported it from co-workers, and 78 percent from customers. A 2012 Human Rights Watch report found sexual harassment and violence a common theme of life for women who work in US farm fields, “fostered by a severe imbalance of power between employers and supervisors and their low-wage, immigrant workers.”

In California’s farm fields, sexual abuse is rampant, Tracie told me—she heard horror stories about a particular area, known as the “field of panties,” to be avoided because rape was so routine there. But she was largely shielded from harassment because of her status as a white among mostly undocumented Mexican women, she said. For most of her stint as a garlic picker, Tracie got kid-gloves treatment, because people thought, “If there’s a white woman working in the fields, something horrible must have happened to her,” she said.

It was while working in the kitchen of an Applebee’s in New York City that she experienced the full force of sexual abuse faced by women in the food system’s shadows. In kitchens, she says, jocular banter about sex is the norm, celebrated and normalized by cultural icons like Anthony Bourdain. In Bourdain’s landmark 2000 book, Kitchen Confidential, what comes through is a” rough-and-tumble, no-rules-apply culture in kitchens,” largely centered on male sexual exploits, she says. In her analysis, the message delivered is: “To be an authentic chef, to be a chef’s chef, you have to be someone who objectifies women.”

The prescribed woman’s place in that world, she says, is to go along, be a good sport, take it and dish it right back, “be one of the boys.” That’s the strategy she took in as an Applebee’s cook—and it worked until it didn’t, to catastrophic effect. In our conversation, Tracie lays out what her experience of sexual assault taught her about what the macho code of the kitchen means for women, and why that code has to be dismantled. And she explicitly calls on Bourdain to do his bit. Give it a listen.